Like most humans, I’m full of self-deceptive coping mechanisms. New York City residents like me sometimes forget that we live on an island surrounded by rising water. Climate change will likely bring major flooding to New York City every five years, and extreme heat is anticipated to become increasingly fatal. But some artists are taking steps to remind NYC that climate change is personal, as I recently learned on a trip to Sherman Creek Park.

The park, one of Manhattan’s only natural shorelines, runs along the Harlem River in my neighborhood of Washington Heights. When I visited this past Halloween, it was teeming with life and imitations of death. Miniature vampires and ghosts scuttled about the low-lying peninsula in search of candy. Picnic tables were clustered with pumpkins and wholesomely spooky crafts to celebrate Fall Fest, put on by the New York Restoration Project.

There was not much at the event that was genuinely haunting, apart from one table: a display of what the city will look like in the future due to climate change.

A blown-up map of New York City was overlain with blue paint showing where flooding will threaten the area’s shores in 2050. The park itself was partially covered in blue. It’s been submerged before, like when Hurricane Sandy hit in 2012.

Melissa Moschitto, a resident of Washington Heights who lived through Hurricane Sandy, explains the flood hazard map to curious passersby. It’s an invitation to engage in conversation about climate change, or to walk just slightly farther to a small peninsula where This Sinking Island, a play directed by Moschitto, is being performed.

The play is the 35-minute brainchild of The Anthropologists, a local theater company that explores social issues through the lens of research and community engagement. They’ve put it on in several locations throughout New York City, including a senior center, library, and children’s museum. Each performance is followed by a conversation with the audience to grapple with how climate change may impact their home. 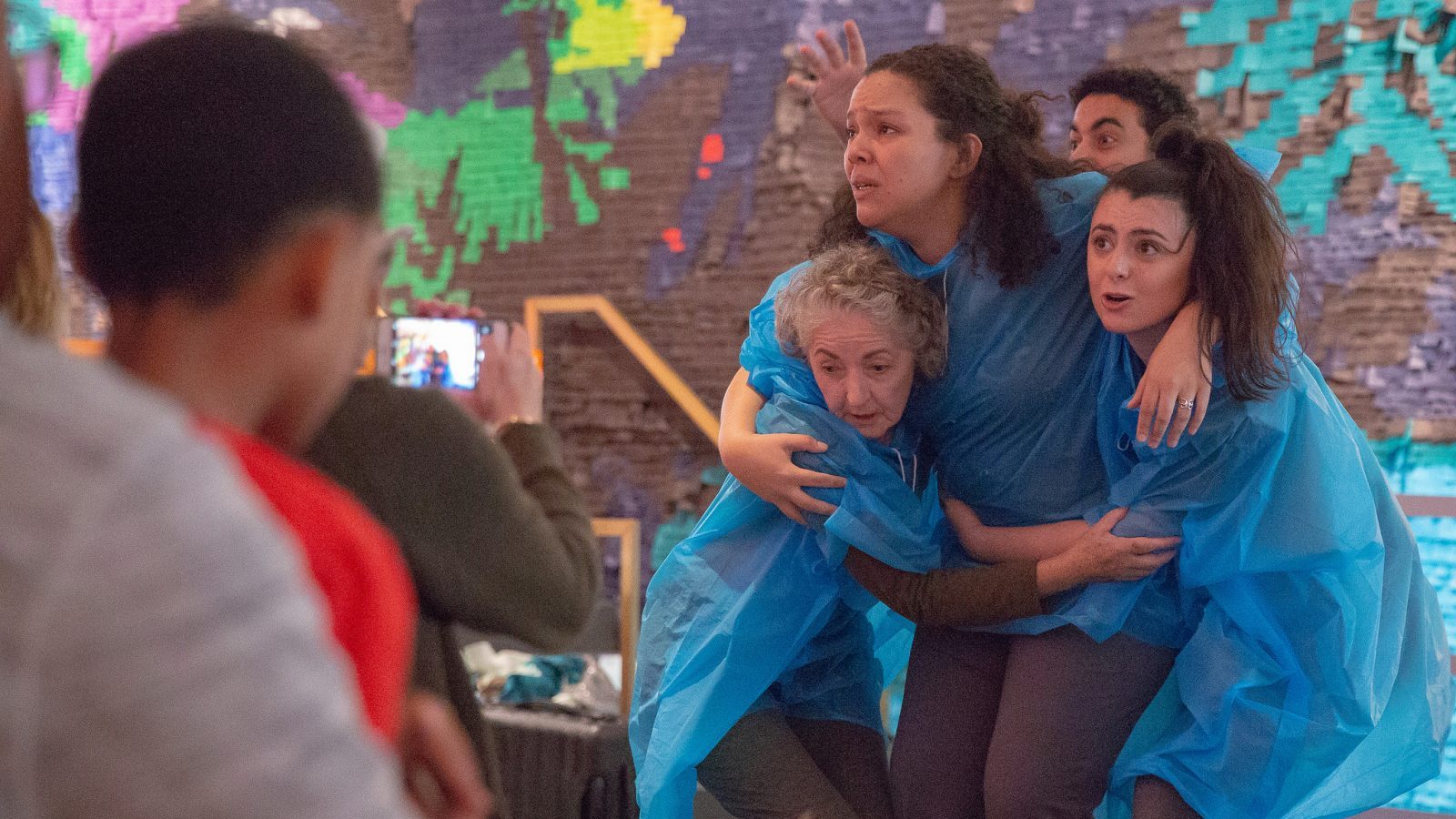 The second half of the play is set in a world warmed by 2 degrees C, a benchmark that the recent U.N. report on climate change warns could be the end of coral reefs, Arctic summer ice, and society as we know it. The play follows three sisters who were displaced from their Harlem home in a flood. As they navigate the watery deluge of Manhattan, they meet another refugee who’s covered in plastic. Their first instinct is suspicion — one of the sisters asks, “Are you the one who caused all the plastic straws and bottle caps to wash up on our shore?” (It’s a reminder of the history of xenophobic scapegoating in environmentalism). The sisters realize their own culpability in contributing to the pollution and join the newcomer to try to find safety among the rising waters.

If The Sinking Island offers guidance on how to survive the coming decades, it’s to remind viewers to trust each other and remember each other’s stories. In one scene, the actors try to fend off the encroaching tide, which is symbolized by a long, blue ribbon of fabric. There’s a small sliver of hope in this scene: The actors collectively control the movement of the fabric. So if they work together, they might just fend off the tide.

As the end of the Halloween performance neared, the sun dipped lower over the Harlem River, and the actors sang a final lullaby. They told the parable of a dog who is crying because it is sitting on a nail. A passerby asked, why does the owner not move the dog? The owner replied that when it hurts enough the dog will move on its own.

It’s too late to catch the play if you haven’t seen it already — the performance I went to was the last one scheduled by the troupe. Moshitto says the larger message is that it’s not too late to do something about climate change. But first, despite our fears, we need to work it into our daily awareness.

“It’s always been even difficult just talking about this show,” Moschitto told me in a coffee shop a couple of days after the play. “We’re making a show about climate change and refugees and the irreversible damage that we’re doing to the planet. And bring your kids.” She laughed. “I’m still working on the one-liner.”

The science of self-care: How climate researchers are coping with the U.N. report