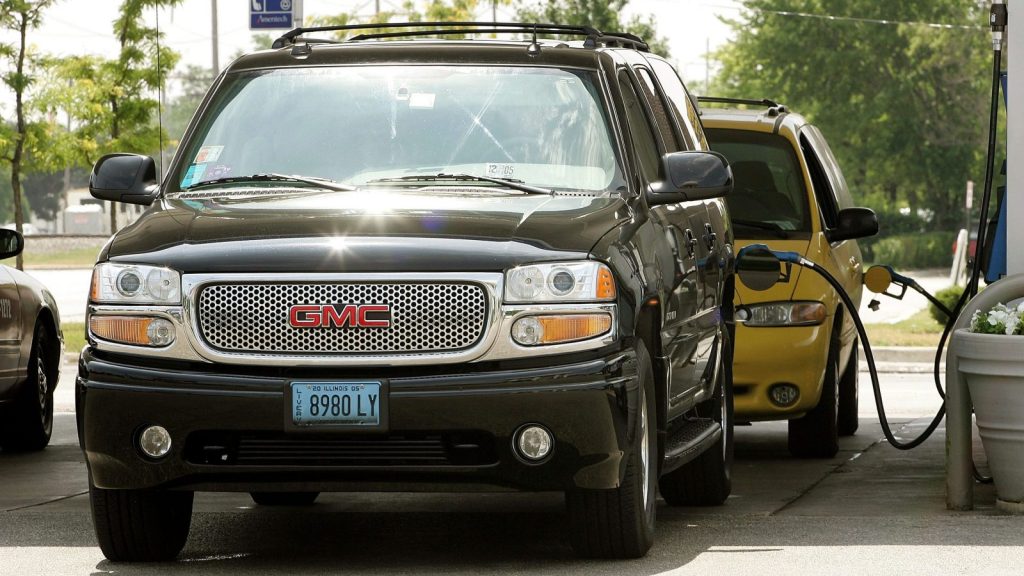 This story was originally published by Bulletin of the Atomic Scientists and is reproduced here as part of the Climate Desk collaboration.

When I pull into a parking lot in my Toyota 4Runner, I hope I won’t see any of my friends who are environmental activists. I hope I’ll fit into the eco-conscious (read: small) parking spaces at some of the places I shop. I feel like a skinny-car person in a fat-truck body.

It turns out that vehicles like mine — known as sport utility vehicles, or SUVs — are even worse for the climate than I had imagined. And I imagined they were pretty bad.

According to a summary analysis of a report by the International Energy Agency that was released on November 13, SUVs are the second-biggest cause of the rise in global carbon dioxide emissions during the past decade. Only the power sector is a bigger contributor.

The analysis, which surprised even its own authors, found a dramatic shift toward SUVs. In 2010, 1 in 5 vehicles sold was an SUV; today it’s 2 in 5. “As a result, there are now over 200 million SUVs around the world, up from about 35 million in 2010,” the agency reports.

The preference for heavier SUVs is offsetting fuel-efficiency improvements in smaller cars and carbon savings from the growing popularity of electric cars. “If SUV drivers were a nation, they would rank seventh in the world for carbon emissions,” reported the Guardian.

I’m part of that imaginary nation. I don’t have kids. I don’t fly often. But I have a big honkin’ SUV that is killing the planet. For those of us who are worried about our carbon footprints, driving an SUV is like wearing a pair of size-18 steel-toe boots.

What’s the attraction of SUVs? Consumers who buy them hand manufacturers a higher profit margin than for smaller vehicles. The weight and boxy shape of SUVs makes them less fuel-efficient, so they cost more to operate and are less nimble than passenger cars. Some people feel safer in a vehicle where they sit high above the road, but the raised center of gravity makes SUVs more prone to rollovers than cars, said Consumer Reports. Some people want an SUV because they believe that an all-wheel-drive or four-wheel-drive option will make them safer in bad weather. In reality, many drivers do not need this expensive and fuel-economy-lowering feature, and would be better off with front-wheel-drive and good tires.

Still, those disadvantages didn’t stop me and my husband from buying a full-size SUV that weighs 4,675 pounds and averages only about 19 miles per gallon. We claim we “need” an SUV to get around in the rural, mountainous area where we live, but somehow we managed to survive here for a decade without one.

People often buy vehicles for reasons that have very little to do with functionality. For many people, an SUV is a status symbol. And that is also true — perhaps even more so — for people who drive hybrid or all-electric passenger cars. A 2007 survey of Toyota Prius buyers found that more than half said they purchased a Prius because “it makes a statement about me.” Some of them are now incensed that Toyota is siding with the Trump administration against California’s efforts to improve fuel economy.

I have the opposite problem. I appreciate the utility of my sport utility vehicle, but I’m embarrassed to be seen in it. Call it “SUVskam,” Swedish for SUV shame. I’m not so ashamed (or wealthy) that I will drive to the nearest junkyard and have it crushed for its scrap metal. But I am doing everything I can to reduce the carbon footprint of my SUV.

What would Greta drive?

SUVskam isn’t a thing yet, but flight shame (or “flygskam” in Swedish) is, thanks in part to the efforts of Swedish teenage climate activist Greta Thunberg to raise public awareness of the carbon emissions associated with air travel. In Europe, many flight-shamed people are switching from planes to trains. Thunberg went a step further, avoiding flygskam by taking a sailboat instead of an airliner when she traveled to the United States — and again when she left for Spain last week. Flight shame has reduced air travel enough to catch the attention of the International Air Transport Association, which is launching a campaign to tout its environmental efforts.

Calculating the carbon emissions of air travel is not as simple as “planes bad, trains good,” though. It’s complicated. It depends, for example, on how far you’re traveling and how many people are traveling with you. The same is true for SUVs. A 16-mpg Chevrolet Suburban carrying six carpoolers is burning less fuel per person than a 52-mpg Toyota Prius with no passengers.

Even if you drive an SUV, there are plenty of ways to reduce your carbon footprint. For starters, not all SUVs are created equal. My 4Runner is a gas guzzler, for sure, but it gets much better mileage than a Mercedes G550 or Jeep Grand Cherokee or Nissan Armada. Hybrid SUVs, which get even better mileage, are available for some models — but cost an average of nearly $4,000 more than their gasoline-only counterparts. Mainstream manufacturers are beginning to introduce all-electric luxury models to compete with the Tesla Model X, which costs more than twice as much as an SUV like mine. GM might even bring back the notorious Hummer as a zero-emissions SUV.

While a plug-in SUV is certainly better for the climate than a gasoline-powered model, automakers aren’t introducing these vehicles because they’re committed to climate action. They’re simply trying to capitalize on the popularity of SUVs, and to make people like me feel okay about choosing an SUV over a smaller electric vehicle that would be better for the climate.

Of course, shame isn’t a solution to anything. Those of us who already own SUVs must try to minimize our carbon footprints by reducing the miles we drive in these beasts — for example, by combining errands and walking or biking or taking public transportation when that’s an option. We can also do our best to maximize fuel efficiency — for example, by removing roof boxes and other items that add weight when not in use, taking it easy on the pedals, and optimizing fuel economy by keeping tires properly inflated.

Finally, SUV drivers can support policies such as higher gasoline taxes and higher fees for licensing heavier vehicles, even if doing so makes it more expensive to drive an SUV. After all, if you can afford to buy a vehicle that costs $30,000 or more, there’s no good reason why you can’t pay a little more than the owners of smaller vehicles toward public transportation and road maintenance. I voted against Initiative 976 in my home state of Washington, but the majority of voters just approved a flat $30 licensing fee for all vehicles — replacing a fee structure in which heavier, more damaging vehicles paid more.

Shame on the White House

Of course, individual actions are no substitute for corporate and government leadership. Whether I drive an SUV or a Prius will make very little difference for the climate. But if Akio Toyoda (the president of Toyota) and Donald Trump (who rides in an armored Cadillac that weighs more than 15,000 pounds) continue to support a rollback of auto-emissions standards, their choices will dramatically increase global warming and air pollution.

As leading climate scientist Michael Mann of Pennsylvania State University recently observed, climate deniers are attempting to deflect attention away from necessary systemic changes by encouraging well-meaning people to point fingers at one another instead of at the fossil fuel industry. Still, peer pressure can help move people toward healthy habits, as the popularity of bicycling has done in places like Copenhagen — where people of all ages ride bikes to work and school in any weather.

There are no one-size-fits-all solutions to climate change. Only by examining our own choices, and demanding that businesses and governments adopt emissions-reducing policies and regulations, can we make the progress that will be required if we are to leave future generations with a stable climate. On November 5, 11,000 scientists published a warning that the planet is facing a “climate emergency” that is “closely linked to excessive consumption” and will result in “untold suffering” if society does not undergo major transformations.

“Excessive consumption” is an apt description for the glut of SUV sales worldwide. SUV purchasing has been called an “arms race,” in which people are buying bigger vehicles mostly for one reason: Everyone else is.