You get to pick the next president. But it has to be Trump, Carson, or Cruz 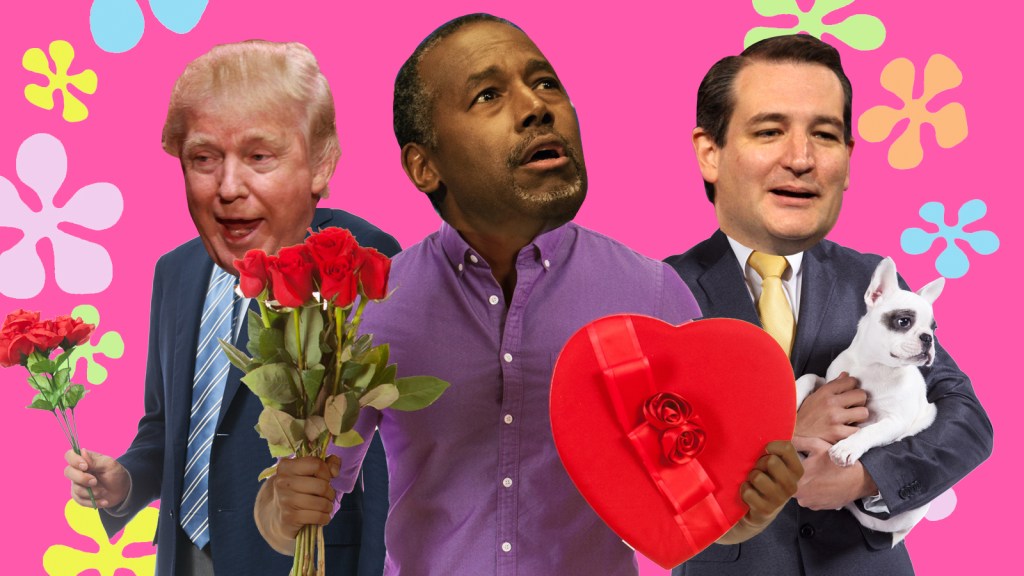 You get to pick the next president. But it has to be Trump, Carson, or Cruz

“I should really get hazard pay for watching this,” I think before every GOP debate. I then fall into a deep depression that is only alleviated by massive amounts of chocolate and the credits rolling across the screen. The last debate was no exception — Donald Trump opened his mouth and I pulled all the ice cream out of my freezer and started looking up Spanish classes in case I need to jump over the “great wall” Trump is planning on building between here and Mexico.

Later, trying to calm myself down and scrolling through Twitter (bad idea, by the way), I came across some brilliant dystopian fiction by Slate’s William Saletan. It’s a game, of sorts, albeit one that’s more terrifying that fun.

“I have a game I like to play with my friends,” Saletan wrote. “It’s called ‘Trump, Carson, or Cruz.'”

“Here are the rules,” Saletan continued, “You have to pick one of these men—Donald Trump, Ben Carson, or Ted Cruz—to be president. You’re not picking the Republican nominee. You’re picking the president. No, you can’t have any of the Democrats, or any of the Republicans you ‘could live with.’ You have to pick one of these three guys. Whichever one you pick will be president for the next four years.”

Grist’s editorial team decided to play along, and while there was some resistance from my esteemed colleagues (“Can we burn ballots instead?”) ultimately most folks gave in and chose the candidates they thought they could best live with. Here are our votes:

Carson. He makes me feel the least murderous and I don’t really want to confront that side of myself. — Eve Andrews

Trump. His comments from the debate on the trillions wasted in the Middle East show there might be a shred of hope he can be swayed when confronted with the tremendous financial devastation climate change will cause if unaddressed. He’s also demonstrated he’ll go against the GOP grain. Cruz definitely won’t. Carson might, but he speaks so slowly his four years will be up right around the time he gets out the final words of his inaugural address. — Matt Grisafi

I pick Carson. I think it would be fun to have a vegetarian president. Vegetarians everywhere could come out of the shadows and stop living in fear of Nick Offerman. — Nathanael Johnson

I would vote for Ben Carson if I had to vote for one of them. Probably only on pain of death. He seems more motivated by his huge ego than hatred. — Valerie Schloredt

Carson. Any of those three as president is a dystopian scenario, but I’d be most entertained (and least offended) by Carson’s gaffes. In any case, it’d be four years of torture with any of these three as prez. — Kate Yoder

I choose Trump. He might be a dick and a sociopath, but he’s a GENUINE dick and GENUINE sociopath. The other candidates are so obviously putting on a show. He, depressingly, is not. — Suzanne Jacobs

In the voting booth, curtain drawn, pen in hand, steeped in dread, sweat beading, here I am; that unholy decision before me. The pen hovers over CARSON, Benjamin Solomon. There is no world in which he is not the lesser of three evils, I tell myself. The pen inches closer. Hummus, says the Carson specter on my shoulder. “It’s Hamas, Ben,” I say, louder than I intend. “For fuck’s sake, it’s Hamas.” I dry heave. I am shushed by an adjacent voter. Twenty minutes pass. Knowing I am forced to choose, I vote for the neurosurgeon in a dim sort of fugue state, eyes half-open, hands Parkinsonian. I revoke my citizenship that evening. — Clayton Aldern

Oof. This thought experiment makes me feel like we’re at the beginning of a Margaret Atwood novel. So you’re asking me which charismatic, Christian right leader I’d prefer to have all up in my ovaries until the world descends into chaos and human meat burgers? Trump. The man has enough corporate panache and does enough religious fearmongering to inspire a new dystopian trilogy by Atwood. If you need me, I’ll be freezing my eggs and joining a doomsday cult. — Darby Minow Smith

Trump. I’m always looking for a reason to leave the U.S. — Aura Bogado

Carson. Even if it’s wrong, I totally get that desire to store things in pyramids. — Heather Smith

Definitely not Trump. He’s a mean-spirited bully, a self-satisfied rich person who thinks he pulled himself up by the bootstraps, and a joke to everyone in the world except apparently the American electorate. But Carson versus Cruz is tough, too. Carson seems like he might do the least damage, or at least the least intentional damage. Who knows what he’ll blunder into? Hopefully he’d have a good cabinet pulling the string behind the scenes. And I feel like it would be good for Republicans to deal with a black president on their side, even a casually and cluelessly bigoted one. — Amelia Urry

As for me, I too pick Carson, for the simple reason that looking at Donald Trump and Ted Cruz causes me physical pain. I hate to body shame, but those guys are fucking hideous, and staring at their evil mugs for years would surely make me go blind. At least Carson is cute: He looked like he ate a handful of Xanax and a milkshake before the debate. Adorable!

Tell us, who is your pick and why? Let us know in the comments, and let’s hope this nightmare stays that: Just a dream. A terrible, horrifying, no-good, never-gonna-happen dream.