Since writing about Seattle’s infrastructure fustercluck, I’ve been thinking a lot about transportation. It’s really a b*tch of a problem.

The internal combustion engine (ICE) vehicle had its disadvantages from the very beginning, not only relative to public transportation but relative to other types of car. (There’s a fantastic chapter in Alexis Madrigal’s Powering the Dream about this history.) But its advantages — power, personalization, and modularity — mattered more. It could go farther than other cars; you could drive it wherever you wanted to go, whenever; and it was small enough to be within the reach of average citizens, who had little control over larger transportation projects.

The ICE car has arguably passed the point when its drawbacks — particulate pollution, traffic, sprawl, climate change — exceed its advantages, at least from a social-welfare perspective. But it is still firmly rooted in human life, almost everywhere, despite much-hyped efforts in some places to boost alternatives. (See, for instance, Curitiba, Brazil, celebrated for its Bus Rapid Transit system, where auto ownership is nonetheless high and rising.) Vehicle miles traveled (VMT) are leveling off in the U.S. and in Europe, which have arguably reached auto saturation, but they are skyrocketing in China and other growing countries. Global automobile ownership is expected to rise and rise and rise. There’s nothing on the horizon that fundamentally displaces or marginalizes the personal vehicle.

Why is that? Well, tons of reasons. But a big one is that public transportation still cannot match the advantages of the car: power, personalization, and modularity. Inter-city trains and buses remain fairly slow and inconvenient. In terms of personalization, public transit routes are still limited, both in geography and in timing, and they face the notorious “last mile” problem, meaning that transit stations are often located too far from homes and businesses to represent a manageable walk. (One note: Cars rely on built infrastructure just like public transit. They are more convenient once roads have been built everywhere. But in most growing and wealthy countries, that’s already a fait accompli.) And, especially here in the U.S., public transportation systems, like all large construction projects, are large and expensive. They come in big chunks.

Does such a thing exist? Advocates of “personal rapid transit” (PRT) say it does. PRT comes in many forms, but the basic idea is that there are fairly lightweight pods that hold a small number of people; they move over fairly lightweight tracks; and, crucially, they do not travel along prescribed routes, but rather can take passengers directly to their destination, with no stops along the way. There are currently four working PRT systems in the world, the oldest of which, weirdly, is in West Virginia.

You can learn more about PRT at the link above. The PRT system that’s really captured my fancy, mentioned by a commenter beneath my fustercluck post, is skyTran, a company that emerged out of the NASA Ames Research Center in Silicon Valley. There are no operational skyTran systems yet, but a couple are in the works. 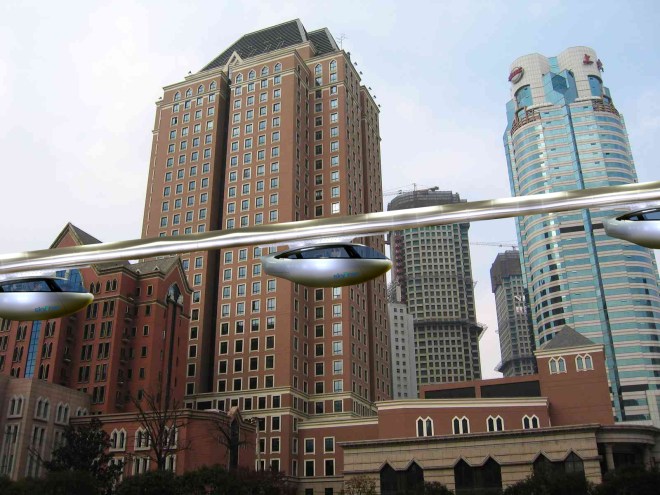 The benefits claimed by skyTran are almost too many too list.

First, the small, two-passenger pods travel via maglev technology, which means the bracket holding the pod is actually levitating over that little rail they’re hanging from. There’s no contact, no friction, and thus much less wear, repair, and replacement. Very little electric power is required to move them; the engineers claim that solar panels over the rails and stations could cover it. (So, aside from construction, no emissions.) Maglev also means high speeds are possible, well over 100 mph, though obviously speeds would be limited in urban areas.

The network of pods would be computer-controlled, so travelers could use a smart-phone app to order one for a particular time and place. It will then whisk them directly to their destination station, with no stops. At the stations, pods move on to a side rail, so they don’t slow or stop other pods. When passengers have boarded, the pods reenter traffic seamlessly.

Perhaps the most important advantage is that the pods and rail are lightweight and modular. Rails can be built alongside existing rights-of-way, hung from poles not much bigger than telephone poles. The rail pieces snap together like Legos, so they can be built or repaired by low-skill technicians, quickly. And they are slim and light enough that they can be integrated with the city, even going through buildings.

The pods will have computers in them that can recognize a passenger’s skyTran card and cue up music, movies, or apps when they enter. 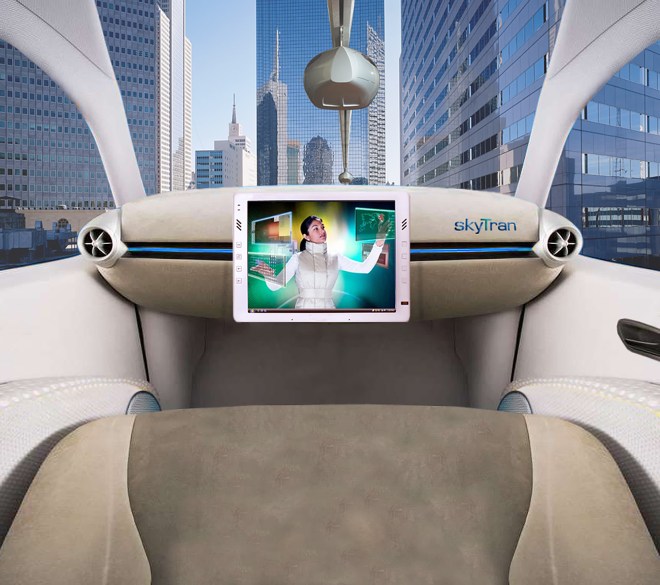 The skyTran folks say they can build these systems cheap, entirely self-financed, without public subsidies (a ride is expected to cost less than a taxi). In June, they struck a deal with Israel Aerospace Industries to build a small, 400-500 meter demonstration loop on IAI’s campus in Tel Aviv, to be completed near the end of 2015. The company is also moving ahead with a 2.7-mile commuter line in Tel Aviv, which it estimates it can build for $50 million, possibly by 2016. Of course, Israel has been known to jump at grandiose transportation schemes that don’t pan out. Remember Better Place? But the company also says it has interest from cities in India, the U.S., and Europe.

Now, I’ve been doing this a while, so I know what comes next. Some math nerd or engineering jock or policy wonk will come along in comments and explain that I’m an idiot, that skyTran can’t work for some reason related to physics or economics or social science, some reason that’s obvious to everyone but an idiot like me.

Fine. Bring it! Go ahead, internet. Crush my latest dream. What’s the reason this can’t work?