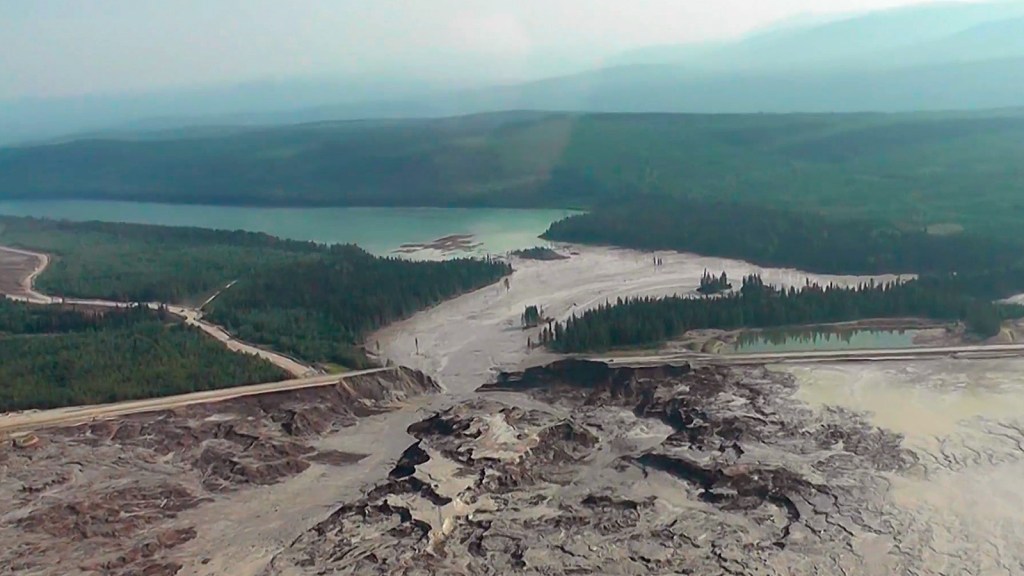 Reuters
The Fault Is Mine

Well, damn. If a picture’s worth 1,000 words, my swear jar just got full enough to send all of the Duggar kids to college.

The photo above shows the results of a copper and gold mine tailings pond spitting more than 10 million cubic meters of discharge into nearby creeks and lakes.

It doesn’t just look ugly. The Monday spill could contain “unknown levels of arsenic, mercury, lead, copper and cadmium, among other toxins and heavy metals.” And the Mount Polley spill is threatening an important salmon spawning ground. Al Jazeera reports:

The contaminated water and debris flowed into a local creek, expanding its width from 4 feet to 150 feet, the ministry’s release said, before entering nearby Quesnel Lake — where many salmon are expected to arrive for their annual spawning in the coming weeks. …

Quesnel Lake and its connected waterways are important habitats for Chinook and Sockeye Salmon, as well as Rainbow Trout and White Sturgeon — an ancient species that can live for more than 100 years and is considered “endangered” by U.S. standards or “critically imperiled” in B.C.

This Canadian spill adds more fuel to the fire for critics of the proposed Pebble Mine in Alaska. The controversial copper mine is planned for a site near the productive Bristol Bay wild salmon fishery. It would be about 10 times the size of Imperial Metals’ Mount Polley mine, NRDC’s Joel Reynolds points out. And the same company that provided designs for the failed B.C. tailings pond was also involved in pushing for Pebble Mine. From Knight Piesold Consulting’s comments on the EPA’s 2012 draft Bristol Bay watershed assessment:

[T]he assessment report is based on a fundamentally flawed premise that considers that a faulty mine design, inadequate mine development, and inappropriate mine operations would be permitted to occur within the state of Alaska.

Oh, phew. For a minute there we were worried, and then we remembered faulty mines are only built in Canada, not the good ol’ U.S. of A. See, here’s Imperial Metals President Brian Kynoch at a news conference on the Mount Polley breach: “If you asked me two weeks ago if this could have happened, I would have said it couldn’t.”