The Amtrak trip north along the Hudson River from New York City is one of the most stunning train journeys in the U.S.  You roll along the river’s east side looking out at dramatic cliffs and lush hills across the water. Near the train tracks themselves, you get the full spectrum of a Rust Belt riverfront’s uses: active and abandoned industrial sites, new loft-style apartment buildings that capitalize on the views, parks and boat launches. The most dramatic building, by far, is the vacant former power plant in Yonkers, N.Y.: a massive, Romanesque Revival brick edifice with two giant smokestacks.

An hour and a half further north, in the bucolic town of Hudson, N.Y., you can get a glimpse of a potential revival for riverfront energy generation. Unlike the Yonkers plant, which burned coal and oil, this is a form of clean, renewable energy with growth potential: small-scale hydropower.

The hydropower plant on Kinderhook Creek, a Hudson River inlet, doesn’t look like a power plant at all. Driving past, you wouldn’t even know it’s there. From the road, all you can see is the smokestack of the adjacent factory that it once powered, which now stands empty, an embodiment of America’s industrial decline. 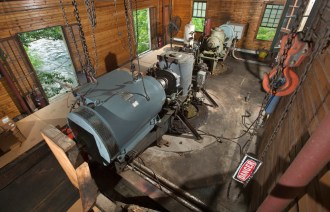 But there is economic activity happening here: In a pair of cabins on either side of the river, electric generators are together producing enough electricity to power more than 400 households in the Hudson Valley. Here’s how: At a natural waterfall, raised by only a two-inch wooden plank, pipes pull some of the water to the riverbanks, where it turns turbines that power generators the size of a couple refrigerators.

The company that owns Chittenden Falls Hydroelectric Project, Gravity Renewables, is a new startup out of Boulder, Colo. “I was at Colorado Public Radio and I was producing stories about energy and the environment,” recalls cofounder and CEO Ted Rose, a 43-year-old former journalist. “Every time one of my guests said the word ‘kilowatt-hour,’ the audience got lost. That’s when I realized the enormity of the disconnect between people and the way electricity is produced. Given that electricity production is such a big piece of the climate puzzle and therefore something everyone had a stake in, I took this as a very interesting communications problem that was also a business opportunity to solve. I joined an energy firm after that and haven’t looked back.”

The Chittenden waterfall has been used to generate power since before there was even electricity: In 1809, a paper mill opened on one side of the creek using mechanical power from a wheel the water moved. That was followed by a succession of different factories and mills on both sides. But by the 1960s they had all closed.

In 1979, a New York–area businessman named Paul Eckhoff bought the derelict property and turned it into a small-scale hydropower plant. The local energy utility is required by law to buy hydropower from an independent plant at the same wholesale rate it pays for energy from other sources. It’s hard, though, to make a profit selling power for the same price as much larger hydro projects or natural gas plants. The hydro plant went out of business and was bought by a succession of owners, including three high-school buddies who Rose speculates might have hoped to capitalize on its electricity production to grow weed. (Growing pot is very energy-intensive and unusually high electric bills can lead to growers getting caught.) Whatever their plan was, it never came to fruition.

Then in 2013 Gravity Renewables bought the hydroplant. Gravity had a plan for making it economical. In New York state, small-scale hydropower can be sold to a third-party buyer at retail prices. It’s called remote net metering. Net metering is when you send power you produce, from a solar panel, for example, back into the grid and get a credit for each kilowatt-hour off your electricity bill. That’s not useful for a power plant that doesn’t use nearly as much electricity as it produces. But through remote net metering, it can “sell” its electricity to another buyer.

Gravity has acquired a total of seven sites, six in the Northeast and one in North Carolina. “The story is the same all over the Northeast and Southeast, because of shuttered textile mills,” says Rose. In some cases, the company is looking at literally selling directly to a third party, like a nearby factory. But under remote net metering, Gravity doesn’t have to actually sell it physically to the buyer.

For Chittenden Falls, the buyer is Skidmore College, over an hour away in Saratoga Springs, under a contract it signed last year. National Grid, the local energy utility, treats the Chittenden Falls site as if it were on Skidmore’s campus. For every kWh that Gravity sends to the grid, Skidmore gets a credit on its electric bill for the full retail price. Then it pays Gravity a price they have agreed to that falls between the wholesale and retail prices. Chittenden Falls is now producing roughly 18 percent of Skidmore’s energy. It’s a win-win-win: New York gets a cleaner source of energy, Skidmore saves money, and an unused industrial site is repurposed.

Of course, National Grid is effectively subsidizing it by paying retail instead of wholesale rates for the power, which is why we’ve seen utilities across the country opposed to any form of net metering, nevermind remote net metering. Remote net metering and similar programs like community net metering are only available in a handful of states, mostly in the Northeast. And net metering, while more widely available, is under assault from utilities, fossil fuel companies, and right-wing billionaires like the Koch brothers.

The conversation about renewable energy in the U.S. tends to focus entirely on wind and solar. Hydro, which accounts for 6 percent of the U.S. energy portfolio and 18 percent in New York state, tends to be largely forgotten. That’s because just about all of the large-scale dams and hydropower plants that could be built already have been. And large-scale hydro has negative environmental impacts, drowning areas by building up a lot of water behind dams, and replacing free-flowing rivers with stagnant, sediment-filled water, which harms aquatic life. But small-scale hydro has a much lower environmental cost, especially when it uses a natural waterfall.

Environmental impact “is largely about the amount of water storage (the reservoir size behind the dam),” explains Karen Kellogg, a professor of environmental studies at Skidmore who brings students to see the Chittenden Falls hydro project. “Greater storage essentially leads to greater sediment buildup, greater changes in streamflow regimes, greater changes to the aquatic communities, greater human population displacement, greater risk to the downstream natural and built environments should there be a failure to the dam, and greater greenhouse gas emissions (although even large hydro is really good on the greenhouse gas front compared to more conventional electricity generation),” she explains in an email.

Small run-of-the-river hydro has a lower carbon footprint than large hydropower dams because it doesn’t cause flooding that releases carbon from vegetation and soil. “Run-of-river dams or weirs, like Chittenden, have the lowest impact, especially considering that there was already a natural abutment in the stream,” Kellogg says. “In terms of environmental impact, this is as low impact as you can get.”

And, while the Chittenden Falls plant has only one employee, it now doesn’t sit empty inviting teenagers to vandalize it. “Instead of a social liability, it’s become a social positive that contributes to the tax base,” says Kellogg. And while the energy production is tiny in the grand scheme of things, it’s that social mission that animates Gravity Renewables as much the environmental benefits. Says Rose, “It’s our mission to revitalize and preserve places with a history in their community.” Deindustrialization won’t be reversed, but its effects can be mitigated through the work of green entrepreneurs, one tiny hydro plant at a time.