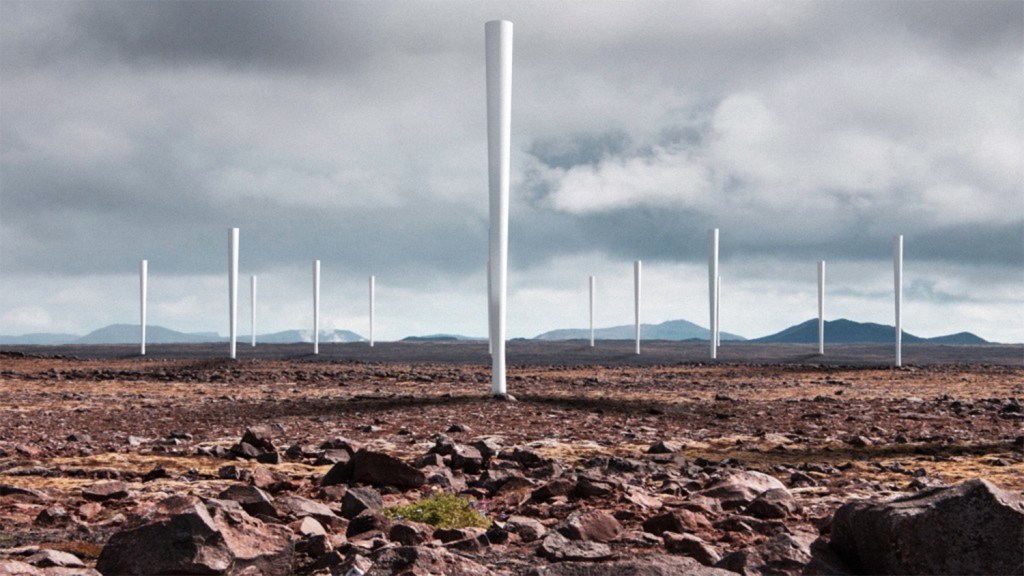 That sounds like a joke, but that’s actually more or less the model of a new wind turbine prototype. Instead of blades that turn in the breeze, the turbine is just a hollow straw that sticks up 40 feet from the ground and vibrates like a guitar string when the wind thrums by.

The Spanish engineers who founded Vortex Bladeless in 2010 said they were inspired by the Tacoma Narrows Bridge disaster (maybe not the best pitch for clean energy to a disaster-wary public, but I’ll leave that to their marketing department). Here’s how it actually works, from Wired:

Instead of capturing energy via the circular motion of a propeller, the Vortex takes advantage of what’s known as vorticity, an aerodynamic effect that produces a pattern of spinning vortices. Vorticity has long been considered the enemy of architects and engineers, who actively try to design their way around these whirlpools of wind. And for good reason: With enough wind, vorticity can lead to an oscillating motion in structures, which, in some cases, like the … Tacoma Narrows Bridge, can cause their eventual collapse.

At the base of the cone are two rings of repelling magnets, which act as a sort of nonelectrical motor. When the cone oscillates one way, the repelling magnets pull it in the other direction, like a slight nudge to boost the mast’s movement regardless of wind speed. This kinetic energy is then converted into electricity via an alternator that multiplies the frequency of the mast’s oscillation to improve the energy-gathering efficiency.

The result is a turbine that’s 50 percent less expensive than a bladed one, nearly silent, and, as one of the turbine’s engineers put it, “looks like asparagus” (sorry, Quixote). And while each Vortex turbine is also 30 percent less efficient at capturing energy, wind farms can double the number of turbines that occupy a given area if they go bladeless. That’s a net energy gain of 40 percent for you non-mathletes out there.”

Plus, the turbine has no gears or moving parts; theoretically maintenance could be much easier than a traditional bells-and-whistles spinning one. No shade to my three-bladed friends, but I can’t complain about a cheaper, more accessible wind-powered future.