Jackson, Miss.: Not exactly the eco-capital of the world. The city’s wastewater disposal has the attention of the EPA, Mississippi Gov. Phil Bryant is a big fracking supporter, there’s no glass recycling within city limits … and so on. But longtime organizer Kali Akuno has a vision: He and 100-plus volunteers want to turn the hardscrabble city of roughly 170,000 into a marvel of sustainability and social justice.

Akuno is a co-founder of Cooperation Jackson, a community network that aims to solve the city’s most intractable issues — poverty and unemployment, racial and economic injustice, food access and industrial pollution — through developing a series of cooperatives that radically re-imagine how people live and work. Cooperation Jackson, less than a year old, is one of the pilot communities of the Our Power Campaign, an effort launched by the Climate Justice Alliance (CJA). And its end goal, like CJA’s, is to transition out of fossil fuel dependence by supporting localized economies, low-income communities of color, and the planet all at once.

Akuno has an impressive background in community justice work — he works with such coalitions as the Malcolm X Grassroots Movement and the People’s Assembly, he started a school serving low-income African American and Latino youth in Oakland, Calif., and he’s the former co-director of the U.S. Human Rights Network, among other things. (The city of Jackson may soon pass a Human Rights Charter that Akuno was a part of initiating, too).

But he’s especially jazzed about Cooperation Jackson’s mainstay, the Sustainable Communities Initiative. The plan is to buy up abandoned land and dilapidated properties and organize them into a Community Land Trust. On it, there’ll be an “eco-village,” or group of green homes where people can share tools and facilities, making it both planet-friendly and affordable. There’ll be urban gardens (including hydroponics, aeroponics, and aquaponics), a waste management and recycling system, a child care center, and an arts center, all run by community-owned cooperatives that will provide paying jobs to local residents. One of Akuno’s long-term goals is to turn Jackson into a zero-waste city.

I spoke with Akuno recently about social and environmental justice, politics, history, and building a green utopia. Here’s an edited and condensed version of what he had to say: 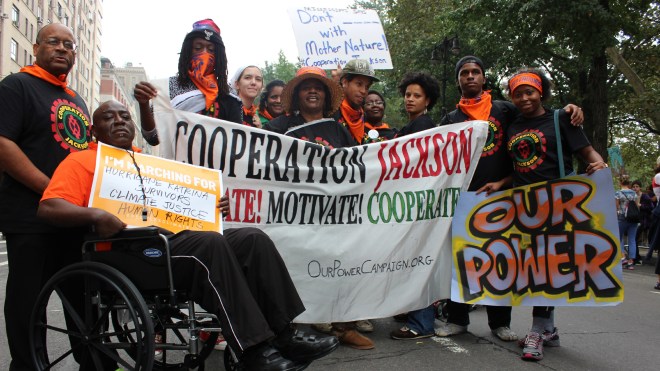 A. It’s something that’s been on my radar for well over a decade, actually. It was part of some thinking and planning that the Malcolm X Grassroots Movement had been doing. And cooperatives wound up becoming a real central focus for me. How do we deal with some of the real hardships and material limitations that so many working people face? That’s been a long term focus and it’s just kind of taken a while to put all the social forces and pieces in place.

The real genesis of it, though, was us planning the Jackson Rising: New Economies Conference. Through that process, [Cooperation Jackson] went from a planning committee at a conference, to an organization, which was intentional.

Q. How about the zero waste idea?

A. [As part of] the environmental justice fight, we started thinking, OK, what are the things we really can do, what really can a social movement accomplish? Changes in the policy framework — that would be the most lasting thing that would survive into the future. So how do we change the practices of municipalities, how do we have an impact there? That’s where the zero waste came from. How [do we make sure] the city goes about doing all its procurement and operations in a manner that doesn’t further support the extractive economy?

Q. So you’ve been working on environmental justice issues for a while now?

A. Oh yeah, environmental justice is something that’s been on our radar screen and agenda for a long, long time. There was a major campaign around fighting toxic dumping in Mississippi. And around all of the toxins and carcinogens and antibiotics that were used in both the chicken farms and catfish farms here in the 1990s.

[Today], in Jackson, there are some key environmental justice issues. No. 1 is water quality. The city is under consent decree already from the EPA about how bad the quality is. Jackson’s pipes are extremely old and antiquated. They’ve burst, there’s a lot of seepage, a lot of contaminants that are in there that spill off into communities. That’s one problem. Another major problem is that Jackson has a lot of lead paint and asbestos buildings still that people are living in. So remediation around that stuff — that’s one of the ways the eco-village comes in and why that’s so critical. Beyond that, there are some air quality issues particularly in parts of south Jackson. Because of some factories there, we’ve got high rates of asthma concentrated in those communities. That’s a big one we’ve been involved with and continue to be involved with.

Q. What does it mean to be an Our Power Campaign pilot site?

A. First and foremost, it puts us into a broader network of allies who are thinking the same, acting the same, planning the same. We have folks to look to: How do they build cooperatives in Black Mesa and in Detroit? And it’s more muscle. We’re really in the fight! We’re not alone! Going up against the city council, going up against the state government — as we’re waging campaigns, there are resources and allies that we can fall on to lend technical expertise, mobilization, and support that without this kind of capacity would be hard for us to do.

Q. What are some of the obstacles to getting this thing off the ground?

A. For a beginning organization, in a very poor state, in a very poor neighborhood, we are still having to raise capital, which is not very familiar to folks here — not the type of money we’re talking about. So, we’re in a major fundraising drive to raise every stone and rock and contact that we have to try to get some support for it. What we have, we think, is really a modest goal — we think with a minimum of $500,000 we can make a serious transformation in this community, and an impact that will last for generations.

But I think the biggest challenge for us, now and in the long term, is we’re not going to be able to move and develop cooperatives as fast as the demand dictates. That’s critical, just because of what real unemployment is here in Jackson. It’s very, very high. Compared to other parts of Mississippi, Jackson is well off. But if you look at national averages, and people’s concrete lives — it is a very poor community, very impoverished.

Q. Your hopes for the future?

A. We have an integrated plan of how to develop a new, transformative economy. It’ll build our strength, and more importantly, in the long term, beat back gentrification and displacement. We want folks to come into the neighborhood and see it, and from that, expand out from there to other parts of Jackson. And then hopefully other folks will say, hey, we can do that in Seattle, in Portland, in Boise!

The typical pattern in 20th and 21st centuries has been that [black communities] are moved — through redlining and other practices — from one area to another. When black people move in, the value of the neighborhood depreciates, there are less services, less stores, less amenities. Over time, the neighborhood deteriorates. Will black communities ever find a way to beat that? Well, we’re gonna try and beat it.

And there’s enough capacity to actually go around. This is the first place I’ve ever lived in my life where I can say that. We actually have people who want to do the work, are trying to engage in the work, and are pressing it forward as best they can. We’re in a really good situation as far as that’s concerned. Things are picking up; we’re in a good place. We’re really looking forward to 2015.

Lousiana has a crazy plan to save its sinking coastline