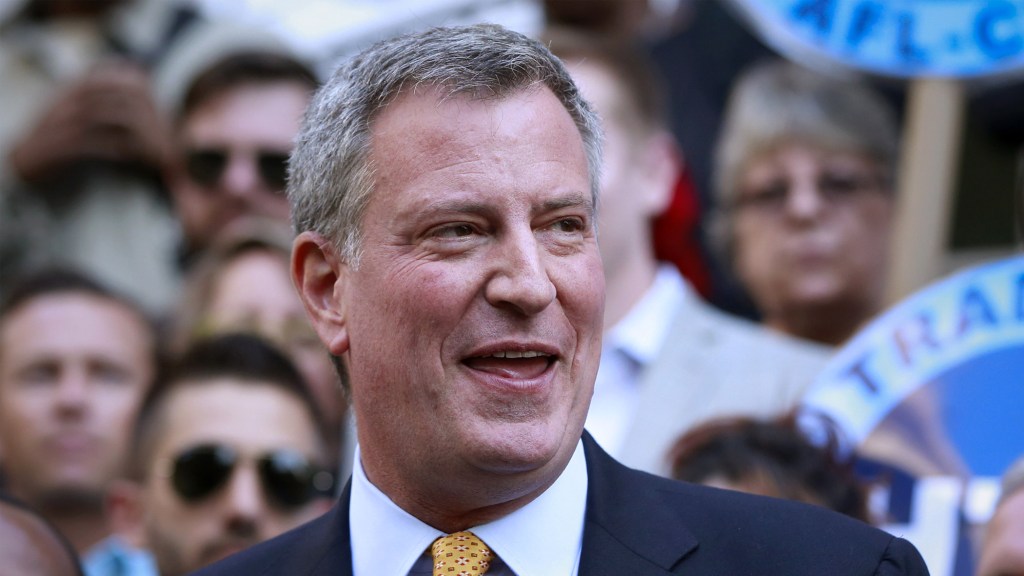 Unless he is caught in bed with a dead girl or a live boy, as the aphorism goes, New York City Public Advocate Bill de Blasio will be New York’s next mayor. He is the Democratic nominee in an overwhelmingly Democratic city, and his enormous lead over Republican Joe Lhota, 45 points in the latest New York Times/Siena College poll, reflects that advantage.

“On every issue, Bill de Blasio is the true progressive choice,” boasts his campaign. And pundits from the national press — in Politico, The Nation, The Washington Post, and elsewhere — have echoed this claim. Much like President Obama, de Blasio has won liberals’ hearts with his charming multi-racial family and his appreciation for hip-hop, while winning their minds with rhetoric about social justice and a few policy proposals to match it.

But there is a notable exception to de Blasio’s otherwise forward-thinking liberalism: transportation policy. De Blasio praises outgoing Mayor Mike Bloomberg’s commitment to addressing climate change, and he pledges to continue it. But on the related, and urgent, need to reclaim New York City’s streets from cars for bicyclists, pedestrians, and mass transit users, de Blasio has been vague, and even sometimes reactionary. And some of his most recent comments on the issues are especially troubling.

During his tenure representing a city council district in Brooklyn, de Blasio disappointed alternative transportation advocates by opposing Bloomberg’s visionary congestion-pricing plan, which would have charged drivers for entering Manhattan during business hours and used the funds to support mass transit. As the city’s public advocate, de Blasio expressed reservations about a controversial bike lane near his house. Most indefensibly, in 2012 de Blasio filed an amicus brief on behalf of the taxicab lobby, which has donated generously to his campaign, against a plan that would make it possible for outer-borough residents to hail livery cabs.

But then it seemed that de Blasio had come around on transportation issues during his campaign. He proposed a comprehensive pedestrian safety plan [PDF] that would reduce speed limits in some residential areas, install new cameras to catch drivers speeding, and increase enforcement from the NYPD. De Blasio also said he would expand the bike lane network. Complete Streets activists — such as Streets PAC, which gave de Blasio its endorsement in the Democratic primary — were convinced that he had evolved.

De Blasio’s recent statements on transportation call that into question. In last Tuesday’s mayoral debate, he was asked about the pedestrian plazas installed in Times Square and Herald Square by Bloomberg’s transportation commissioner, Janette Sadik-Khan. “I have profoundly mixed feelings on this issue,” said de Blasio. “I’m a motorist myself, and I was often frustrated, and then I’ve also seen on the other hand that it does seem to have a positive impact on the tourist industry. So for me the jury’s out on that particular question.”

Actually, the jury reached a verdict a long time ago. A city government study found in 2010 that the plazas resulted in a “63 percent reduction in injuries to motorists and passengers and a 35 percent reduction in pedestrian injuries” in the areas, and an average taxi speed increase of 7 percent in West Midtown Manhattan. And while drivers may not like giving up some of their road space, most New Yorkers don’t own cars, and polls show that a strong majority of New Yorkers support the plaza program.

De Blasio is also sticking with his benefactors in the taxi industry. He says New York has become “a tale of two cities,” one rich and one poor, but his concern for the poor does not seem to extend very far into transportation policy. It is a matter of economic and environmental justice that residents of less affluent neighborhoods should have the same access to transportation as Manhattanites. And it is the ability to hail a cab when you need one that allows many New Yorkers to avoid owning a car and thus drive less.

Cabs primarily serve Manhattan south of Harlem. According to Eric Goldwyn, a doctoral candidate in urban planning at Columbia University who’s writing his dissertation on transportation in New York City, 97 percent of all yellow taxi rides originate in Manhattan or at the airports.

Paradoxically, it is low-income residents, who mostly live in far Uptown Manhattan and the outer boroughs, who most need cabs because they are less likely to own cars. If you can’t hail a taxi — and you can’t, unless you live in prime Manhattan — you must either call a car service, which tends to be more expensive, or illegally hail a car service on the street, which can be more expensive still. According to a 2007 study by the New York City Taxi and Limousine Commission (TLC), New Yorkers in the lowest income quartile were actually the most likely to use cabs. “Time is really valuable to them because they need to get to work, they need to get to daycare, they’re doing a lot of multi-tasking,” explains Goldwyn. “You can’t be late to a retail job: You’re a minute late, you’re fired. The unreliability and infrequency of mass transit is unconducive to their high-value trips.”

To address this injustice, the city has introduced a program that would give out taxi licenses — known in New York as medallions — to up to 18,000 livery cabs. They would be allowed to pick up street hails and run on a meter anywhere in the five boroughs outside of Manhattan, and in Manhattan above 96th St. on the East Side and above 110th St. on the West Side. This would benefit everyone, except one entrenched interest group: the owners of yellow cab medallions, which are worth millions of dollars because of their scarcity.

“There is more demand for cabs than there is supply, it’s that simple,” says Goldwyn. “We don’t add to the number of medallions because people who own medallions want to keep the price high so they can profit from it, but that doesn’t do much for the rest of us who want to take taxis.”

The medallion owners have given generously to New York politicians to prevent issuing more medallions, including de Blasio, who has gotten more than $350,000 from them. And so de Blasio went to bat for his buddies, complaining that the outer-borough taxi plan would diminish the value of medallions. So far, the plan is being implemented — in June a judge sided with the City and against de Blasio and the taxi lobby — but once he’s in City Hall, de Blasio could order the TLC to stop handing out medallions.

Asked recently about the issue by WNYC and then again by Newsday, he prevaricated, offering vague assurances that he will place the public interest first, with no specific commitments to any policies.

And so it remains to be seen whether de Blasio will be a true progressive on transportation.

“A progressive is going to fight for equity among different transportation modes, and advocate for more balance and equal access to the road,” says Goldwyn. “A pedestrian plaza is clawing back road space from cars. There are more pedestrians than anything else in New York City. The majority of road is not given over to transit or pedestrians, it’s given to private automobiles, and we can do better if we have a more equitable distribution of the street.”