Even Detroit is hatin' on freeways now 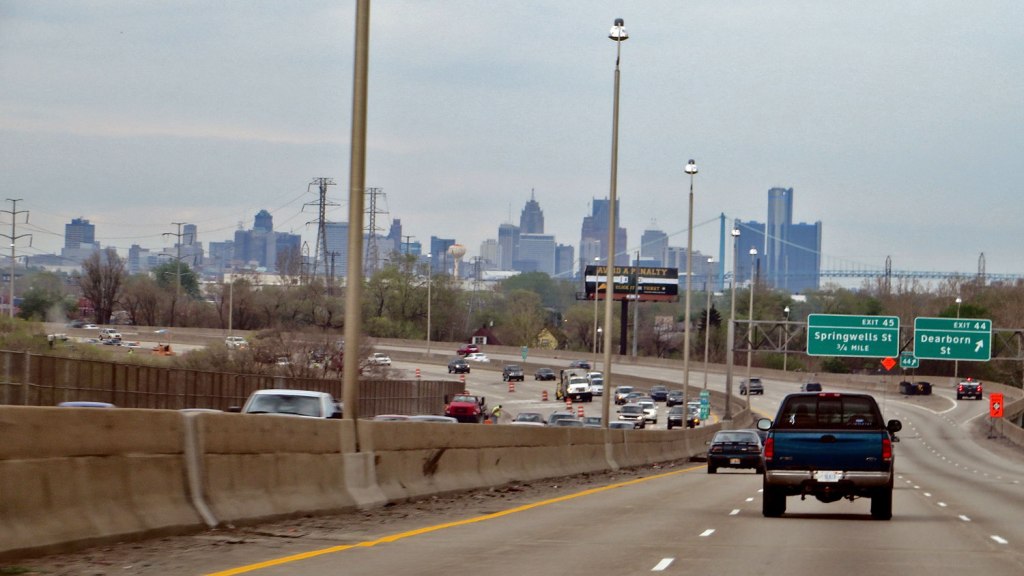 Even Detroit is hatin’ on freeways now

When the mayor of the most car-centric city in history/the world/the universe starts talking smack about freeways, what does that mean? The mayor in question is Mike Duggan, the city in question is Detroit, and when I read recently in the Detroit News that Duggan believes that the freeways that wrap around Metro Detroit like a giant hairnet were maybe not such a great idea, and played a major role in Detroit’s steep economic decline, I thought I must be dreaming.

“Freeways cut off and isolate neighborhoods,” Duggan said, with the air of someone who has been boning up on his Urban Planning 101. “We are still trying to recover from that.”

Something is afoot in Detroit. More precisely, the Motor City has spent the last year studying the implications of doing what plenty of other cities have done, but which Detroit has yet to get into — tearing down a highway, I-375.

Sixty years after they began, are the freeway revolts over? Have the naysayers finally won? Well, it helps that the 375 is a highway without a massive fanbase. Even in metro Detroit, where freeways are so ubiquitous that living without them seems unimaginable, it’s hard to find someone upset about tearing it down. It’s less than a mile long; until 2007, it was the shortest segment of interstate in the country.

It seems to have been built for one purpose: to provide highway access to the residents of Lafayette Park, a 78-acre Mies Van der Rohe-designed complex of high modernist townhouses and apartment buildings that functions like a separate suburb built within the city. In 2007, Julia Vitullo-Martin described it this way in the Wall Street Journal:

For the first-time visitor, Lafayette Park has an almost Through-the-Looking-Glass quality. From the noisy, hardscrabble street one enters beneath a luxurious canopy of greenery into a mysteriously quiet scene of lush landscaping, walkways, roads, retaining walls, partially concealed houses, and towers rising out of the trees. It somehow feels like a lovely but futuristic New England town.

Called “oft-overlooked” by the Harvard Design School and “a little-known jewel of modern urbanism” by Detlef Mertins, a professor of architecture at the University of Pennsylvania, it should be renowned, both for its loveliness and for its ability to thrive through Detroit’s dark times of riots, destruction and middle-class flight.

“Black Bottom, Paradise Valley, was indeed a paradise for black entrepreneurial businesses,” said Sidney Barthwell Jr., 66, a 36th District Court magistrate whose father, Sidney Barthwell, ran a chain of pharmacies and ice cream shops in Black Bottom. The Barthwell business network, among the most important black businesses in America at the time, was mostly wiped out by the freeway construction.

“Funeral homes, doctors — there were a dozen different black-owned hospitals (in Black Bottom), because in those days, they wouldn’t admit you into the major hospitals if you were African-American,” Barthwell said. “The Detroit black community in its heyday was absolutely fantastic. It was better than Harlem.”

When Black Bottom was demolished to make way for Lafayette Park, so was the economy that had grown up there. “It, in essence, destroyed my father’s business,” Barthwell told the Free Press. “Basically, everybody had to move out. It was devastating, and it’s never been the same again. Kind of like a black diaspora. We went all over, where we could get in.”

Getting rid of I-375 will be fairly easy (if expensive — it will cost an estimated $80 million, though some argue that is less expensive than maintaining it). Other freeways will be more obstinate.

Some city bigwigs fantasize about getting rid of I-75, the other highway that divided much of Detroit from itself. I-75 is about six lanes minimum, running all the way from Northern Michigan to Miami. “The freeway created both a physical and emotional barrier, and it wasn’t good for that neighborhood,” developer Christopher Ilitch told the Detroit News. “We need to get rid of that barrier in a creative way. No doubt about it: It’s essential to connect those neighborhoods again.”

Pay no mind to the fact that the thing that has contributed the most to severing downtown Detroit from the pedestrian-friendly bubble around Wayne State University has not been I-75, but Ilitch’s dad, Little Caesar’s Pizza baron Mike Ilitch. For decades, the senior Ilitch secretly bought up buildings along Cass Corridor, let them decay so that they brought down property values around them, and then bought more buildings, until he had amassed about 50 blocks of well-located but increasingly dilapidated real estate.

Two years ago, the Ilitches went to the end stage, convincing the bankrupt city to pay to help the family build shops, market-rate housing, and a new hockey stadium on the site by issuing a bond connected to Detroit’s future business tax revenues. The site, which has the dystopian sci-fi name of “District Detroit,” is currently a pile of smashed rubble beneath billboards that read, “Imagine: A Place.”

Making Detroit more walkable is a good thing — 26 percent of households in the city don’t have cars, which is less a measure of local environmental sentiment than sheer poverty. But when the city signs on to help project like District Detroit — a project that feels more like a relic of the bad old days of urban redevelopment than the city’s future — it leaves a person wondering if the Detroit is still wrapped up in fantasies of what the city might be, instead of making it a better place for the people who live there in the here and now.

Detroit needs nice sidewalks, sure. Doesn’t everyone? But it also needs a functioning bus system that can reliably get Detroiters to their jobs. And it needs to remember the past, so that it doesn’t repeat it.