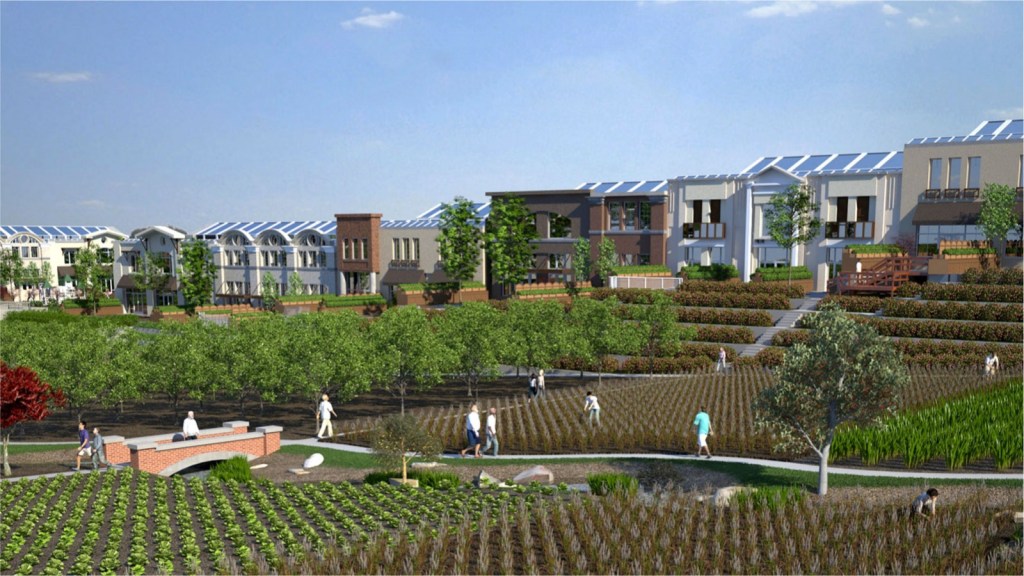 NewVistaFoundation.org
If You Build It, They Will Groan

The tiny towns in Vermont’s Upper Valley are practically postcard-worthy: White steeples, general stores where the owners know your name, rolling hills dotted with spirals of hay and contented cows. But because they are located just off Vermont’s major highway, Interstate 89, and because fiercely independent landowners have historically opposed the idea of zoning regulations, these communities frequently face challenges to their idyllic image. Self-storage companies, cell providers, retailers, and developers have put forth decidedly unbucolic plans plenty of times over the years; sometimes they win, and sometimes — as in the case of a recent effort to build a mixed-use development spurned by environmental groups — they lose.

Now residents of the area have learned about an unfolding real-estate project whose scale and ambition dwarfs anything they’ve seen before. As reported by local news outlets last week, a Utah businessman who made his fortune supplying the gas and oil industry with drilling technologies has spent $3.6 million on 10 real-estate transactions since the fall, buying up 900 acres in four neighboring towns. The purchases are part of a quest to develop a 5,000-acre, $5 billion sustainable community that takes its inspiration from Mormon founder Joseph Smith.

It turns out the Mormons might have been some of the earliest advocates of sustainable cities. In 1833, Smith drew up a design for a mile-square city plot that was intended to be mixed-use, walkable, and edged by farmland that would produce food for the 20,000 people living within. Smith apparently envisioned 50 of these 20,000-person, mile-square units laid out cheek by jowl, creating a metropolis of 1,000,000 very happy, well-fed people; eventually, he suggested, the model could “fill the world.”

The design was meant for the establishment of Zion, a community to be built in Missouri, but the Mormons were driven out of the state before the vision could be turned into reality. Nearly 200 years later, David Hall of Provo, Utah, thinks the idea of a “fully integrated live-work-cultivate environment” still has merit — and wants to see it come to life in the hills of Vermont.

Why Vermont? Because Joseph Smith was born here. A 40-ton commemorative obelisk made of locally quarried granite shares a hillside with a Mormon meeting house in Royalton, one of the towns where Hall has bought property. Somewhat incongruously, this verdant site marks the birthplace of a leader whose followers are typically associated with the desert landscape of the West. (Smith himself never made it farther west than Illinois, where he was jailed in 1844, then attacked and shot by a local mob.) Although Hall says the development project is “not a religious thing” and would be “open to everyone,” it’s the Smith connection that has him opening his wallet.

And that wallet is fatter than most people in this area, which has an average per capita income of about $26,000, can imagine. Hall, 69, has created an entity called the NewVista Foundation and, according to the local Valley News, armed it with at least $100 million to see this project through. His wealth comes from Novatek, an engineering company founded by his father that developed synthetic-diamond drilling technologies used by the fossil-fuel industry. Hall is president of the company, which was recently acquired by oil-industry multinational Schlumberger; he is, according to his LinkedIn profile, “Utah’s top patentee with over 450 patents granted and sold and an additional 400+ applications in progress.”

In some ways, the NewVista concept is a green dream. Drawings on its website show people strolling past and farming near attractive-enough houses and mixed-use buildings. The site talks of encouraging “healthy living and harmony with nature,” of “an urban environment in which natural beauty is everywhere,” of reducing the cost of living for low- and moderate-income families, of shrinking ecological footprints and doing away with commutes. The NewVista model is described as “safe, beautiful, and low-stress” and, in line with Smith’s original vision, “could be replicated to encompass all of the earth’s billions of people.”

Then come the nuts and bolts. Each community would be run by a board of trustees. Each hyper-local economy would be powered by up to 500 small businesses — VistaBizzes! — supported by a collective fund, and all able-bodied adults would be required to work. When you move in, you would sell your stuff (no car needed!) and put all your resources “beyond what is needed for day-to-day operations” in a community treasury. You’d have to hand over your intellectual assets — brands, logos, domain names, and the like — to the community too.

The locals aren’t sold. “I think that the concept is great,” a restaurant owner told one reporter; then, with classic Vermont-style opprobrium: “I just think this maybe isn’t the right place to do it.” Others called it “terrible,” “absurd,” and “just plain wrong”; some took to Facebook to protest, gaining hundreds of followers in a day. But at least one landowner acknowledged that Hall might be onto something: “I don’t know what’s going to happen,” she said. “I think he’s got a dream and he’s ahead of his time.”

Hall seems to know his is an uphill battle. By way of proactive olive-branching, he has floated plans to restore local historic buildings and fund a research center near Vermont Law School, which runs the nation’s leading environmental law program from South Royalton. (The school, for its part, says Hall has not been in touch and it has no current plans to work with him.) Hall also says he will work with local and state environmental officials to make the NewVista project succeed, and is planning to spend time in Vermont this summer meeting with residents.

At the end of the day, time could be the key factor: Hall estimates it could take as long as 50 years to fully realize his vision. Meanwhile, Vermonters point to the state’s stringent Act 250 law — which protects this notoriously green landscape by regulating developments larger than 10 acres — as the best way to counter meager local zoning protections and slow Hall’s roll (or the roll of his descendants and colleagues, as the decades pass). But his deep pockets and deep faith suggest Hall won’t give up easily. He is “driven,” according to the LinkedIn review of a drill-site manager who’s done business with him: “Perfection may be considered his lowest standard when developing a concept to reality.” And he is motivated by a 183-year-old plan for a perfect community.

The Illinois town where Joseph Smith had settled before his life ended at the hands of an angry mob, by the way, had a Smith-coined name not entirely dissimilar from NewVista and Novatek: Nauvoo. It’s a Hebrew word taken from a phrase that figures in both the Bible and the Book of Mormon: “How beautiful upon the mountains.”

Editor’s note: The author’s parents live in the Upper Valley and have connections to Vermont Law School. They did not tip her off to this story, although they do encourage her to read the Valley News from time to time.