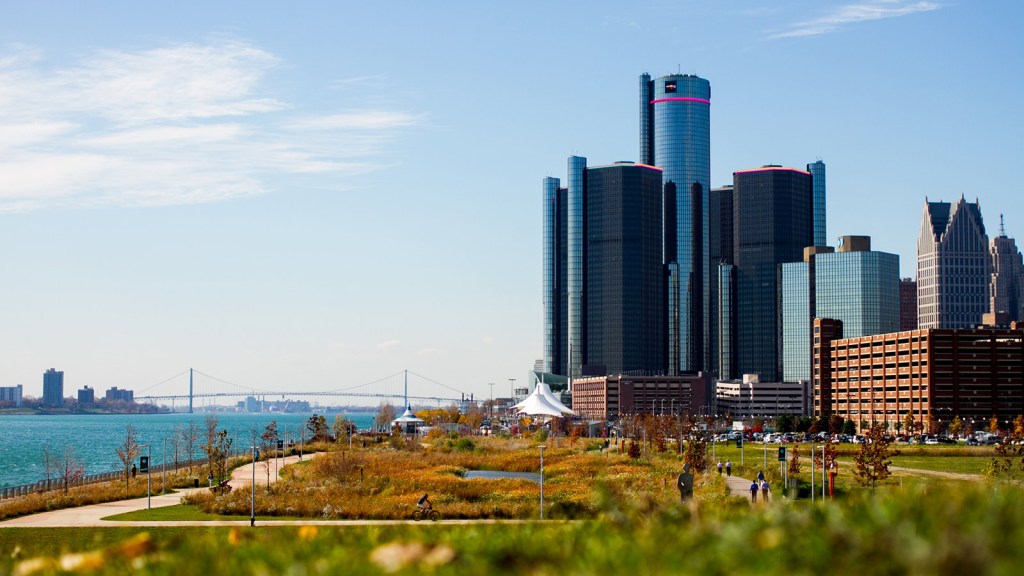 You could be forgiven for thinking Detroit’s current situation couldn’t get much more grim: poverty, unemployment, abandonment and vacancy, civic bankruptcy, rampant crime and tax evasion, an inability to deliver basic services. What other plagues could possibly hit the city?

Well, brace yourself, because things will be getting much worse. Climate change will mean more extreme weather for Detroit: more powerful storms, more heat waves, more extreme cold and heavy snow. In fact, it has already begun, with unusually severe winter weather the past two years and flooding last summer caused by massive downpours.

Cities throughout the U.S. will suffer from more extreme weather due to climate change, of course, but the impact will be particularly severe in Detroit because it has a population with greater needs and a local government with fewer resources to meet them. “Poverty amplifies everything,” says Guy Williams, CEO of Detroiters Working for Environmental Justice (DWEJ).

Take heat waves. Detroit has many poor, elderly people in old, decaying houses. As the houses have aged, they’ve developed cracks and leaks that make them even worse at regulating temperatures. Low-income homeowners often don’t have air conditioners, so when a heat wave of several days above 90 degrees strikes, they’re going to be miserable, and their lives might even be endangered.

Like other low-income inner-city residents, Detroiters have elevated rates of asthma. “Roughly 13.7% of all Detroiters suffer from asthma,” the Sierra Club noted in a report in 2013. “The Michigan Department of Community Health has found that Detroit adults suffer from asthma 50% more than the state of Michigan as a whole.” With higher temperatures, there will be more production of ground-level ozone, which causes asthma rates to increase further and triggers more asthma attacks for those who already have the disease.

Even those without asthma will suffer from the heat. Average temperatures in the Great Lakes region are expected to be 3.6 to 11.2 degrees F higher by the year 2100, the Sierra Club reports, which will lead to a “considerable increase” in what public health experts call Excessive Heat Event (EHE) days:

Detroit is projected to experience 4,109 additional EHE mortalities by mid-century and 17,877 by the end of the century. EHE days can provoke or exacerbate life threatening illnesses, such as kidney diseases, cardiovascular disease, heat exhaustion and heat stroke. …

The populations most vulnerable to heat waves are the elderly, the infirm, young children, the poor, as well those comprising minority ethnic and racial demographics. Residents of city centers are more vulnerable to the effects of heat because paved surfaces and infrastructure magnify the heat’s intensity (the urban heat island effect). As Detroit is an urban center lacking tree cover, it is particularly vulnerable to this type of excessive heat buildup.

Detroit has suffered such massive abandonment that two-thirds of its peak population is gone. The remaining population isn’t evenly distributed; the more affluent neighborhoods are still fully inhabited, while the poorest may have entire blocks with only one occupied house remaining. Many of the poor people in these mostly empty areas do not have cars. Nearly 30 percent of Detroit households are car-free, largely for economic reasons. The city sets up cooling centers on the hottest days, but can those without air conditioning actually get to them? Walking miles in the heat, or standing outside waiting on unreliable bus service, could be even more dangerous than staying inside.

“The flip side is even more pernicious in the wintertime,” says Williams. “Last year we had record-breaking snow piling up. This year we had record cold. It got passé to see a minus temperature when I got up in the morning.” Heavy snow is a huge challenge for Detroit because it has been left with such an enormous network of streets to plow relative to its small and shrinking tax base. Record cold temperatures, meanwhile, threaten the health and safety of the elderly — especially the poor and car-less — just as heat waves do.

Williams, who has a bespectacled look and understated manner vaguely reminiscent of the comedian Larry Wilmore, drives me around Detroit and points to spots where extreme weather is likely to wreak havoc. On the city’s East Side, he notes that the Fox Creek canal overflowed up into the adjacent houses last summer. Some basements filled with as much as eight feet of water, ruining furnaces that cost thousands of dollars to replace. Some people are still cleaning mold out of their basements. “With climate change, we’re projected to get the floods we had in August three to four times per summer,” says Williams. These costs and hassles worsen the already dubious value proposition of living in Detroit and threaten to push some homeowners out of the city. “We’ve lost a few numbers, people who felt they couldn’t rebuild,” says Joshua Elling, executive director of Jefferson East Inc., an economic development corporation on Detroit’s East Side.

Going down the freeway toward Downtown, Williams points to a dip in the road: “There were puddles several feet high here,” he says. Flooding a highway in the middle of town brings traffic, and thus commerce, to a halt. In the case of last summer, the disruption lasted for days.

Detroit, despite all its vacant property, suffers from a dearth of pervious surfaces, so a heavy rain backs up quickly. The Detroit area has an unusual water system, in which the street storm drains send water directly into the sewers that also receive household waste water. So what happens when a powerful enough storm hits? The drains get backed up, the streets flood, and home basements fill with sewage.

Eddy Lester is the president of Creekside Community Development Corporation, which works in the Jefferson-Chalmers neighborhood of Detroit, where Lester has lived since the 1940s. “Now the harder rains are more frequent,” he says. In August he got two feet of water in his basement. “We had to tear up the hardwood floor and carpeting, because it was a finished basement,” says Lester. “If you tried to drive some of the streets, your car would flood out, so you had to stay home.”

But Detroit doesn’t have to just suck it up and take all the coming abuse. There is a lot the city can and should be doing to reduce the effects of extreme weather. In 2011, the DWEJ convened business, philanthropic, and environmental organizations into the Detroit Climate Action Collaborative (DCAC). They have a set of working groups focused on issues from parks to energy. Through meetings with community members, they are trying to develop a climate action plan for adapting to the effects of global warming and reducing the city’s greenhouse gas emissions. Although their final recommendations have not yet been released, there are some elements that will clearly be included, such as:

Efforts in many of these areas have already started, in both the private and public sectors. Hantz Farms, for example, is a tree farm business started on a collection of previously empty lots and abandoned houses bought from the city of Detroit in 2012 by John Hantz, a local financial services mogul. His employees tore down the abandoned houses, cleared the brush, and started planting trees in neat rows. Those trees will ultimately be sold to nurseries, but they will better serve Detroit’s environment than decaying houses with exposed wiring. The Detroit Water and Sewerage Department has instituted stormwater fees on businesses based on the amount of impervious surface on their land, in the hopes that it will spur them to expand greenspace. Now some parking lot owners are looking to put grass and trees on part of their grounds to reduce the fees they have to pay.

When it comes to preparing for and adapting to climate change, vacant properties could actually be an asset for Detroit. But in many other ways, the city’s abandonment and poverty will make climate disruption harder to deal with. That’s why one of the best ways to protect Detroit from climate change would be to bring back up its population and economic might. But that’s a whole other challenge.