We need old buildings to make great cities, but we need new ones too 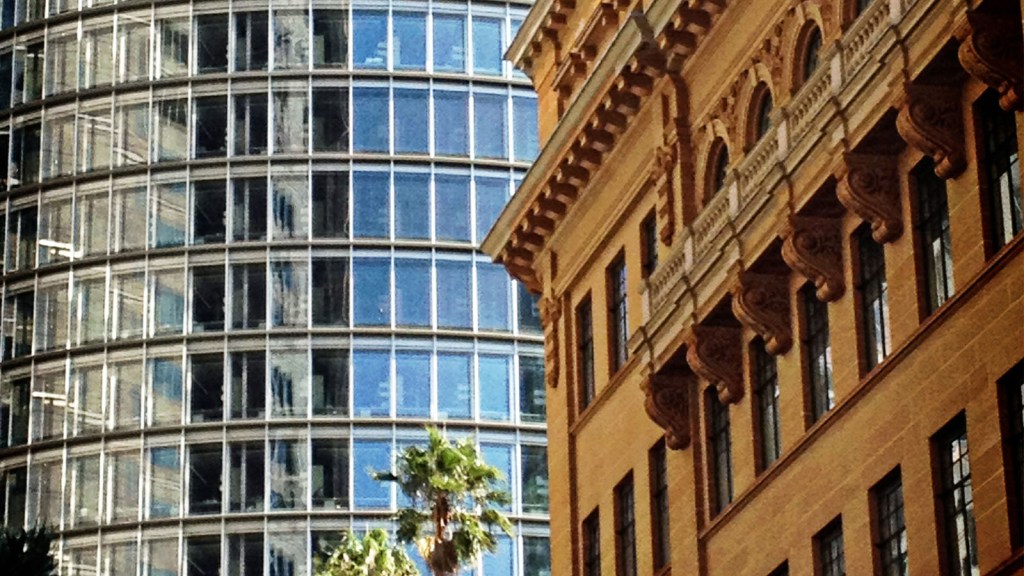 We need old buildings to make great cities, but we need new ones too

In January I was delighted to come across a post on the National Trust for Historic Preservation’s blog containing the following sentence: “Prominent urban thought-leaders such as Edward Glaeser, Ben Adler, and Matt Yglesias have argued that cities need towers and skyscrapers if they are to remain (or aspire to be) innovative, affordable, and sustainable.” Me, a “prominent urban thought leader”? I promptly emailed my parents.

Unfortunately, I was being put in that category as a way of setting me up as a proponent of a supposedly wrong-headed trend toward pro-density thinking among urbanists. The post ended with this toss of the gauntlet: “This spring, the National Trust’s Preservation Green Lab will release a report that builds upon extensive city mapping and analysis to demonstrate the important role that older, smaller buildings and mixed-vintage commercial corridors play in fostering vibrant communities. We will show, with data, just how right Jane Jacobs was: Older, smaller buildings and diverse urban fabric play a critical role in supporting robust local economies, distinctive local businesses, and unforgettable places where people connect and unwind.” [emphasis in original]

The report, released on Thursday, seeks to empirically demonstrate that human-scaled buildings create a better urban experience than skyscrapers. For example, the National Trust writes, “Nightlife is most alive on streets with a diverse range of building ages.” The report uses a rather odd metric to bolster its point: “San Francisco and Washington, D.C., city blocks composed of mixed-vintage buildings host greater cellphone activity on Friday nights.” Even so, the group is obviously right. One need only walk around D.C.’s low-scale, historic Georgetown neighborhood at night, followed by its sterile neighbors, Foggy Bottom and Arlington, which are full of taller, more modern buildings, to see that this is true. It seems as if virtually every city’s biggest nightlife district is in a historic quarter. It’s also true, as the report points out, that older buildings tend to house more independent businesses and fewer chain stores than new buildings.

Perhaps most compelling is the argument that historic buildings attract the creative class, which is essential to any dynamic urban future: “The creative economy thrives in older, mixed-use neighborhoods. In Seattle and Washington, D.C., older, smaller buildings house significantly greater concentrations of creative jobs per square foot of commercial space. Media production businesses, software publishers, and performing arts companies can be found in areas that have smaller-scaled historic fabric.”

These are hardly new ideas. Everyone has known for decades that artists are drawn to old industrial lofts with character rather than modern office towers.

And the fact that super-tall buildings are not ideal for walkable urbanism is old news too. The writer who most inspired my interest in urbanism, James Howard Kunstler, explained in his 1998 book Home From Nowhere that buildings should be at least as tall as the width of the street, preferably a little taller. That’s typically the ratio you see in neighborhoods that predate suburban sprawl: three to six stories on narrow side streets, and six to 12 on wider avenues. If the buildings are too tall on either side, you can feel like an ant in a canyon. If they are too short — as they almost always are in suburbs and Sunbelt cities — you feel like an ant on a football field. But there are other urban design elements that matter. Plenty of lively streets, like Manhattan’s Fifth Avenue, are lined with much taller buildings. New York’s dead streets, like Sixth Avenue in Midtown, suffer from buildings that don’t engage the street: They’re set too far back and often lack retail.

Bear in mind that the National Trust for Historic Preservation is not a disinterested research organization looking to find the path to vibrant urbanism. It has a preexisting agenda of, well, historic preservation, and it’s looking for evidence to support it. In some cases, that evidence is a little misleading. Consider this statement: “Young people love old buildings.” And the evidence for it: “In Seattle, San Francisco, and Washington, D.C., the median age of residents in areas with a mix of small, old and new buildings is lower than in areas with larger, predominantly new buildings.” Does the median age of residents by building type prove that “young people love old buildings”? Not necessarily, as it depends on the reason. If young people avoid new buildings because they are expensive, that would just prove new buildings are desirable. If new buildings attract the elderly because old buildings are inaccessible to people with disabilities, that just proves we need more new ones to serve our aging population.

It’s all about balance. A city with nothing but modern skyscrapers would surely lose its aesthetic charm, its creative energy, and its urban vitality. But a city with no new construction risks turning into a museum: a beautiful but stuffy repository of artwork by dead people, frequented only by the rich and tourists. Take another look at Georgetown to see what I mean. It’s commercially vibrant because it has the old fancy restaurants, not the new interesting ones. No one remotely cool lives in Georgetown anymore. It’s too expensive, and consequently too overrun with preppies and Republicans.

There are D.C. neighborhoods with more new buildings than Georgetown that are a lot more diverse and creatively energetic. It’s certainly true that row houses with stoops draw people onto the street, while skyscrapers with their own gyms, eateries, and underground parking lots can suck life away from it. But filling in empty lots — or replacing the occasional architecturally undistinguished low-rise building — with taller new apartment buildings and ground-floor retail does not necessarily do any harm. D.C. has done just that in gentrifying Logan Circle, Columbia Heights, and U Street in recent years, and their pedestrian and commercial vitality has simultaneously grown by leaps and bounds.

It was odd to find myself characterized as an opponent of my heroine Jane Jacobs, and her affection for “older, smaller buildings and diverse urban fabric.” I grew up in a brownstone in a landmarked Brooklyn neighborhood. I love history, and buildings and neighborhoods that have it. I value diverse urban neighborhoods, and I share the National Trust’s fondness for former streetcar neighborhoods like my beloved Mount Pleasant in D.C., where I lived for four years. I spent my whole life in a number of century-old row houses before moving into my current condo building in Brooklyn — a modest seven-story structure that I chose because its brick exterior fits into its Victorian brownstone surroundings. I despise the towers-in-a-park Modernism that the National Trust sets up as the contrast to all of this.

So why are we somewhat at odds? Because I’m not an investment banker. I find Georgetown, San Francisco’s Telegraph Hill, and New York’s West Village aesthetically charming. Unfortunately, their real estate is astronomical. The high prices and their inevitable result — which is that the neighborhoods become richer, older, less diverse, and more conservative over time — is the price we pay for preserving their architecture. At least us writers and other regular folks exiled far away can walk around those neighborhoods and marvel at their beauty. But if we are to maintain the affordability that nurtures creativity and diversity in a city like D.C., San Francisco, Seattle, or New York, we need more supply of housing and office space to meet demand.

Tall buildings aren’t just luxury condos. They are middle-income co-ops and Section 8 low-income housing. They are also office buildings. When the cool new media companies incubated in little old buildings succeed and grow, they need big enough spaces to house all their employees. In other words, they need skyscrapers. Would New York be better off if the Hearst Corporation had decamped for some massive suburban office park rather than building the magnificent Hearst Tower? Would the environment be better off?

To the extent that supply can be added by making use of the existing urban fabric, rather than new construction, that’s good for all the reasons the National Trust cites, plus the environmental benefits of not wasting resources. The group is wise to suggest that “[c]ities can help unlock the potential of [vacant properties] by removing barriers, such as outdated zoning codes and parking requirements, and streamlining permitting and approval processes.” I have two more suggestions: remove barriers to subdividing small buildings into more apartments, like micro-apartments and single-room occupancy dwellings, and get rid of the favoritism in the federal tax code for buying new homes instead of renovating old ones.

But it’s wrong to deny that majestic skyscrapers are part of our architectural heritage, helping to make our cities vital, beautiful places. New ones, when done well, can be an exhilarating addition to their surroundings. Ironically, in the National Trust blog post that I mention above, the group tries to showcase the benefits of low-rise housing with a photograph of the Manhattan skyline from a Brooklyn roof. Having spent most of my life enjoying that very view, I’m well aware of its enormous value. But it’s a view of skyscrapers! Yes, you need development restrictions in Brooklyn to achieve it, but you also need some skyscrapers in Manhattan to look at.

And the relationship between development restrictions and historic preservation is not always so straightforward. In a piece I wrote for Grist calling for lifting D.C.’s height limit, I referenced a study showing that the city’s Height Act actually causes more destruction of existing buildings. Imagine your city needs X square feet of new built space. Without a height limit, you can achieve it by building a bunch of 40-story buildings downtown while leaving the outlying low-rise neighborhoods alone. Now imagine that you impose a 12-story height limit downtown, as D.C. has. That leads developers to tear down three-story row houses a few miles away to build six-story apartment buildings. And they throw up tall monstrosities outside the city limits, like in Arlington, Va., which causes sprawl. It’s not clear which parts of D.C.’s notoriously squat, hideous downtown architecture the National Trust thinks are worth preserving at this cost.

Historic preservation and low-rise zoning are wise in some situations and some areas, but not merely as an abstract principle to apply without discretion. Preservationists should absolutely stand up for that which is worth preserving. The Trust’s new report is entitled “Older, Smaller, Better.” But not all buildings that are old and small are better than ones that are new and big. A healthy city needs a healthy mix — as the Trust’s report actually acknowledges, even if its title doesn’t. And, critically, a healthy city needs freedom to grow.