Will San Francisco's water snobs drink from the gutter? 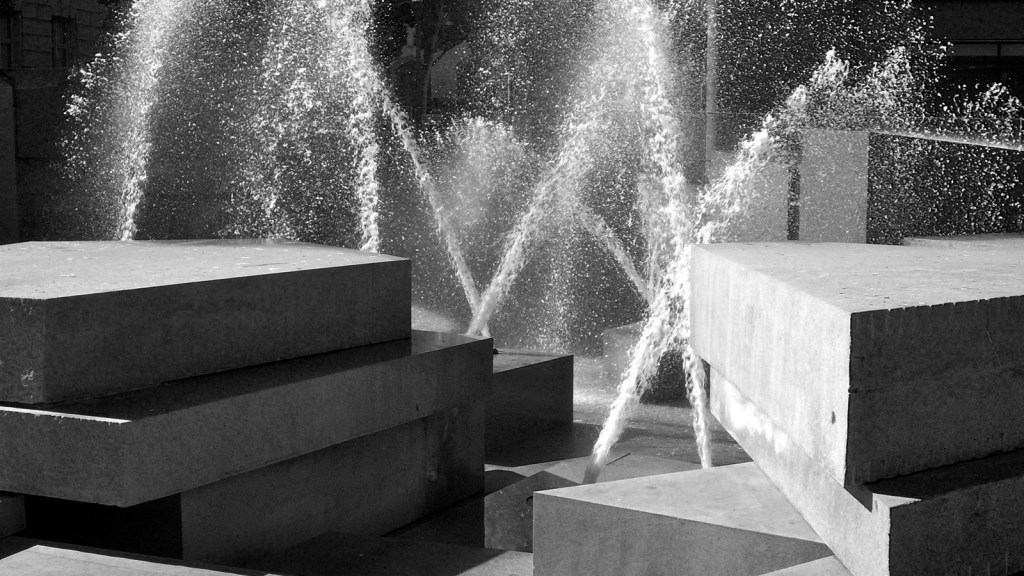 Loren Javier
Water flowing underground, same as it ever was

Will San Francisco’s water snobs drink from the gutter?

All kinds of people leave their hearts in San Francisco, but none of them leave it anywhere near the vicinity of U.N. Plaza Fountain — unless they’ve been murdered. When the landmark was built in 1975, to commemorate the 30th anniversary of the creation of the United Nations, it featured cutting-edge computerized technology that simulated the rise and fall of the tides around majestic stone rectangles that were meant to represent the continents.

Then the tides seeped into the computer and wrecked it — leaving the fountain to live out the next few decades as a brutalist kiddie pool covered in birdshit, with what looks like a couple of broken fire hydrants shooting water at the center. It’s the kind of landmark that most people try not to look at too closely as they walk past on their way to the farmers market.

But the fountain has a secret coolness to it: It’s one of the only places in San Francisco where you can actually see what’s left of the creeks and springs the city buried as it grew. The crew installing the fountain had stumbled on an underground spring and, rather than tapping a city water main, just hooked the system up to nature.

The only reason I know anything about the fountain is because I’m spending a Sunday afternoon wandering around civic center with Joel Pomerantz, a local historian. San Francisco is full of people who love one aspect of it and study it intensely — finding and interviewing people connected with their subject, passing long hours in different local archives.

Pomerantz is the water guy. He’s spent years looking for evidence of San Francisco’s original topography and hydrology, before we filled in the marshes, paved the streets, and ran the creeks below ground. Today — as San Francisco, like the rest of California, has suffered through a full year of official, declared-by-the governor State of Emergency and wonders where its future water will come from — that knowledge is looking more and more vital.

Different parts of California are dealing with drought in their own special ways. Santa Cruz started a remedial water conservation school for residents who run up huge water bills. When Lady Gaga shot a music video at Hearst Castle, the Hearst Castle Foundation made her donate to a local water supply study and film a water conservation public service announcement in exchange for permission to fill the castle pool. And San Francisco, after years of pulling its water supply from a pristine reservoir in a national park, is actually beginning to pay attention to the water underneath its own streets.

Turn on a faucet in San Francisco, and the water that comes out is from 200 miles away in Yosemite National Park. When the Hetch Hetchy reservoir was built in 1923, John Muir viewed it as a crime against nature. City leaders framed it as a necessity — to break up the monopoly that a private water company held over San Francisco’s water supply, and to stop the city from burning down the way that it did in the 1906 earthquake. It was unprecedented, and it remains one of a kind (while Cascades National Park in Washington supplies water to Seattle, the reservoir predates the park).

The water from Hetch Hetchy comes from snowmelt off the Sierra Nevada, and while no one can be entirely sure how San Francisco is going to be affected by climate change, the assumption is that we’re not heading into a great era to be drinking snow water. San Francisco already uses less water per capita than anywhere else in California — but it’s got a whole lot of capitas.

There’s not enough water for everyone living here — not by a long shot. But since the drought has stretched on, the San Francisco Public Utilities Commission is experimenting with mixing the water under the city with the water flowing in from Hetch Hetchy — both to keep Hetch Hetchy from emptying out, and to provide the city with some backup in case an earthquake destroys the aqueduct connecting the city to Yosemite.

When you’ve been drinking snow water from a national park, and when you’re a city of what could charitably be described as food snobs, drinking groundwater is a hard sell. While there does not appear to have been any overt pushback to the groundwater plan, and the water mixing won’t begin until the next year or two, the San Francisco Public Utility Commission — which lives in a sleek new building not far from U.N. Plaza that looks like a dot-com office and recycles its own toilet water — took the initiative to organize a blind taste test with several food critics: In one cup, the groundwater mix; in another, the traditional, mostly Hetch Hetchy tap water; in another, regular bottled water.

It was, wrote the Chronicle, a “tasting that could have evoked the joie de vivre of a Napa Valley showroom if it weren’t for the stiff office chairs at the water department and the inherent blandness of the fare.” When the testing results came in, the PUC made note of “the wine critic’s preference for the groundwater blend.”

Right now, the groundwater that is being collected will be taken from wells dug along the city’s more residential, less industrial western side. The water is rain, mostly, that has filtered down through the dunes that once occupied nearly half of today’s city. Which raises another issue: San Francisco would have been able to catch and store a lot more groundwater before it was paved. Once the city is drinking more locally, will there be more of an incentive to take up concrete in certain parts of the city? Will San Franciscans brag that Golden Gate Park was sound hydrological policy, and not just an attempt to have a park as cool as New York’s?

In times of abundance, the water under the city was an inconvenience and eccentricity — something that, during the rainy season, rose to the surface, drowned park grass, and flooded BART tunnels. But we live in the future now — and in the California of the future, there is no water that won’t be wooed and courted.