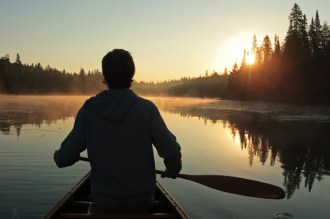 I’m climbing in my douchecanoe to paddle back into the debate over the green-bashing by the Breakthrough crowd.

Last week, Matt Nisbet, an associate professor at American University, released a report called “Climate Shift.” It argued that, contrary to what most people think, pro-climate-bill forces spent more than their opponents, media coverage of climate science has been generally fair, and Al Gore is just as responsible as Republicans for politicizing the subject of climate change. It recommends that greens drop their push for cap-and-trade, stop talking about climate science, and focus instead on innovation and economic competitiveness. If those arguments sound familiar, it’s because they faithfully echo a long-running critique of the environmental movement by a group of people I call, for lack of a better term, the “Breakthrough crowd,” after the folks at the Breakthrough Institute (BTI). I don’t mean anything nefarious or conspiratorial by this — as far as I know, Nisbet has no formal ties to BTI — just that there’s a distinct set of political and policy arguments, and to some extent a distinct style, being put forward by a distinct set of people. So I named ’em.

I’ve been assiduously refraining from any discussion of Nisbet’s report, for reasons I explain below. But I’ve read enough annoying stuff about it now that I feel I have to weigh in. Naturally I’ll need two posts to do it.

First I want to address the reason I’ve been avoiding it and, more broadly, what I see as a fairly dysfunctional social dynamic that’s developed around the Breakthrough crowd and the journalists who cover it. The second post will be about the substantive issues Nisbet et al raise, and will likely include fewer instances of the word “douchecanoe.”

So, why have I been avoiding this? To really tell that story, we need to travel back to 2005, when Michael Shellenberger and Ted Nordhaus published “The Death of Environmentalism” and Grist hosted a big discussion of it. That paper contained a combustible mix that was to become familiar in subsequent years: If you cared to pick them out, there were good ideas about the need for technology innovation in clean energy. Those ideas were surrounded by a grand and elaborate exercise in myth-making that cast green groups as the fount of all error, a fusty and hidebound Establishment forever attempting to diminish and suppress the forces of the New Paradigm, led by, of course, S&N themselves.

Predictably, the attacks aimed at green groups drew outrage from their targets. Just as predictably, the outrage was used as evidence that S&N are brave truth-tellers, renegades, the “bad boys of environmentalism.” I don’t know if S&N planned it that way, but the strategy turned out to be pure media gold.

If S&N had come forward with nothing but a positive agenda for the future of clean energy, they likely would have been politely ignored by the mainstream media just like dozens of earnest green agenda-bearers before them. (Grist’s bookshelves sag under their weight.) But S&N capitalized on an insight that had been ignored by their forebears: nothing, but nothing, draws media interest like liberals bashing liberals. They enjoy conservatives punching hippies. They dig centrists punching hippies. But they looove ex-hippies punching hippies. A pair of greenies bravely exposing the corruption and dumbassery of all the other greenies? Crack rock.

It’s important to note that it’s not just Beltway reporters who love this stuff, though they love it the mostest. Ever since the perceived successes of Bill Clinton’s triangulation and the ascendency of the New Dems, the road to acceptance on the left has been paved with hippie punching. To be legit, one must signal to one’s peers that one is not like those liberals, the old-fashioned, soft-headed, bleeding-hearted, slogan-shouting kind. One is a Pragmatist, not a Partisan, a traveler on the Third Way, not on the old, boring Left Way, a hard-headed, practical sort, not some kind of dippy dreamer. This pose is incredibly attractive to people whom I’ve called (clumsily, I grant you) “characterological centrists” — folks who want to be, and be seen as, free-thinking and reasonable. What better way to demonstrate one’s transcendence of mere partisanship than by rejecting the partisans with which one is most naturally associated?

The hippie-punching angle guaranteed a prominent spot in even-the-liberal New Republic, worshipful coverage in Salon and Time, valorization by any number of conservative blogs and think tanks, and the eventual involvement of Roger Pielke Jr. S&N went on to found the Breakthrough Institute and have accrued around it an orbit of allies and like-thinkers who have proven eerily adept at replicating S&N’s original mix.

The difficult thing is, they all face the same perverse incentive structure. The wonky stuff — and BTI cranks out some genuinely good wonkery — doesn’t get clicks. What gets attention (and thus keeps the appearance of influence alive) are the attacks on hippies doing it wrong. These incentives have led the Breakthrough crowd to meditate endlessly on the failings and failures of others pursuing similar goals by different means. In S&N’s increasingly baroque telling, the green groups and their partisan blogger defenders are omni-incompetent: spending money wrong, pursuing the wrong policies, dealing with the wrong people, framing wrong, arguing wrong, responding to their critics wrong, and almost single-handedly insuring that there is no progress on climate change.

The effect has not been the dawning of a new day of post-partisan support for clean energy. Turns out demonstrating one’s moderate bona fides by punching hippies doesn’t actually bring any conservatives over. They’re as partisan about clean energy as they are about climate. Mostly, the result has been lots and lots of press attention on hippie errors, a subject upon which everyone with a keyboard is apparently an expert.

The ineffable but unmistakable property of a Breakthrough-esque foray into politics is that it makes douchecanoes of everyone it touches, like some sort of inverse King Midas. Its authors, the journalists who cover it, its critics — no one comes out looking good. I’ve paddled that douchecanoe myself, many times, and every time ended up feeling vaguely dirty. I can’t put my finger on the precise mechanics, but I’ve learned to recognize it.

So I decided, with a few lapses here and there, to stop responding. Life is too short to spend around things that bring out your inner douchecanoe. I’d rather write about ideas I’m excited about. That’s why I was going to let Nisbet’s report slide on by. Once I looked at it, it became apparent it was just the Breakthrough stuff rehashed, attached to some numbers that don’t prove what they’re supposed to prove. (I wish BP spent its whole lobbying budget supporting climate legislation, instead of this kind of stuff.)

Sure enough, the whole thing has played out according to script. First there’s the report, with its contentious numbers, forced interpretations, and wildly broad conclusions. Then the scathing, over-the-top critique of those numbers from Climate Progress blogger Joe Romm. Then a flood of people using Romm as a stand-in for The Greens, saying, “Ooh, look how defensive the hippies are being, why can’t they accept a little constructive criticism?!” Once again, everyone loves the story of bold new ideas being shut down by the green establishment.

But … what bold new ideas? The idea is that the green establishment is a bunch of losers attached to a failed strategy, which may be many things, but it’s not new.

For some reason, what tipped me over into responding, boarding my douchecanoe for one more ride, is this post from Time‘s Bryan Walsh, normally one of the sharpest, most judicious journalists in the green world. To my dismay, he buys the idea that a couple of blog posts from Joe Romm constitute a “full-court press” attack meant to “kneecap” Nisbet himself. But Romm’s attack is on the report’s numbers, not on Nisbet.

Walsh acknowledges that it’s kind of crazy to count BP’s entire lobbying budget as money spent on cap-and-trade — it may be that “calculating lobbying money is difficult,” but it’s not difficult to see why that’s wrong! — but then does a version of, “numbers aside, there are criticisms here environmentalists should pay attention to.”

Yes, as Walsh notes, there are criticisms of green group strategy that don’t rely on the numbers. But those are the same criticisms of green group strategy that have been hashed over dozens and dozens of times now by people inside and outside the Breakthrough orbit. Walsh might agree with some of them — I do — but Nisbet’s report does not add anything new to them. It’s just another clever repackaging, drawing media attention all over again.

The most puzzling part of Walsh’s post, though, is his umbrage that Joe Romm is trying deliberately to “kill a false narrative.” Walsh says, “as a journalist I’m not a huge fan of being told what I should and shouldn’t think.”

But, but [splutter] … what is Nisbet’s report if not a carefully constructed and packaged narrative designed to tell Walsh and others what they should think? In fact, the entire Breakthrough assault on environmental groups, begun in 2005, has been one of the most adept and skillful constructions of a media narrative I’ve ever witnessed. They and their acolytes are brilliant at manipulating the professional mores and self-images of journalists. By contrast, love him or hate him (and I’m a lover), Joe Romm is not exactly a slick media spin artist. He doesn’t seem to know any way of communicating other than by stating, in the strongest possible terms, what he believes to be correct. He doesn’t couch his criticism in the sort of soothing, this-side, that-side, we’re-all-reasonable-people throat clearing that attracts the admiration of Serious People. He just blasts away, all guns blazing; he can’t help it. Whatever you call that, it’s hardly a devious strategy to control Bryan Walsh’s mind. It’s pretty above board! The guy who really wants to manipulate your narratives, the guy who’s good at it, doesn’t tell you he’s doing it. After all, here’s Walsh scolding greens for not meditating on the conclusions of a report based on numbers he admits are dubious. Looks like someone succeeded in capturing the narrative, and it wasn’t Romm.

Aaaanyway, that’s probably enough about that. I deeply hope this will be my last word on the sociocultural aspects of all this. Suffice to say, if I were consigliere to a group of people hoping to institute a bold, forward-thinking energy agenda, I’d advise them to spend the bulk of their time advocating for that agenda. I’m not sure what is being accomplished by these serial attempts to prove, with faux-mathematical precision and Oedipal obsessiveness, just how how bad the hippies in charge have screwed everything up.

Tomorrow Next week: some substance!