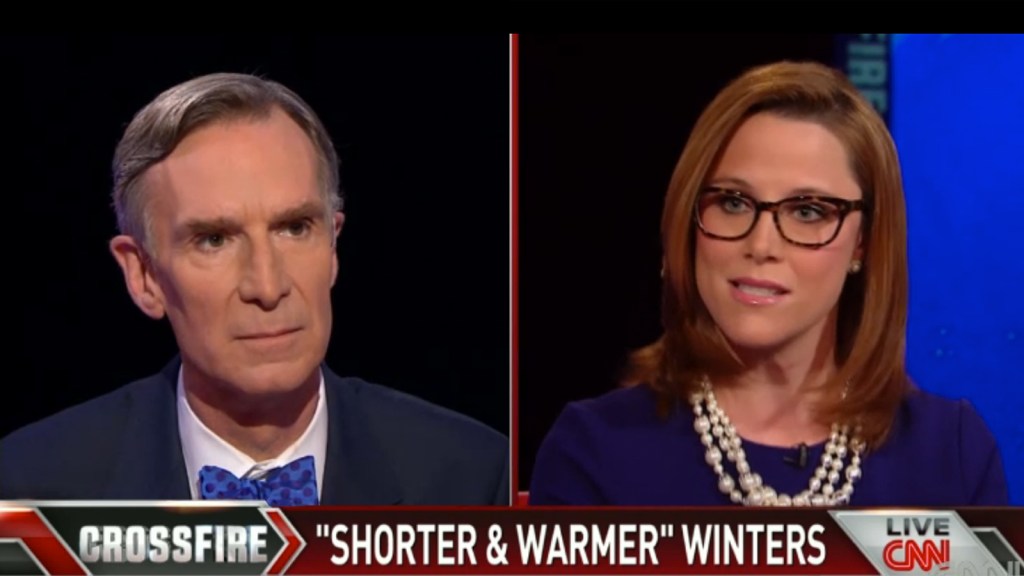 Thanks to the Obama administration’s high-profile rollout of the National Climate Assessment, climate change was, for a day yesterday, the nation’s leading story. Different media outlets approached it in different ways, but when it came to CNN’s Crossfire … well, not surprisingly, the show opted for a debate about the science.

The result was a lot of sound and fury, but at least the debater on the side of reality — Bill Nye the Science Guy — gave as good as he got. Nye was up against not only conservative host S.E. Cupp, who said the White House was engaging in global warming “scare tactics” and accused “science guys” of attempting to “bully other people,” but also Nick Loris of the Heritage Foundation. Loris acknowledged that humans are responsible for “some part” of the changing climate and claimed that “I’m not a denier, I’m not a skeptic,” but he also asserted that “we’ve had Arctic ice, globally, increasing” (not!) and that “we’ve had this 16-to-17-year hiatus in warming.” (Actually, the notion that global warming is “slowing down” is very misleading.)

“Let’s just start with, we don’t agree on the facts,” Nye said to Loris and Cupp. “This third report [the National Climate Assessment] came out, saying it’s very serious. You say, ‘No.’ Right? There’s the essence of the problem.”

At another stage of the debate, Nye delivered the coup de grace: He asked both Cupp and Loris what would change their minds about the threat posed by climate change. Loris’ answer, amazingly, was better science — which was just delivered in the form of the National Climate Assessment. Watch it:

You have to slog through seas of misinformation to defend science these days. But deniers be warned: When you go up against an entertainer like Nye, you may not only be refuted … but it might also be pretty memorable.