Chemical plants endanger 134 million Americans. Who gets the worst of it? 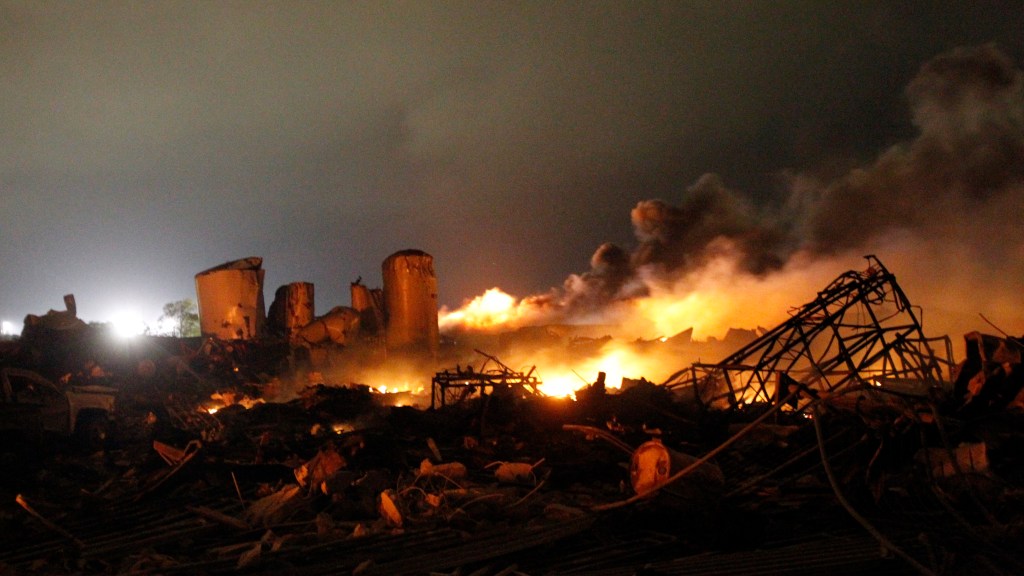 The aftermath of the April 18 explosion and fire in West, Texas. Reuters / Mike Stone
Climate & Energy

Chemical plants endanger 134 million Americans. Who gets the worst of it?

Remember the fertilizer plant explosion in West, Texas, last August, that claimed the lives of 15 people and injured another 160? We tend to think of such accidents as isolated incidents that won’t happen near us. But there are over 134 million Americans who can’t afford to think that way, according to a new report from the Environmental Justice and Health Alliance for Chemical Policy Reform that maps out where the facilities handling the most dangerous chemicals are, and who lives near them.

That 134 million is the number of people who live in close proximity to roughly 3,400 facilities that manage dangerous chemicals like those found in the Texas blast, according to the report, called “Who’s in Danger?” A subset of those who live within a stone’s throw of those facilities – “fenceline communities” – are composed of people with the least protections when disasters happen. From the report:

“People of color communities are treated as if they are disposable human beings,” said Michele Roberts, the Environmental Justice Health Alliance‘s national co-coordinator. “Our government has allowed these facilities to be disproportionately located in communities of color and has allowed chemical corporations and the officials who are supposed to be protecting us to tragically fail workers and surrounding communities.”

Climate change threatens to exacerbate these situations by producing more frequent and intense storms. Hurricane Katrina already gave us a taste of what happens when furious storms meet volatile chemicals.

“With Katrina came a lot of storm surge, and it moved chemical pollutants into almost all of the communities,” said Wilma Subra, a Louisiana-based chemist and longtime environmental justice advocate. “Six million containers of hazardous materials were spread all around Louisiana from Katrina’s storm surge, and they contaminated not only fenceline communities but whole areas, including the coastal areas.”

Given all that, you might expect environmental justice advocates to want to close these dangerous facilities. But for the most part, they’re not. The message of “Who’s in Danger?” is not Shut ‘em down, it’s Could you just use some chemicals that won’t kill us?

By and large, it  wouldn’t even cost the industries much. The 2006 report, “Preventing Toxic Terrorism: How Some Chemical Facilities Are Removing Danger to American Communities,” details how, when some companies converted their chemical supplies to safer alternatives, it cost them relatively little – at most $1 million in an industry that reports billions in profits annually.

But since Congress and state governments don’t require companies to even explore safer alternatives, much less use them, the risks persist. The industry now feels entitled to use certain risky materials, even when less-risky versions are available. We saw this during the BP oil disaster in the Gulf of Mexico, where millions of gallons of Corexit dispersant were used to break down oil even though we didn’t know all of the chemical ingredients of it (for proprietary reasons); and of the ingredients we did know, some were banned in Europe due to toxicity. Alternative dispersants were available, and the EPA ordered BP to find and use them. But BP waved the agency off. The EPA had no real enforcement card to play in the matter.

According to the new report, “federal programs almost universally fail to require facilities that store or use highly hazardous chemicals and endanger millions of people (who are disproportionately black, Latino, and poor) to determine whether safer alternatives could be used instead.”

Such racial impacts are neither parenthetical nor accidental, but the result of policies that have forced African Americans, Latino Americans, and people who live in poverty to subsist in the most undesirable places. Government forces use policies to protect whiteness and wealth instead of protecting and serving all Americans.

Businesses and law enforcement agencies know how to take precautionary measures when it comes to protecting themselves. Consider that for jobs, most employers – even those that are the subject of this report — require a background check. They want to know if a person has committed crimes, and felonies in particular. In too many instances today, employers also require a credit check.

According to the Small Business Administration, background checks are necessary because:

“[It]not only save[s] you money in the long run, it can also protect your business. How? If your employees come into direct contact with your customers (for example, in a care capacity) and cause harm to a customer, your business can be liable if that employee has a criminal record. A background check can also provide insight into an individual’s behavior, character, and integrity.”

And then there are “stop-and-frisk” policies that allow police to randomly approach, search, and arrest people, just in case they might be carrying guns and drugs. Police call this a precautionary measure to protect the public, even though few of these searches turn up any criminal activity. Worst, the grand bulk of the frisked are black and Latino men.

But the public can’t perform similar background checks on materials used by chemical companies. We can’t stop-and-frisk chemical processing plants to ensure they aren’t carrying materials that are hazardous to communities. In many cases, as with Corexit, we don’t know what’s in these materials to begin with. EPA’s Integrated Risk Information System, or IRIS, database was created to help the public identify the human health risks associated with these chemicals. It’s not yet ready for full implementation, though, and companies still need to divulge all the chemicals they’re managing to begin with in order for people to look them up in the IRIS database.

As Michele Roberts broke it down to me, “Instead of taking a precautionary approach, we take a reactionary approach. We say we are responding to terrorism by protecting the homeland, but in the meantime we take communities that are on the fenceline of those facilities and subject them to terror every day of the week because we don’t know when the next plant might explode.”