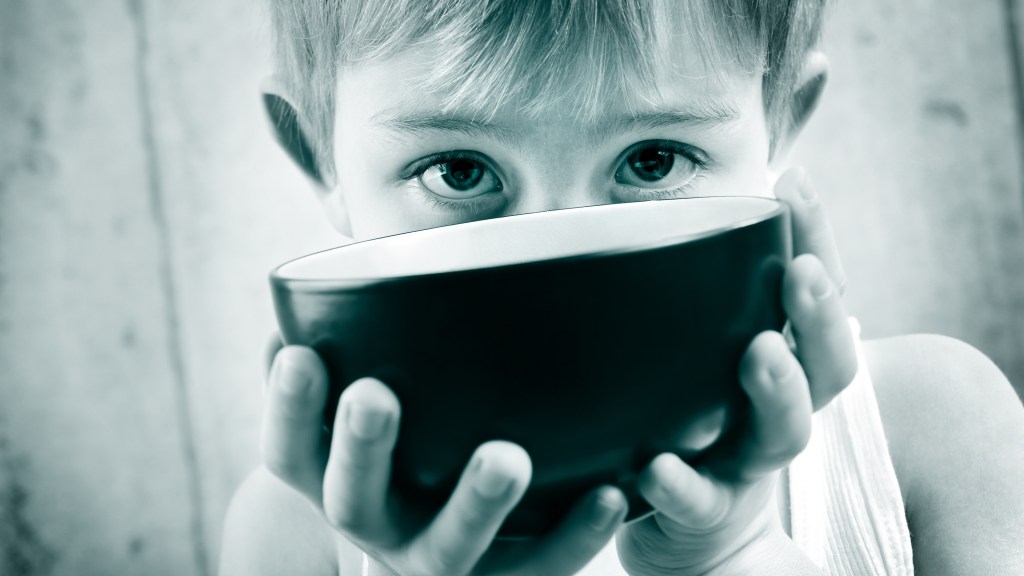 Talk of climate change-induced disasters probably brings to mind Pacific islands disappearing into the ocean, powerful storm surges, overwhelming floods, and raging wildfires. But some of the impacts — stemming in part from some of these same phenomena — will be more prosaic, but just as deadly.

Take food. A report released Monday evening by Oxfam America, an anti-poverty organization, finds that, “food prices could double by 2030, with half of this rise driven by climate change.” The result? “There could be 25 million more malnourished children under the age of 5 in 2050, compared with a world without climate change.”

We’re not talking about kids in the backseat whining that they want their chicken McNuggets posthaste. This is about already impoverished families in the world’s poorest countries that will be pushed to starvation by rising prices for their dietary staples.

Growing food is highly dependent on a delicate balance of natural conditions. Even slight shifts in average temperature or precipitation can make a now-plentiful crop unable to survive. Warmer or wetter weather can unleash crop-eating plagues such as locusts. And floods or fires can, of course, wipe out a season’s yield entirely.

Lower supplies of food means higher prices. And for the more than 3 billion people living on less than $2.50 per day, even small increases in food prices can be a matter of life and death.

Extreme floods in Pakistan in 2010 destroyed an estimated two million hectares of crops, killed 40 percent of the livestock in affected areas, and delayed the planting of winter crops, causing the price of basic foods such as rice and wheat to rocket. As a consequence, an estimated eight million people reported eating less food and less nutritious food over an extended period of time…

Already this year there have been a number of record-breaking weather events around the globe which have badly affected agriculture and the availability and affordability of food.

Other examples abound. Typhoon Haiyan decimated the Philippines’ fishing and farming industries. “In Brazil, the worst drought in a decade has ruined crops in the country’s breadbasket region,” Oxfam notes — “including the valuable coffee harvest, causing the price of coffee to shoot up by 50 percent.” (And you thought the $4 latte at your neighborhood coffee bar was already expensive.)

But it is not just extreme weather events that are causing problems. Even minor changes in rainfall or temperature can render land infertile. “Millions of poor people across Central America are facing hunger and destitution as a result of shifting patterns of rainfall and rising temperatures,” notes Oxfam. “In Guatemala, the total amount of rainfall is increasing, but there is significantly less rain during critical times in the crop cycle, and this is taking a heavy toll on harvests. In the last two years, small-scale producers have lost 80 percent of their maize crops because of drought.”

Oxfam is not the only organization to predict potentially catastrophic food scarcity and rising food prices. A new report in the journal Environmental Research Letters finds that increases in heat extremes at sensitive times for crops could lead to major decreases in yields of staple crops such as spring wheat, maize, and soybeans. The Intergovernmental Panel on Climate Change is going to anticipate likely food price increases in its forthcoming report, according to leaked copies.

Oxfam has a few suggestions for how national governments can prepare themselves to reduce the risk of mass starvation in the inevitable event of some climate disruption. Among the group’s suggestions: Enshrine the right to food in the law, expand safety-net programs like school lunches, and assist small-scale farmers by investing in irrigation and other supports.

But adaptation has its limits, warn the report’s authors. The best thing we can do to minimize the human suffering from global warming is to minimize our greenhouse gas emissions. Otherwise, you’ll have a lot of hungry people, a lot of desperately poor fishermen and farmers, and a lot of cranky people sick of overpaying for coffee.