As a city reporter turned environmental reporter, I’ve covered a lot of protests. I’ve seen it all: the signs made with magic marker. The shouting in unison. The puppets. The person dressed like the Statue of Liberty (alternatively: Uncle Sam). The people who appear to have arrived at this protest with signs from a completely different protest. The ukuleles. The kids with black bandannas over their faces looking for a Starbucks to tag. The four police officers to every one protester.

And so, when I saw the photos of the Cowboy and Indian Alliance in Washington, D.C., last week, the first thought that floated into my mind, unbidden, was this: “Damn. That’s a good-looking protest.” The signs looked like they’d been made by someone with some serious experience in sign making. The people in the photographs looked comfortable, but they had clearly dressed for the occasion.

Back in the civil rights era, protests were carefully designed affairs. They were in a more stylish time, sure, but the church and civil rights groups that organized them also made sure that the people who went to them wore clothes that they might not necessarily wear in their day-to-day life: suits, ties, button-down shirts, dresses, hats. Sunday best, but for a serious Sunday. Participants used the signs that the organizers gave them — they weren’t allowed to make their own. 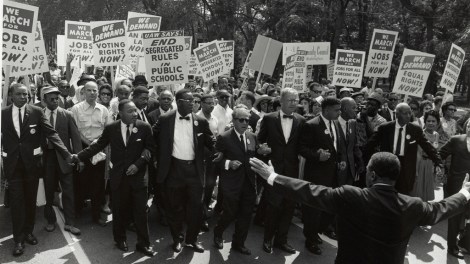 The Vietnam War changed that, and set down a model that has been, more or less, followed ever since, right up to and including the Occupy movement: Put out a call, and hope a lot of people show up. It was an understandable move. In an interview with The Believer, historian Lucy Barber described it this way: “You’re coming out of a period where, if anyone says anything critical, you call them a Communist or something. So they went for this ‘We’re going to include everybody.’”

The Cowboy and Indian Alliance gathering, is in many ways, a throwback to the more careful, deliberate model of civil-rights style organizing. The organization dates back to January of 2013, when a handful of ranchers who had been protesting the Keystone pipeline were invited by Faith Spotted Eagle, another anti-Keystone activist, to an event called “Protect the Sacred” on the Yankton Sioux reservation in South Dakota. The ranchers were invited to join in an 1863 treaty that the Yankton Sioux had made with the Pawnee to band together and support each other against the homesteaders, ranchers, railroads, army, and rival tribes that were threatening their way of life.

“It was kind of spiritual,” says Tom Genung, who was one of the ranchers invited. “The original treaty was with some tribal folks that were opposed to each other — warring. They realized they had to get together and stand together to deal with the United States better than what they were used to. And the reason they were doing that was because they wanted to protect the land for the next seven generations. That was 150 years ago, so in a way we renewed that treaty for the next seven generations.” As a Nebraskan, Genung had spent plenty of time passing through reservations, but he’d never been invited to one. “Not to mean any disrespect, but it was sort of a novelty when I was a kid. I didn’t suffer from no bad prejudice — I don’t know why, I just came that way. But on the cowboy end of things, to be invited, that was exciting.”

It was the next step in a progression that had taken Genung into wider and wider circles, environmentally. “When I found out about the Keystone pipeline I was like Not in My Backyard — take it someplace else. Then the BP oil spill happened, around that same time. And at the TransCanada pipeline meetings I heard exactly the same rhetoric about the spill. It was just hokey pokey stuff. They were saying anything that seems like an answer. Then I had the privilege of learning about some things like climate change, and here I am just sounding like an environmentalist.”

Genung became a board member of the Nebraska Easement Action Team (NEAT) which helps ranchers negotiate with pipeline companies that try to obtain oil leases. “Every time TransCanada comes around, the price has come up,” Genung says cheerfully. “If they try to buy a lease,  just say ‘I’m a member of NEAT and you need to talk to our attorney.’ And if you say you are a NEAT member, you are a NEAT member.” In 2011, he got arrested in Washington with Tar Sands Action (“First time in Washington, D.C. First time protesting at any scale whatsoever. Feeling real patriotic.”)

Genung hesitates to call what happened in D.C. last week a protest. “I like to promote the idea that it was more of a spiritual camp.” Except for a brief wade in the Lincoln Memorial reflecting pool, and a spontaneous circle dance at the intersection of Wisconsin and Embassy, no one risked arrest. Every day featured a different event, like protesting outside of John Kerry’s house, or decorating one of the tipis with everyone’s thumbprint and donating it to the Smithsonian to commemorate the event.

The tipis were set up on the Washington Mall, in the section that allows tent stakes. Much of the day was spent hanging around the tipis and talking to people passing through. “By being on the mall, it’s been much more of a social event than a protest,” says David Turnbull, Campaigns Director of Oil Change International. His role has been supporting basic logistics, like keeping tipis stable in high wind conditions, keeping the generators running, and making sure that no one got heatstroke while marching. “We’re surrounded by the Smithsonian — we have people from Australia and Kansas and all over the world walking by and asking what we’re doing. As a professional campaigner — or whatever I call myself — it’s been amazing to see people who would not have been energized about these issues learn about them.”

It took the collaboration of several experienced organizers to make the Cowboy and Indian Alliance’s visit to D.C. happen. Among them was Bold Nebraska, run by the very media-savvy Jane Kleeb, as well as 350.org and the Sierra Club. “The amount of organization — it’s just unfathomable,” says Genung. “I can’t even imagine what they went through to work with all the groups that needed to be represented. Had to be a lot of diplomacy and a lot of coordination.”

Other than speaking to the press, Genung’s role was to show up for one of the most spectacular photo ops of the event — a horseback ride, on steeds brought in from Virginia. “His name was Roger,” says Genung, of the horse he had to check out and sign two waivers to ride. “And he was a great horse. They all were. They were amazingly well behaved and well trained to tolerate the noise of a big crowd around them.”

Sure, it was theater. But then, that’s what a protest is. No matter what outfits are being worn, it’s an event to dramatize the connections between people that might not be evident otherwise.

“Our work was to be visible,” says Genung. “At the Protect the Sacred gathering, we started counting up the sameness rather than the differences. When it comes to Keystone, it’s more about the sameness than any differences. We’re going to do this for the future, and the past.”