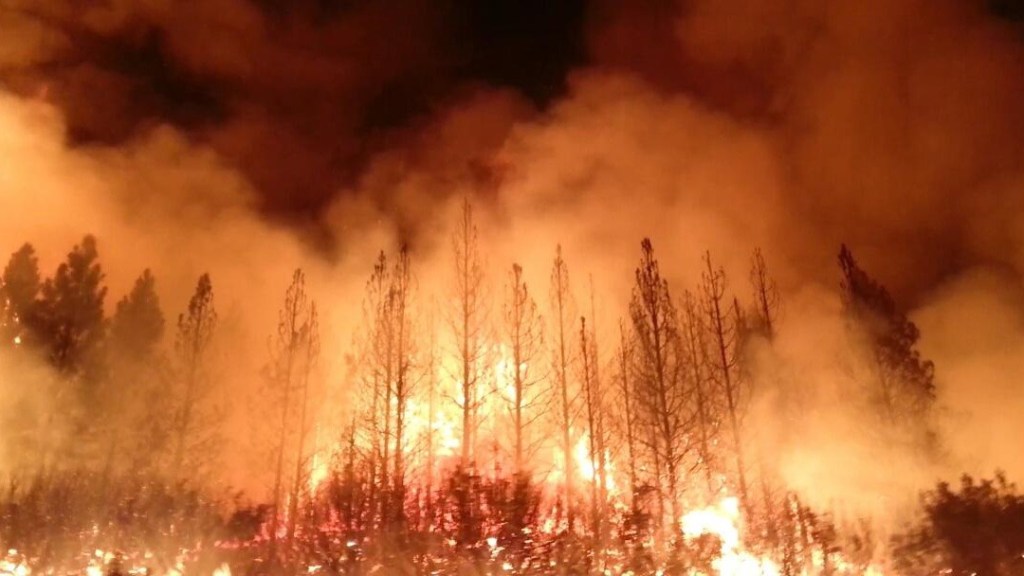 The Forest Service can’t keep up with the rising costs of fighting wildfires in a warming world.

As climate change dries out fire-prone forests, the frequency and intensity of forest fires are increasing. Between 1985 and 1999, the federal government never spent more than $1 billion on fire suppression in a single year, according to this National Interagency Fire Center table [PDF] of firefighting costs since the mid-’80s.

But in 2000, the federal bill came in at $1.4 billion, and then it continued to increase, exceeding $1.5 billion five times from 2006 to 2012. And the number of acres of forest burned each year has also been rising.

This year has been a nightmare fire season in the American West: The U.S. Forest Service, which incurs most of the nation’s forest-fire suppression costs, ran out of firefighting money. Again. From E&E Publishing:

Lightning bolts rained across the West in August, sparking hundreds of wildfires in California, Oregon, Idaho, and Montana, and pushing the cash-strapped Forest Service to the brink.

The service had at that point spent $967 million battling wildfires that had torched more than 3.4 million acres in 2013. Its emergency fund exhausted, it had about $50 million left — enough for about half a week.

That’s become business as usual for an agency that’s run out of wildfire suppression funds seven times in the last 12 years. So Chief Tom Tidwell did what his predecessors had done: He raided the agency’s nonfire accounts to make up the shortfall. …

The so-called fire borrowing — a result of insufficient appropriations — has happened with increasing frequency as wildfires have grown more intense and more homes are built in the forest.

The practice of raiding non-firefighting funds to fight forest fires fuels a vicious cycle. It takes money away from programs that clear would-be fuel out of national forests and it reduces spending on research into firefighting strategies. It also robs reforestation programs of appropriated funds.

E&E Publishing reports that the White House is looking for a solution to what has become an entrenched funding problem. One possibility that’s being explored is treating wildfires like other emergency disasters, funded from the same pot of money that helps repair cities after they are hit by wild storms.

“For whatever reason, lightning strikes that start forest fires are treated differently from a funding perspective than hurricanes and tornadoes and other natural disasters,” Agriculture Secretary Tom Vilsack said recently. “We think there should be greater alignment.”