How CO2 is killing the cutest snails you haven't seen 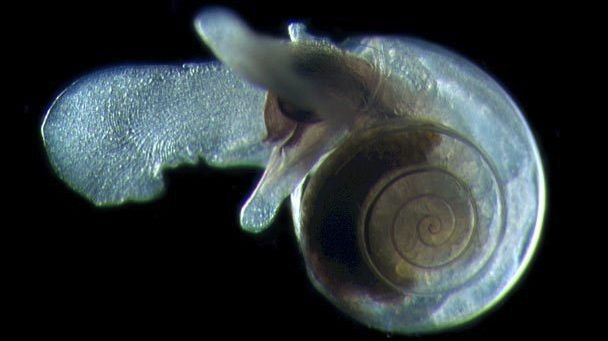 How CO2 is killing the cutest snails you haven’t seen

Today’s pteropods – pea-sized oceanic snails – may look pretty cute, but they must’ve done something truly rotten to rack up enough bad karma to end up in the world as they know it today. If they can manage to survive being gobbled up by fish such as salmon, herring, and mackerel, they still have to worry about ocean acidification melting off their shells.

Pteropods rely on aragonite – an form of calcium carbonate – to make their wee little shells, but when excess CO2 cranks down the ocean’s pH, that easily erodible base material starts to dissolve. It’s a phenomenon we’ve known about for a while, but a new study shows just how bad it is out there for these miniature mollusks: More than half of the ones found in the waters just off the West Coast now show severe shell damage — they’re thinned out, pitted, and pocked.

The sad state of their husks probably has to do with the fact that, since the industrial revolution, these waters have one-sixth of the aragonite available. Scientists project that this number will continue to dip, meaning that by 2050 pteropods shells will be dissolving at a rate three times higher than what we see today.

But it’s not really just about the snails. Because pteropods are at the base of the food chain, what happens to them shakes up the ecosystem from the ground up. So, even if what’s happening to the pteropods themselves isn’t enough to melt your heart (though, really, how could it not?), the fact that they’re having a rough time translates to fewer cute ocean critters all around – as well as fewer of the ones that we most like to munch.