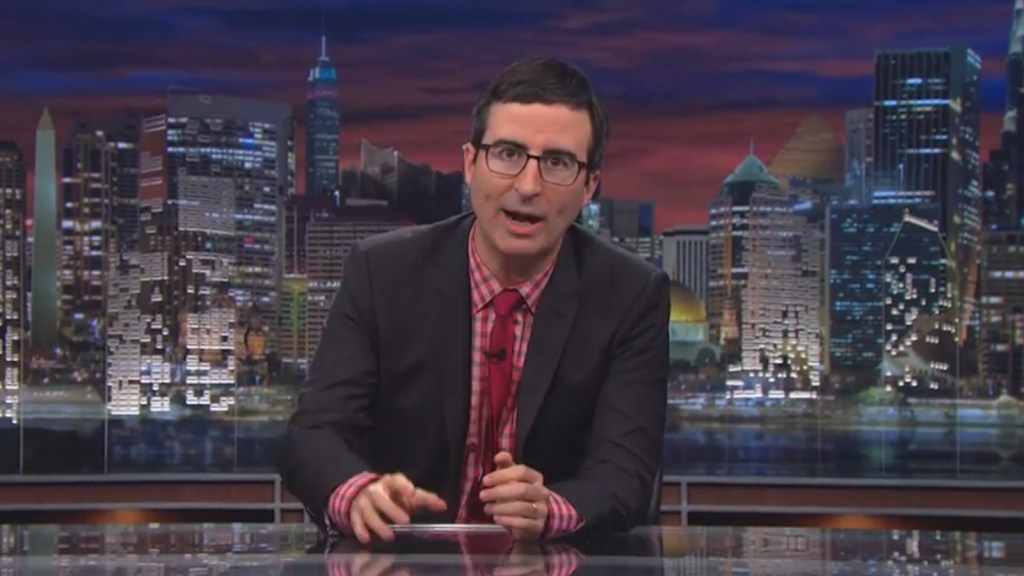 In late April, former Daily Show correspondent John Oliver kicked off his HBO news-satire program, Last Week Tonight. The premiere episode featured an exclusive televised interview with retired Gen. Keith Alexander, his first since stepping down as director of the National Security Agency. “The Cowboy of the NSA,” Foreign Policy magazine dubbed him. “Never before has anyone in America’s intelligence sphere come close to his degree of power, the number of people under his command, the expanse of his rule, the length of his reign, or the depth of his secrecy,” Wired declared.

In other words, it was a pretty good get for John Oliver. So how, exactly, did Last Week Tonight — a fledgling late-night, cable TV comedy show hosted by a British comic — land this exclusive?

“I think we called him, I think that’s it,” Oliver says, laughing. “He was a good sport.”

Oliver, who spent nearly eight years at The Daily Show and has a solid background in political satire, is off to a good start. His weekly series — which offers biting commentary on the past week’s biggest news stories, both national and international — is barely into its inaugural season, and it seems to be hitting the right notes. Matt Wilstein at Mediaite called the show, “the Al Jazeera America of late night” — a label Oliver finds flattering, but far too lofty.

“That is definitely an attractive-sounding sequence of words; I’m pretty sure that is meaningless,” he says. “It’s a comedy show, just about things that we’re interested in. So, yeah, we’ll kind of look off the map a little bit, which will mean we’ll end up looking at Supreme Court cases and foreign elections and international issues just because they’re interesting and people don’t joke about them much, and there’s fun to be had there. But, no, it’s not journalism, it’s comedy — it’s comedy first, and it’s comedy second … There might just be a single serious point wrapped up in 35 stupid jokes.”

Oliver’s assessment may be accurate, but it doesn’t give his show enough credit. Last Week Tonight has so far aired just three episodes (the fourth, featuring CNN’s Fareed Zakaria, airs this Sunday), but it’s already covered some important ground. In their first episode, Oliver and his team did a long segment on the Indian general election, the result of which could quite possibly launch a new round of violence and nuke-related tensions between India and Pakistan. “The seed underneath that whole act of jokes was really that if this isn’t interesting, nothing is interesting,” Oliver explains. “And the lack of reporting on it just seemed crazy considering how [many] interesting, and funny, and hugely consequential things were happening.” In a subsequent episode, Oliver delivered a thoughtful 12-minute monologue on the death penalty. “Look, I will acknowledge that was a slightly stupid thing to do in a second show on air,” he admits. “It’s just that that did feel like the biggest thing of that week; the Oklahoma botched execution threw up so many interesting things to me that I thought it was worth trying, at least.”

In the second episode, Oliver also discussed the recent implementation of a Shariah criminal code in Brunei (the penal code could result in, among other terrible things, gay couples being sentenced to death by stoning). During the segment, Oliver pointed out that the Obama administration had been largely silent on this human rights issue, and that the Last Week Tonight crew had even called the State Department to ask for comment. When I mentioned to him that what he had just described is indeed the work of a reporter, he — again — just laughed. “That is some low-scale reporting, though; that is only one step above a prank phone call,” he said. “Literally, a single phone call to say, ‘Hold on, is there any statement on this at all,’ and having them say, ‘No, who’s this?'” (Two days after the Brunei segment aired, the State Department told reporters that the U.S. ambassador to Brunei had conveyed concerns to the government there.)

Regardless of Oliver’s insistence that Last Week Tonight is not in any respect a journalistic enterprise (“No!” as he put it. “In no respect, in no respect, whatsoever”), he and his team certainly observe some of the same standards that a newsroom does; in some cases, even higher standards. In preparing for upcoming episodes, Oliver & Co. will often reach out to journalists or experts in a certain field for more information and perspective. For instance, prior to the Keith Alexander interview, they got in touch with Shane Harris, who profiled Alexander for Foreign Policy late last year. Furthermore, their staff includes Charles Wilson, an alumnus of the New York Times and The New Yorker, who now serves as the show’s “journalistic fact-checker,” in Oliver’s words.

“You can’t build a joke on sand, because otherwise then the joke doesn’t work and … everything falls apart,” Oliver says. “So you gotta make sure, even if it’s sometimes incredibly frustrating, if you get excited about a joke angle, and then your fact-checker says, ‘Yeah, you can’t say that. That’s not right.’ And it’s a tough job. I remember when I was talking to Charles before he joined the show, I was just saying, ‘It is the thankless position to have to walk into a room that has kind of a joyful momentum behind it … and be the one saying, ‘Yeah, you can’t do any of that. It’s not true.'”

None of this is to say that they can’t indulge in sillier, more lighthearted fare, either. Last Week Tonight recently aired a pair of fake, truly NSFW political attack ads, one of which includes shots of an old, wrinkled penis that is supposed to represent Senate Minority Leader Mitch McConnell. (Click here to read Oliver’s explanation of how this segment came about, and how they auditioned and picked the perfect penis to represent McConnell.)

In the same episode, Oliver expressed his frustration with the so-called climate “debate” in America by staging a more representative debate between a few climate skeptics and nearly a hundred scientists. (These numbers — 97 and three — were based on a now-world famous study of published climate science papers, showing that 97 percent of studies that took a stand on whether humans are warming the planet said the answer is “yes.”) One of the guys on the correct side of the “debate” was Bill Nye (the Science Guy), who was booked for the show basically at the last minute.

“We just wanted to really play with that idea that the very fact that the climate debate is framed as a debate at all is problematic,” Oliver says. “So, we just had this idea, when we were talking it through, ‘Oh, well, how about having 97 scientists in a room talking about it, because that would look unwieldy and ridiculous.’ And then we found out late Saturday night — so we tape early Sunday evening [in front of a live audience in New York City] — that Bill Nye was actually in [town] … So the Bill Nye elements came basically a few hours before we shot … We’d looked into the fire regulations for having 100 people storm a stage, so we’d kind of done that, we’d looked into that for a couple of days before, when we came up with the idea and wanted to do it. But Bill Nye never even got to rehearse it … It all came together pretty fast.”

Oliver is confident they’ll do more, in-depth climate pieces in the near future. However, it’s not because he’s passionate about climate science; it’s excellent fodder for comedy. “I’m not an activist, but as a comedian, some of how it’s talked about is incredibly funny to me,” he says. “The stridency, and the intense comfort with a lack of scientific information, is ludicrous — it’s objectively ludicrous. So I’m attracted to going to wherever the biggest hypocrisy is, and there feels like there’s some good mining to be done regarding environmental issues … This world will be a complete ball of fire before it stops being funny.”

As for whatever else lies in the future for Last Week Tonight With John Oliver, it’s anybody’s guess — at least that’s what its host will tell you: “I’m not sure we entirely know what the show is yet, or how we should be making it,” Oliver says. “We’re not in a rhythm; we’re in kind of survival mode — it’s controlled drowning at the moment … We haven’t done anything; we’ve only done three shows, which is nothing, so we’re still working everything out. That is the exciting and the terrifying thing … It’s definitely fun — frightening, and fun.”

To listen to my full interview with John Oliver on this week’s Inquiring Minds podcast, click below: