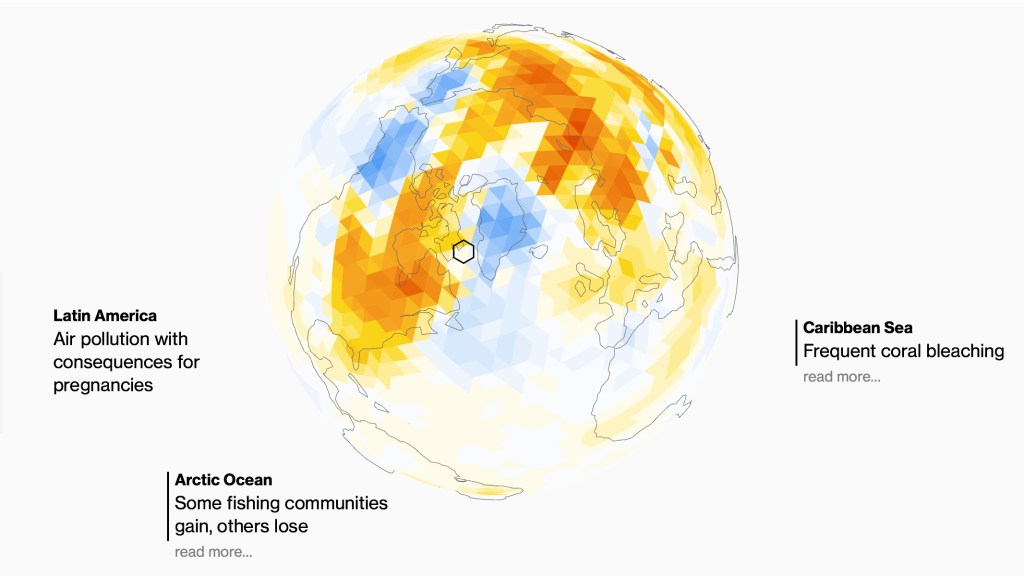 Climate science is complicated. Last month, we called the 139-page synthesis of the Intergovernmental Panel on Climate Change’s Fifth Assessment Report “breezy by IPCC standards.” And then summed it up in 10 things you need to know. Meanwhile, some climate researchers and data viz whizzes in Oslo, Norway, cooked up an even better way to make the report comprehensible and interesting.

The scientists, with an outfit called CICERO, and the techies, with a company called Bengler, set out to remix mountains of data from the most comprehensive climate change study ever produced into an interactive timeline that shows how the future of the world might look, complete with a disco-ball Earth to map temperature change, and news headlines from the future, warming world.

The project is called Global Weirding, a term that the website defines thusly:

Describes how the rise in average global temperature leads to all sorts of crazy things — from hotter heat spells to colder cold spells, more drought and intense flooding, as well as slow-onset changes such as ocean acidification and sea level rise. Also includes oddball things such as jellyfish clogging up the pipes of nuclear power plants, forcing them to shut down.

Yep. That’s pretty weird alright. Here’s the project’s promotional video, with a few more details on what these brainy people did, and even more jellyfish:

So what is this thing like? Well, I spent some quality time playing the educational internet game (Grist pays me to do this!) and the following is a snapshot of what I learned.

When I ran the timeline under the “Do nothing” scenario — where humanity keeps on burning fossils for energy and multiplying like fruit flies — I got a reddening, sparkly sphere and increasingly dire headlines as I scrolled further into the future:

They’re not just making this shit up. Each one of these headlines is hitched to a citation from the IPCC report. That climate epidemics headline, for example, comes from research that suggests changes in weather patterns will threaten human health in Latin America by spreading diseases to new areas.

But just like the IPCC report itself, the Global Weirding project offers several possible scenarios: “Do nothing,” “Do something,” and “All hands on deck.”

The “All hands on deck” future, where emissions peak today and go negative by 2100, gives you a somewhat different set of headlines:

OK, so it’s still kind of scary, but that’s part of the point. This trippy simulation is a good reminder that even if we get real serious about fixing the climate in a big hurry, harsh environmental changes are coming.

Which is all the more reason for reducing emissions and building resilience: Taking action now could make the difference between our shared survival and the collapse of civilization. Gulp.

Now stop reading and go play with climate strange! Put your own spin on the destiny of our shared disco ball. Just don’t forget to stretch out first. Travolta didn’t just bust those moves cold.