Making the connections on tar-sands pollution, racism, and sexism 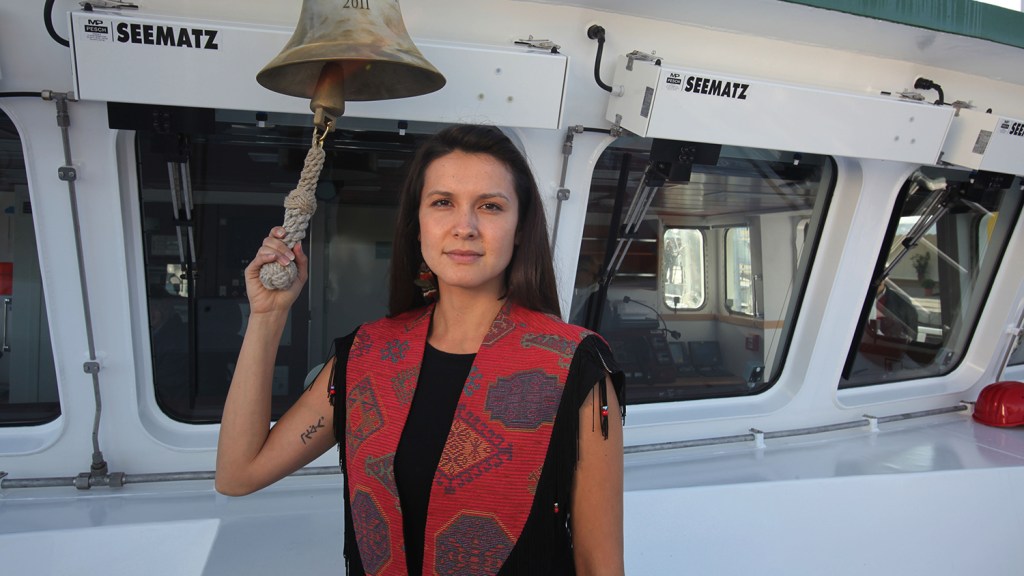 Making the connections on tar-sands pollution, racism, and sexism

Melina Laboucan-Massimo was born in the wilds of northern Alberta, Canada, in a tiny town aptly named Peace River. She spent a lot of her childhood in Little Buffalo, an even tinier town about 65 miles to the east, where most of her family still lives. A member of the Lubicon Cree, one of Canada’s First Nations, she was raised on the land like her parents and grandparents: hunting moose and drying the meat, using local plants as medicines, spending summers deep in the boreal forests and muskeg swamps and winters in a village with no running water.

Her community’s traditional lifestyle is under threat from oil development in the nearby Alberta tar sands, and that inspired Laboucan-Massimo to study social sciences at the University of Alberta at Edmonton and to become an activist. Today, the 34-year-old is one of the most unflappable leaders in the climate fight. As a climate and energy campaigner for Greenpeace Canada, she has traveled across Canada and the globe warning about the dangers of tar-sands development and testified before the U.S. Congress on Keystone XL. She’s also wrapping up a master’s degree at the University of Victoria on indigenous governance with a focus on renewable energy in First Nation communities.

But Laboucan-Massimo has another mission, one that she sees as fundamentally linked to all of the above: To make the world a safer, more equitable place for women. “The Earth is our Mother,” she says. “Violence against the Earth begets violence against women.”

Although she’s believed this all her life, the truth hit home a few years ago. In July 2013, Laboucan-Massimo’s 25-year-old sister, Bella, fell 31 stories from the balcony of a high-rise in Toronto. The case was classified as a “suspicious death” and remains unsolved. The same year, Laboucan-Massimo also lost a female cousin to domestic violence. And while these losses have had a huge impact on her participation in Canada’s Murdered and Missing Indigenous Women campaign (#MMIW), that involvement is, she says, nothing new: From unconventional oil extraction to human rights abuses to community-run solar, all of this, for Laboucan-Massimo, is about justice ­– for women, for indigenous peoples, for the planet.

I caught up with Laboucan-Massimo to talk about what it’s like to see the impacts of tar-sands development firsthand, the connections between violence against women and violence against the Earth, and how, despite it all, she keeps the faith.

On seeing tar-sands devastation up close:

I remember going out in the wagon with my grandparents, seeing the beauty and the vastness of our territory. The beauty of the land was really imprinted on me from a young age.

But as I started getting older, it was really intense seeing the amount of industry that came in, flooding the area. How they started paving roads and making cutlines. Normally the muskeg is lush; we have underground water systems and aquifers. But seeing the land dry up, the forest fires. When there was a massive oil spill [near Little Buffalo] four years ago, people couldn’t breathe. Their eyes were burning, they were nauseous, they had headaches; they had to close down the school because the teachers were feeling so ill. There was no emergency response plan. The government didn’t inform the community; like, “Hey, you’re in one of the biggest oil spills in Alberta’s history.”

Seeing the immensity of the spill and how horrible it was, seeing how my family was being treated­ — it was just really alarming. Around the time of the spill, there were a hundred forest fires in Alberta, some burning out of control. It was really scary. If a forest fire got into the area where the oil spillway was, it could just erupt.

On the tar-sands campaign, then and now:

I was doing a master’s in environmental studies [in 2008] and all the research I was doing on the tar sands … There was such a feeling in the pit of my stomach: ‘Why don’t I know this information? Why doesn’t my family know this information?’ I realized I had to start campaigning on it fulltime. It is the biggest industrial development on the face of our planet. And it was like, ‘Really, nobody’s talking about this?’

I’ve been in this movement with many other people, both local and around the world. We’ve had to raise the alarm bell. We’ve had to go in and question shareholders and CEOs, we’ve had to do major protests outside these companies’ offices around the world, march in the streets, lobby politicians in other countries to divest. The Canadian government wasn’t listening — especially in Alberta. They were so foolhardy: ‘We’re going to be an energy superpower.’ Now they’ve had to eat their words because they put all their eggs in one basket.

People are watching [the tar-sands companies] and they know that there are human rights violations. They don’t have the social license they thought they did.

On growing up with Mother Earth and matriarchy:

My mom was a feminist, growing up in the 1960s, so that was always instilled in me, from my mom’s side. On my dad’s side, the Cree side, you could see the respect that women had in our community, the respect that my grandmother had. In indigenous communities, we’ve always had a special place for women. Many of these communities are matriarchal. Women have more decision-making power; our roles and positions within our communities were more respected. There was more balance between the genders. Colonization has impacted our communities in such a detrimental way. Government policies have imposed a kind of patriarchy.

On climate justice and gender justice:

The systems of patriarchy, capitalism, colonization, and imperialism are based on a system of power and dominance. When you have these types of systems governing the way a society lives, that’s how people are being treated on the ground. That’s how the Earth is being treated. Indigenous people have always known that. Our relationship with Mother Earth is an attempt to be reciprocal — the cycle of life, you know.

On violence against women in resource extraction communities:

There is definitely an increase in violence against women [in these areas]. These are transient workers — workers that don’t have a sense of community, that are coming to essentially reap the “benefits” of the land, to make $150,000 and then leave and go buy a house somewhere else. They’re working 12-hour shifts, seven days a week for three weeks at a time. A lot of people get addicted to substances because they’re trying to stay awake! It’s a place where there are all these drugs and alcohol. And there’s all this sex work that happens. Underage workers that shouldn’t be there. It definitely leads to a whole host of social problems for the community.

On developing viable alternatives to oil:

People in Alberta, to a certain extent, are economic hostages. Oil and gas is the only way to go: That’s how it’s been pitched to communities in the Alberta tar sands. That’s the way we create jobs, create an economy for our communities. But that’s a false paradigm. Germany has 400,000 jobs [in renewable energy industries.] We have to create the changes that we want to see.

We had a community meeting last year [in Little Buffalo] to talk about solar. A lot of people wanted to see it — they didn’t know what it would actually look like. Instead of talking about what the solutions are, [this project is] actually implementing them. The solar panels will power the health building, right by the school. We can’t just talk about it – we have to actually do it. What does energy sovereignty look like? We can’t just say no; we have to say, ‘What does yes look like?’

On making it as a long-term activist:

There are times you have to take a step back and rejuvenate. In the beginning, in my 20s — and even into my 30s — I definitely had burnout at least two times. You’re pushing your body at a rate that you can’t sustain. I think we’re pushing so hard because we want to see change happen in our lifetimes, but this is a long-term campaign. It’s not something you can work on for a year or two and expect something to change.

It’s about learning how to live a life that’s full of joy and full of love — figuring out a way to make that change without having to constantly sacrifice ourselves.