The streets of Ellicott City, Maryland, became raging rivers on Saturday, with cars tossed around like toy boats after nearly six inches of rain fell in just two hours. Rainfall that intense is a 1-in-1,000 year event for the area, according to the National Weather Service.

While downpours that intense are rare, heavy rainfall events have been on the rise in the region and nationwide thanks to the warming of Earth’s atmosphere caused by accumulating greenhouse gases. That trend is expected to continue as temperatures steadily rise.

The rains and ensuing floods were the product of stormy weather across parts of the mid-Atlantic and Northeast over the weekend. Ellicott City happened to be caught where one storm formed right after the other and where slow-moving rains continually fell over the same area.

The high moisture content of the atmosphere also meant there was plenty of water for the storms to wring out. More than 4.5 inches of rain fell in just one hour, the NWS reported. The total for the whole event was 6.5 inches.

“It was pretty impressive,” Luis Rosa, a meteorologist with the NWS office for Baltimore and Washington, D.C., said.

Unlike the massive floods that swept through parts of West Virginia in June, this flooding “was very localized,” Rosa said. And while the rugged topography of West Virginia helped concentrate flooding in narrow valleys, the urbanization of the impacted area of Maryland contributed in this case. Concrete and asphalt block the absorption of water into the ground, meaning more water contributing to floods.

That water also poured into the Patapsco River, which “rose from nothing to major flooding” in a couple hours, Rosa said.

Two people swept away by the floodwaters were killed, according to news reports.

Preliminary calculations by a NWS hydrologist suggest the rain event was a once-a-millennium event, or one that has a 0.1 percent chance of occurring in any given year, according to the Baltimore Sun.

While river levels have subsided and cleanup has begun, Maryland, like the U.S. as a whole, faces more such events in the future as the planet continues to warm thanks to human emissions of heat-trapping greenhouse gases. 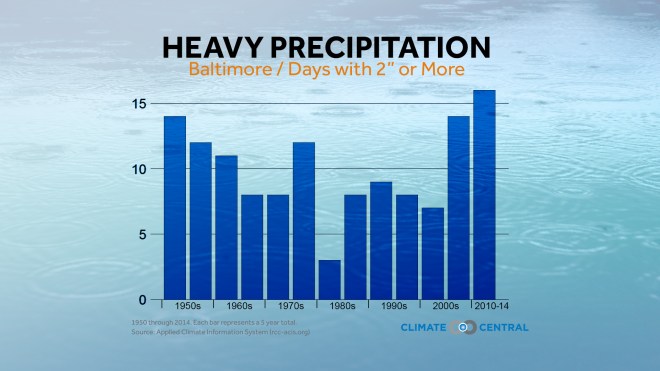 Trends in heavy precipitation of more than two inches in Baltimore.Climate Central

As the temperature of the atmosphere rises, it can hold more moisture, meaning the storms of the future will have more available to turn into torrential rains.

This trend is already visible across the United States, as well as in Maryland. Between 1958 and 2012, the heaviest 1 percent of all rainfall events rose 71 percent in the northeastern part of the country, including Maryland.

There has also been a jump in the number of days per year with more than two inches of rain in Baltimore since 1950, as well as a steady increase in that measure nationwide.

In terms of inland flooding, which depends not only on rainfall, but on factors like topography, land use, and structures like levees, Maryland is expected to see increases of between 40 and 60 percent in the intensity and duration of such events by mid-century, according to a Climate Central analysis.

The Movement for Black Lives calls for fossil fuel divestment