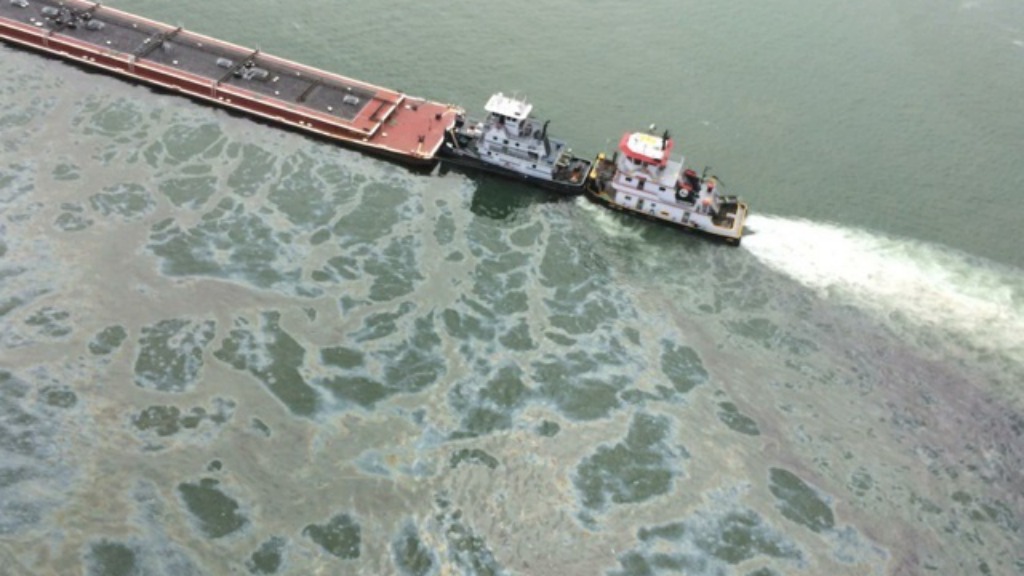 The accident-prone oil-transportation sector is commemorating the 25th anniversary of the Exxon Valdez grounding in Alaska with a large oil spill on the other side of the country.

An oil barge-versus-ship accident in Texas’s Galveston Bay on Saturday triggered the largest Gulf of Mexico oil spill since the Deepwater Horizon disaster. Galveston Bay isn’t really a bay; it’s one of America’s largest and most ecologically productive estuaries, and it’s surrounded by wildlife refuges. Oil quickly started coating wildlife at the Bolivar Flats Shorebird Sanctuary. A Texas wildlife official told the L.A. Times that “hundreds or thousands of birds” are threatened:

The cause of the crash was still under investigation Sunday, according to Coast Guard Lt. Sam Danus. Two crew members aboard the tug and barge were hospitalized as a precaution because of exposure to hydrogen sulfide, Danus said.

The barge was carrying nearly a million gallons of marine fuel oil and was being towed by the Miss Susan tugboat, Danus told The Times. He said only one of the barge’s tanks was breached, and although it contained about 168,000 gallons of oil, it was not clear how much oil had spilled. Crews were working Sunday to remove the remaining oil from the barge, he said.

Officials optimistically asserted that the cleanup effort, which already involves hundreds of people and 24 vessels, may take days.

We’re willing to wager it takes longer than that — and much longer still for the environment to recover. Just look at how long the effects of the March 24, 1989 Exxon Valdez accident continue to linger in Alaska, where wildlife populations and fisheries remain in tatters a quarter of a century later.