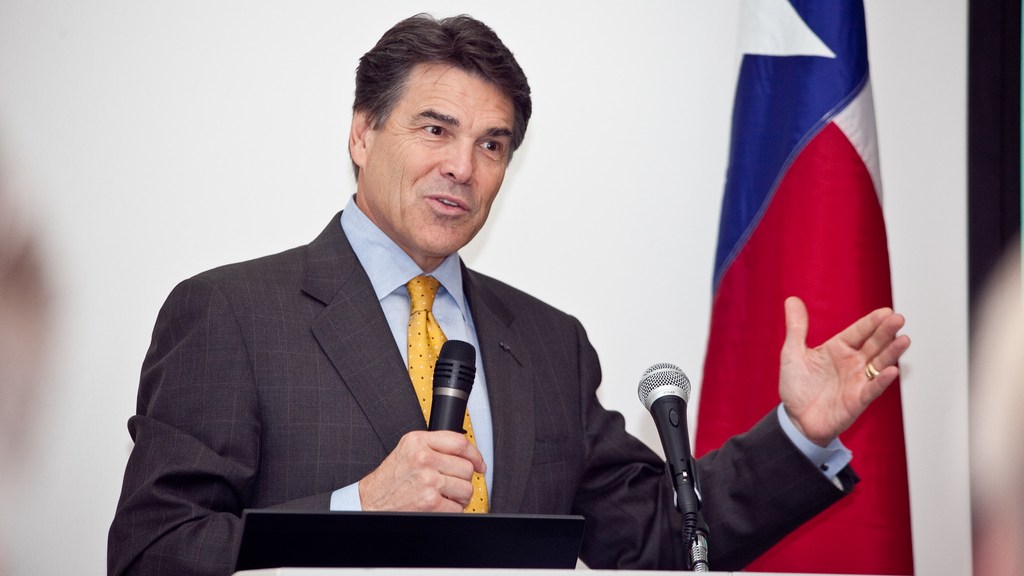 When former Texas Gov. Rick Perry launched his bid for the Republican presidential nomination earlier this month, he declared his campaign would emphasize energy policy. “Energy is vital to our economy, and to our national security,” Perry said during his announcement speech. He vowed to green-light the controversial Keystone XL pipeline.

Perry’s staunch support of the energy industry is nothing new; he was a reliable ally of the energy sector throughout his 14 years as governor. But this year, Perry gained a new incentive for helping energy companies: He started working for one. And two weeks into his presidential campaign, he’s still on its payroll.

On Feb. 3, two weeks after ending his term as governor, Perry took a position on the corporate board of Energy Transfer Partners, a Texas-based pipeline company that transports natural gas and crude oil. “The Board selected Mr. Perry to serve as a director because of his vast experience as an executive in the highest office of state government,” ETP’s website says. “In addition, Mr. Perry has been involved in finance and budget planning processes throughout his career in government as a member of the Texas House Appropriations Committee, the Legislative Budget Board and as Governor.”

In a filing with the Securities and Exchange Commission, ETP said Perry could “receive cash compensation” as well as “equity compensation.” The company declined to disclose how much Perry will be paid for the gig and isn’t required to file disclosures revealing that figure until next year, but in the past the post has come with about $50,000 in annual salary. “You can expect compensation to be along the same lines as what was [last] reported,” an ETP spokesperson wrote in an email to Mother Jones.

Politicians running for higher office typically step down from corporate positions while campaigning in order to avoid a conflict of interest. Jeb Bush, for example, began to leave his spots on corporate boards last year in preparation for his presidential run. The ETP spokesperson confirmed Perry still sits on the board. (He’s listed as one of seven members of the board on the company’s website.) A spokesperson for Perry’s campaign didn’t respond to a request for comment.

Perhaps not coincidentally, Kelcy Warren, the company’s CEO, has been a major backer of Perry’s political career. The billionaire contributed more than $250,000 to Perry’s super-PAC in 2012 during his first campaign for president.

As Mother Jones’ Bryan Schatz detailed last month, ETP is embroiled in a controversial natural gas pipeline project that has riled up locals in Texas. The company — working with the Mexico-based Grupo Carso, an industrial conglomerate owned by billionaire Carlos Slim — is getting ready to start construction later this year of a 42-inch-wide, 143-mile-long pipeline that will run outside Big Bend National Park and is scheduled to be finished in 2017.

An ETP subsidiary is also seeking permission to construct the 1,100-mile Bakken Pipeline, which would carry crude oil from North Dakota to Illinois, and from there to refineries in Texas. If regulators in Iowa grant permission to ETP, this 30-inch pipeline could transport up to 570,000 barrels of oil per day — about half the amount that would flow through the Keystone XL pipeline. Just days before joining ETP’s board, Perry appeared on Iowa television and endorsed construction of the Bakken Pipeline. “I don’t have a problem with that — it’s a pipeline, it’s underground,” Perry said when asked about farmers’ land possibly being seized by eminent domain for this pipeline project. He added, “We probably have as safe a pipeline industry in the country as there is in the world.”

Twenty local groups have formed the Bakken Pipeline Resistance Coalition to fight the project. Even some Republicans have expressed opposition, including Republican state Rep. Bobby Kaufmann, who objected to the use of eminent domain. The Iowa Utilities Board isn’t planning to hold a public hearing on the proposal until November, when Perry will likely be crisscrossing the state to gain votes before the February Iowa caucuses. Certainly, ETP won’t object if Perry, as he stumps, talks about the need to build more pipelines. But as he pitches his drill-drill-drill energy vision, will Perry tell voters he’s on the pipeline payroll?