Depending on your frame of mind, this might be good news or bad news. Ready?

A new projection unveiled at the Lima climate talks finds that the world is on track to warm by 3 degrees Celsius by the end of this century.

“But wait,” you, well-versed as you are in international climate policy, might say. “Didn’t international governments agree back in 2009 to not allow the world to warm by more than 2 degrees Celsius, thereby averting some of the worst effects of climate change? How is this good news?”

Here’s how: This study has come out every year since 2009, but this year’s projection of 3 degrees is the lowest it has ever come up with.

So, in short: We’re on track for more warming than we want, but less warming than we feared: Research had been indicating that we could be looking at something more in the range of 4 degrees, and possibly even as much as 5.4 degrees. That would be terrifying indeed.

The official goal in the U.N. climate talks is still to keep warming below 2 degrees, but even U.N. climate change chief Christiana Figueres has said that this current round of negotiations in Lima and the one next year in Paris would be unlikely to meet that goal. “We already know, because we have a pretty good sense of what countries will be able to do in the short run, that the sum total of efforts [in Paris] will not be able to put us on the path for two degrees,” she told Reuters.

But fixating on the 2-degree target during these negotiations misses the point, some argue. “What is key for success at COP-20 in Lima is not the achievement of some specific temperature (or GHG concentration) target, but rather building a sound foundation for meaningful long-term action,” Robert Stavins, director of Harvard’s environmental economics program, told Grist.

And this new projection from the Climate Action Tracker (CAT) project is encouraging because it indicates that countries may have started to lay that foundation. According to a policy brief put out by the project, the main reason that CAT is projecting less warming this year than it was last year is because China, the U.S., and the European Union have new, post-2020 emission-reduction plans. 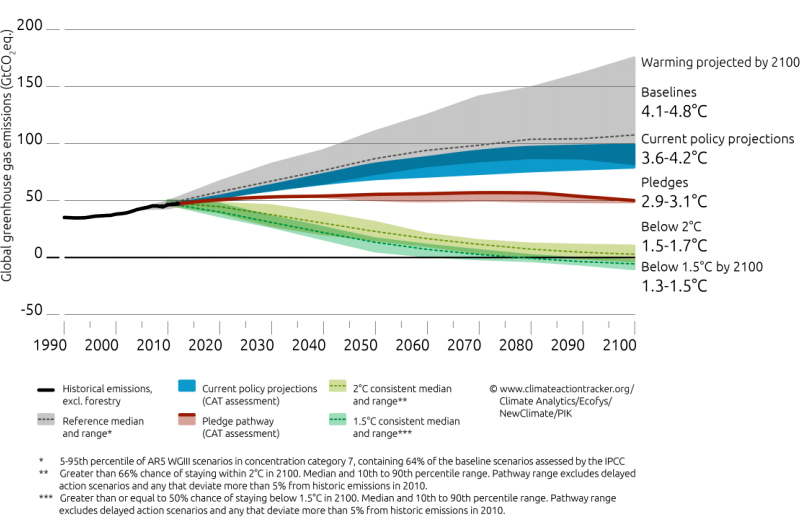 The big caveat: According to the policy brief, “There is still a substantial gap between what governments have promised to do and the total level of actions they have undertaken to date.” If promises are kept, we might top out at 3 degrees of warming. If they’re not, we’re headed for 4. Furthermore, the CAT folks remind us, 3 degrees of warming by 2100 isn’t what we want — it would actually be pretty awful.

Ultimately, as Stavins points out, “such a projection, more than 80 years out, has value only as a benchmark, not as a forecast.”

So don’t pop the champagne yet: This climate-stabilizing work isn’t close to being done. But the CAT study shows that progress is gradually being made. And that’s a tiny bit of good news for a community of climate-watchers who could use some.