The warmth that led 2014 to become the hottest year on record has continued into 2015, with last month ranking as the second-hottest January on record globally, the National Oceanic and Atmospheric Administration announced Thursday. 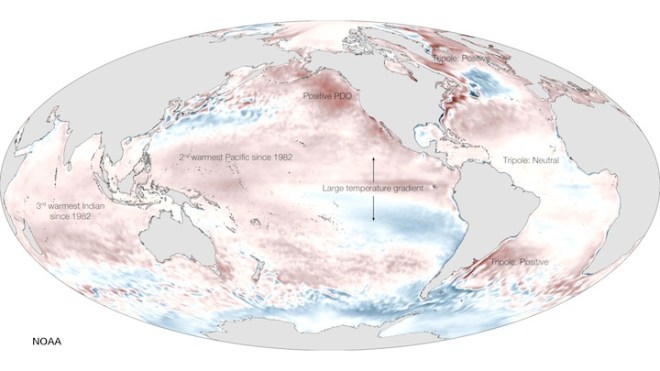 “I think it is safe to say that the warmth so far in 2015 really is a continuation of the warmth in 2014,” NOAA climatologist Jake Crouch said in an email.

All three agencies ranked 2014 as the warmest year on record by a slim margin, driven by the accumulation of heat-trapping greenhouse gases in the atmosphere. Nine of the 10 hottest years on record have all occurred in the 21st century, with the exception of the blockbuster El Nino year of 1998. There hasn’t been a record cold year set since 1911, while during the same period there have been 19 record-warm years, according to a Climate Central analysis.

The 2014 mark was largely driven by considerable heat in the world’s oceans, as illustrated in the above graphic of sea surface temperatures released by NOAA. The map shows that parts of the Pacific were the second warmest on record and the Indian Ocean was the third hottest since 1982.

“There’s a lot of warmth in the ocean,” NOAA climatologist Michelle L’Heureux said. Considering that the map shows such anomalous heat even compared to the past 30 or so years, when the signature of global warming had already emerged makes those rankings even more remarkable, she said.

The oceans on the whole were the third hottest on record for January 2015, according to NOAA. Record ocean warmth was seen off both coasts of North America; the hot waters off the West Coast has helped reinforce the unseasonably high temperatures and dry conditions in that part of the U.S.

Other ocean areas were much warmer than normal, though there were some cool spots, most notably in the North Atlantic between Greenland and Europe where record-cold sea surface temperatures were recorded.

How global temperatures shape up over the rest of the year remains to be seen, but the ocean tends to hang on to heat for much longer than land areas, which will keep temperatures elevated for awhile. And as carbon dioxide and other greenhouse gases continue to be emitted, the dice will be loaded to warmer and warmer years in the future.