When a species poisons an entire planet 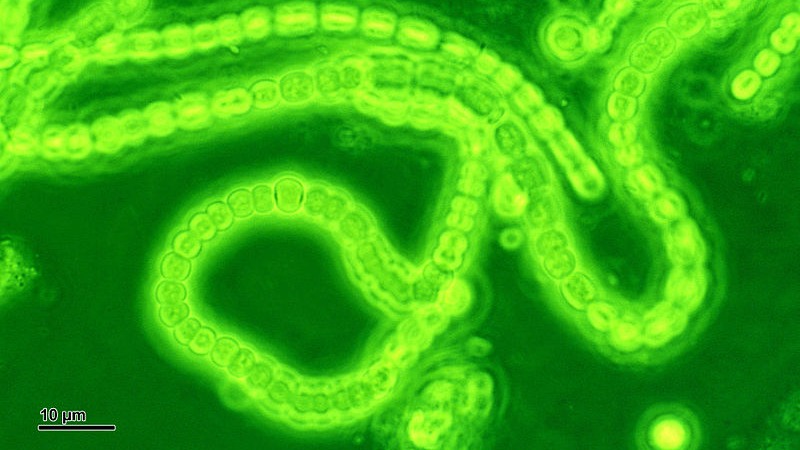 When a species poisons an entire planet

Let me tell you about a catastrophe. I don’t use that word lightly: This event was monumental, an apocalypse that was literally global in scale, and one of the most deadly disasters in Earth’s history.

It began about 2.5 billion years ago (though opinions vary). The Earth was very different then. There were no leafy plants, no animals, no insects. Although there may have been some bacterial life on land, it was the oceans that teemed with it, and even there life was far simpler than it is today. Most of the bacteria thriving on Earth were anaerobic, literally metabolizing their food without oxygen.

But then an upstart appeared, and things changed. This new life came in the form of cyanobacteria, sometimes called blue-green algae.

Cyanobacteria are photosynthetic. They convert sunlight into energy and produce oxygen as a waste product. Back then, the Earth’s atmosphere didn’t have free oxygen in it as it does today. It was locked up in water molecules, or bonded to iron in minerals.

The cyanobacteria changed that. But not at first: For a while, as they produced free oxygen as their waste, iron would bond with it and the environment could keep up with the production.

At some point, though, as cyanobacteria flourished, the minerals and other sinks became saturated. They could no longer absorb the oxygen being produced. It built up in the water, in the air. To the other bacteria living in the ocean — anaerobic bacteria, remember — oxygen was toxic. The cyanobacteria were literally respiring poison.

A die-off began, a mass extinction killing countless species of bacteria. It was the Great Oxygenation Event. But there was worse to come.

Up until this time, the atmosphere was devoid of the reactive molecule. But as oxygen abundances increased, some of it combined with methane to create carbon dioxide. Methane is a far more efficient greenhouse gas than CO2, and this methane was keeping the planet warm. As levels dropped, the Earth cooled. This triggered a massive glaciation event, a global ice age that locked the planet in its grip.

Things got so bad the cyanobacteria themselves were threatened. Their own numbers dropped, along with nearly all other life on Earth. The mass extinction that followed was vast.

But there was an exception: Some organisms could use that oxygen in their own metabolic processes. Combining oxygen with other molecules can release energy, a lot of it, and that energy is useful. It allowed these microscopic plants to grow faster, breed faster, live faster.

The anaerobic species died off, falling to the oxygen-burning plants, which prospered in this new environment. Certainly, anaerobes didn’t vanish from the Earth, but they were vanquished to low-oxygen environments such as the bottom of the ocean. They were no longer the dominant form of life on Earth.

It was perhaps the first of the mass extinctions life would face on our planet, and its impact resonates through the eons (and of course there is quite a lot of detail to this story). To this day, our atmosphere is rich in oxygen, with most multicellular life on Earth descended from the upstart oxygen breathers, and not the anaerobes.

It’s an interesting tale, don’t you think? The dominant form of life on Earth, spread to the far reaches of the globe, blissfully and blithely pumping out vast amounts of pollution, changing the environment on a planetary scale, sealing their fate. They wouldn’t have been able to stop even if they knew what they were doing, even if they had been warned far, far in advance of the effects they were creating.

If this is a cautionary tale, if there is some moral you can take away from this, you are free to extract it for yourself. If you do, perhaps you can act on it. One can hope that in this climate, change is always possible.