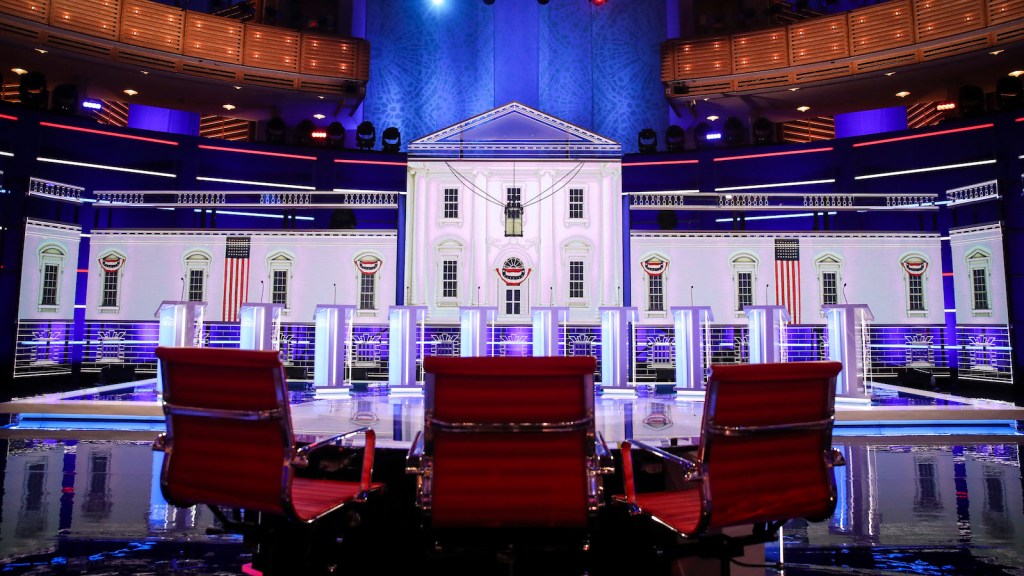 Drew Angerer / Getty Images
not up for debate

Dozens of House Democrats are calling for the climate crisis to be a central focus of the upcoming presidential and vice presidential debates.

In a letter Wednesday to the Commission on Presidential Debates, 70 lawmakers stressed that their constituents must hear from the candidates about how they plan to tackle “one of the most pressing and all-consuming issues currently facing our country.”

The demand comes on the heels of record-setting wildfires in California, an extremely active Atlantic hurricane season, and brutal August heat throughout much of the West. And a new survey of NASA satellite data shows that climate change has increased the volume of glacial lakes worldwide by about 50 percent since 1990.

Even a single question on climate change at the upcoming debates would be an improvement over 2016, when presidential debate moderators did not once bring up the rapidly worsening global crisis.

“This cannot happen again,” reads the letter, spearheaded by Representative Mike Levin of California. “Given the dire nature of the crisis, we ask that you break precedent and publicly call on the moderators to include climate in the topics that will be addressed during the debates.”

President Donald Trump has spent his first term dismissing and downplaying the climate threat. His administration has rolled back at least 100 environmental rules, including many that aimed at reining in planet-warming greenhouse gas emissions, in its relentless quest for so-called “energy dominance.” But with the election around the corner, Trump has tried to greenwash his abysmal record.

Meanwhile, 2020 Democratic presidential nominee Joe Biden and his vice presidential running mate, Senator Kamala Harris, are campaigning on a promise to address the crisis head-on, with a focus on environmental justice. In July, Biden unveiled an ambitious plan to phase out coal and gas power plants by 2035 and invest $2 trillion in renewable energy and infrastructure upgrades, with 40 percent of those funds going toward low-income and minority communities that are disproportionately affected by pollution.

Levin, who worked as an environmental attorney before being elected to office in 2018, attended the final debate in 2016 and was disappointed that climate change was ignored. To again not ask presidential candidates about such a significant threat and how they plan to deal with it would be a huge disservice to American voters, he told HuffPost by phone on Wednesday.

“I felt that it was important that we emphasize that this is no longer an issue that’s looming in the distance,” he said, noting the severe climate impacts in his home state. “It’s something that needs to be addressed and there are profound differences on this issue between the two candidates.”

Levin worked with advocacy group Climate Power 2020 on the letter. In it, he and other members of Congress note that Americans of all political stripes have made clear they are concerned about the impacts of climate change on their health, safety, and financial security.

“We understand there are four central crises that the presidential and vice-presidential candidates must address: the ongoing pandemic, a struggling economy, racial injustice, and the climate crisis,” the letter reads. “But of these four, there is one which will exacerbate each of the other three, if not addressed immediately. We need a dedicated discussion on the climate crisis that matches the importance of this moment.”

The Commission on Presidential Debates did not immediately respond to a request for comment Wednesday afternoon.

While climate change did get some questions during the Democratic presidential debates last year, the Democratic National Committee voted down a proposal to host a debate solely on the crisis — a move that infuriated climate activists.