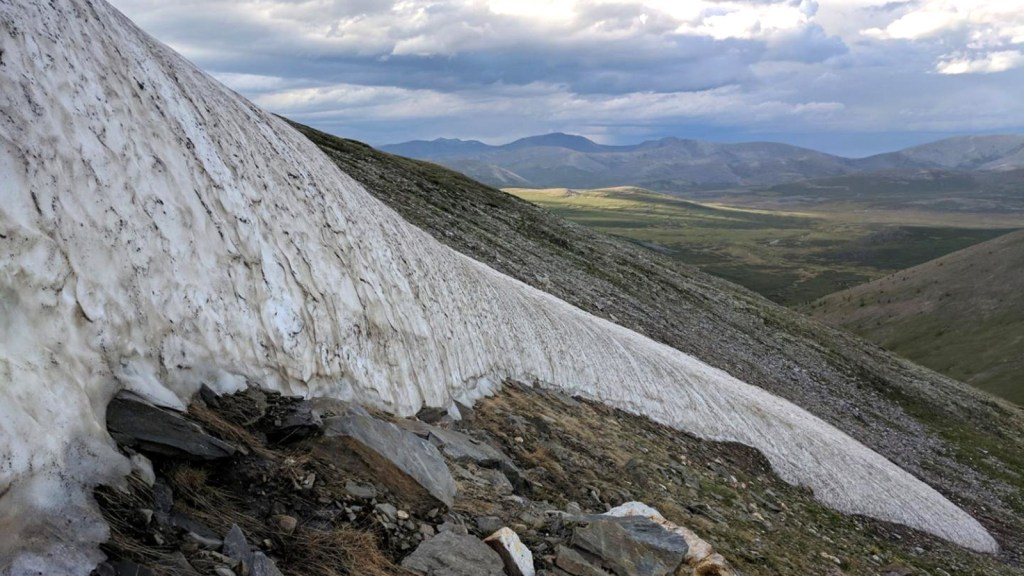 You’ve heard about melting ice caps and receding glaciers. But there’s another type of ice under threat from rising global temperatures — and when this one disappears, so will valuable insights into human history.

Ice patches are large expanses of ice and compressed snow that form in high-altitude and -latitude regions and last year-round. Imagine those snow banks that form on the side of the road after the snowplow comes through, the ones that pack in on themselves and take way longer to melt than the rest of the snow. The ice patches that have drawn the attention of researchers are kind of like that, except bigger and more ecologically significant (and not totally full of grit and car exhaust).

And as you’d expect on a planet that’s seen a few of the hottest years in recorded history in the last decade, ice patches around the world are melting.

Vanishing ice patches pose an immediate problem to the people who rely on them for their livelihoods. For instance, reindeer herders living on the tundra of northern Mongolia need ice patches to help their livestock stay cool in the summer, away from disease-bearing insects, and hydrated. Losing the ice means losing the ability to care for their animals, the group’s main source of food and income.

But there’s another problem with these melting ice patches, one that belongs to all of us: the disappearance of the history and knowledge that they contain.

“We’re losing some of our only opportunities to understand the past and to give certain groups their seat at the table in terms of our big-picture understanding of human history,“ William Taylor, a professor of archaeology at the University of Colorado, Boulder, told Grist.

The places where ice patches have formed are also often regions that have been inhabited by societies that didn’t leave behind much of an archaeological record, or any type of recorded history, limiting our knowledge of what they were like. The ancestors of the Mongolian reindeer herders, for example, likely lived in impermanent structures and made pretty much everything from organic materials. Except for the occasional burial site, there’s not much for researchers to go off of to reconstruct what their culture might have been like.

But when the ice patches thaw, a window of possibility for archeological discoveries opens — briefly. Artifacts and organic remains preserved in the ice are revealed as the patches shrink, but unless archaeologists monitoring the site return each year to collect artifacts that are revealed, any organic material that had been preserved by the ice will quickly decompose once it’s exposed to open air.

An entire subfield (fittingly called “ice patch archaeology”) sprang up to study the artifacts revealed by thawing ice, following the discovery of a Copper Age mummy called Ötzi in the Alps in 1991. Researchers are scrambling to learn everything they can about hard-to-study prehistoric societies in regions such as Yellowstone and Denali National Park in Alaska, where few cultural artifacts have endured to the present day.

“A lot of history took place long out of the view of folks that were making historic records that have persisted into the modern era,” said Taylor, who studies human-animal relationships in prehistoric societies. Right now, he’s researching ancient Mongolian domestication and herding practices, which he says transformed Mongolia from “marginal, cold, dry, empty, difficult landscapes into the heartland for world civilization and culture,” and gave rise to the Transeurasian empire of Gengis Khan. And some of the best remaining clues to how this history unfolded might be frozen in patches of ice on the tundra.

The opportunity for discoveries climate change is providing only increases the urgency of ice patch archaeologists, and not just because it’s slowly eliminating a potentially rich source of information. “All disciplines of science are recognizing that we need long-term data,” said Taylor, who told Grist that solving a large-scale problem like climate change will require as much historical information as we can get our hands on. “We need to understand how our societies came to be, we need to understand the variation in relationships between humans and the environment.”

Many ice patches are already melting completely during the summer months, some for the first time in centuries and even millennia. Mongolia is just one place where that melting ice has the potential to fill in some big gaps in the history books — even as it endangers the people in the region who still lead traditional lifestyles.