Meet the DIY firestarters trying to save California from itself 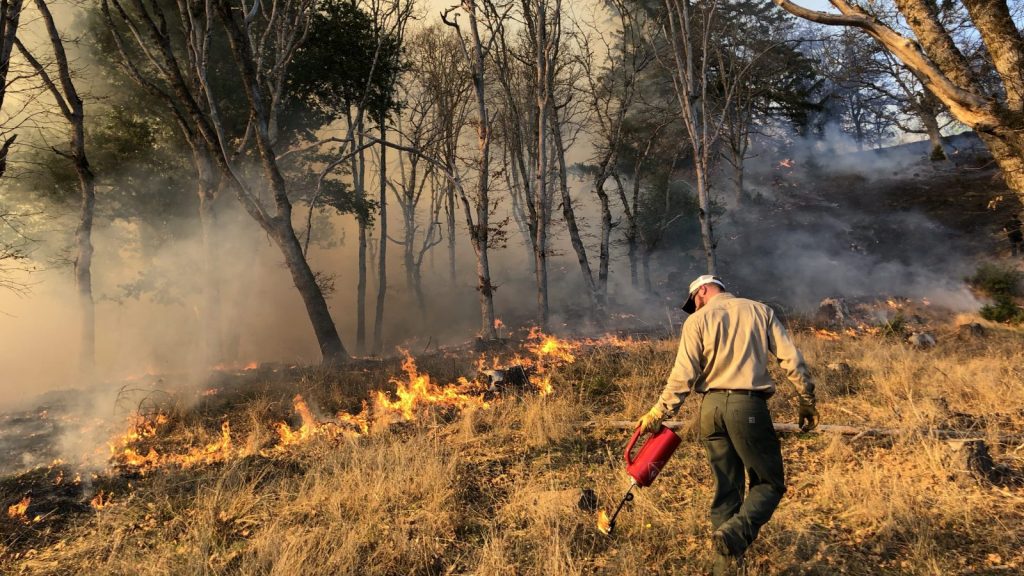 Meet the DIY firestarters trying to save California from itself

When the group started their first fire, on a ranch in Northern California, there were no firefighters calling the shots, and no hired professionals to be seen. There were just locals, making do for themselves: Aging long-haired back-to-the-landers worked shoulder to shoulder with Stetson-topped cowboys as they dripped burning oil across a field, and beat back flames when they threatened to spread too far.

“There were conservative ranchers, and hippies from the Save the Redwoods League, and college students, all working together on the same project probably for the first time ever, using fire to build community,” said Lenya Quinn-Davidson, a fire advisor for the University of California Cooperative Extension, the government system for disseminating research to farmers and land-managers.

Two thirds of California’s forestland is owned by the federal government, and it’s a similar story across the rest of the West. The other third is managed by timber companies, ranchers, owners of vacation cabins, and residents of woodland communities, like Paradise, where houses are scattered under the trees. It’s particularly difficult, and particularly important, to prepare for fire in this zone where people and wilderness meet.

There’s widespread agreement that the West needs more prescribed burns to make fire season less apocalyptic. Some 7,900 wildfires have consumed more than 3.3 million acres in California so far this year, blowing past the records set in the last decade. But if land managers burn a layer of needles, leaves, and dry branches piling up on the ground, it becomes a lot less likely that the next wildfire will grow hot enough to turn entire forests into plumes of smoke and carbon dioxide. There’s even new evidence that the light smoke from prescribed burns is a lot less harmful than smoke from intense wildfires.

So far, there’s been a lot more talk than action. Scientists and environmentalists have been calling for more controlled fires for decades. And everyone would agree that prescribed burns sounded like a good idea, then add that people needed to be careful with fire: It required professionals and environmental analysis and lots of regulation.

Now that’s changing. As massive fires sweep across the West year after year, people are beginning to realize that moving too cautiously has risks of its own. Regular Joes and Janes are setting off prescribed burns in their backyards, and the trend is spreading like … something that spreads very fast in all directions.

It started with regular people demanding answers a few years back. They knocked on Quinn-Davidson’s office door in Humboldt County, California, and asked how they could start doing prescribed burns. “I never really had a good answer for them,” she said. “And in 2017, I just kind of got tired of not having solutions.”

So she went to Nebraska to study how prescribed burn associations, collections of neighbors from across the state, manage controlled fires on some 50,000 acres a year. These associations are informal groups that pool resources and labor: Someone volunteers their water tank, another member has a trailer to haul it, others simply show up to help keep the flames under control.

When Quinn-Davidson brought the idea of DIY associations back to California the next year, it took off. “It was more successful than we could have ever anticipated,” she said. “Everyone is exhausted by how devastating and scary wildfires have become, and they want to be part of the solution.”

I wrote last year about how neighborhood burn squads were beginning to pop up where I grew up, near Grass Valley, California. Since then they have grown and spread.

Susie Kocher, a forestry advisor for the Cooperative Extension System, has also been teaching people how to do their own prescribed burns, conducting workshops up and down California. There’s nothing prohibitively dangerous or difficult about using fire to clean up the forest, she said. People routinely burn piles of branches, a practice that can actually be more risky because it generates concentrated heat. Moving fire along the forest floor is comparatively safe, she said.

“I’m not advocating that we hand drip torches to people who don’t know what they are doing. I’d just like to see us be a little more willing to change the culture of fire suppression,” Kocher said. “There are people who are comfortable because they grew up doing this and they are native Californians. If we start doing prescribed burns with kids now they will be a lot more comfortable with it.”

Of course there’s a risk inherent in letting the average person conduct controlled burns on their property, Kocher said, but there’s an even bigger risk in allowing the status quo to persist. It’s better to empower people to manage their own land, rather than letting wildfire do it for them, she said. This isn’t a silver bullet: Much of the forest in the West is owned by the government. Still, individual landowners can make a big difference because they control the forests around communities — the places where people often accidentally set fires, and where fires are most expensive and deadly.

“The thing that gives me the most hope is the potential for small private landowners to do prescribed burns,” Kocher said.