Why is cottagecore so white? 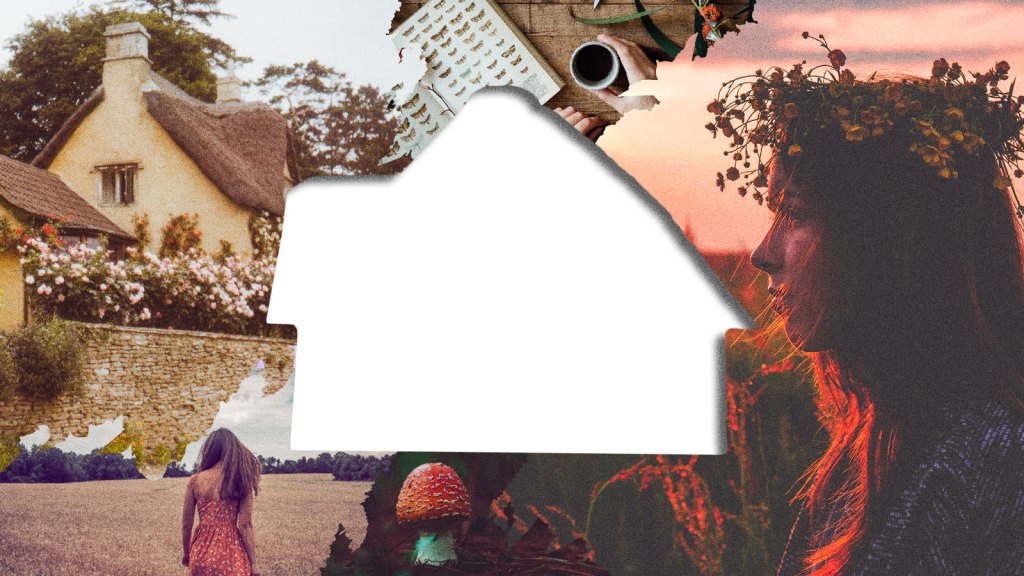 Grist
Nature for All

Why is cottagecore so white?

You would know it to see it. Anyone who has sought escape in the endless feeds of TikTok or Instagram knows a certain light-filled, pastoral aesthetic. Slim blondes in thrifted prairie dresses frolic in gardens and fields. You are convinced that you, too, can enjoy a whimsical picnic brunch under an oak tree with homemade scones and clotted cream. You can make your own mushroom earrings, or you can sew your own milkmaid cosplay and wear it as you sip tea. This is cottagecore.

I liked the look of it, and I am hardly alone — the “cottagecore” hashtag has been used more than 4 billion times on TikTok. But when I tried to look up the definition of this particular aesthetic trend, I was confused. It presented nature, and the experience of existing in it, as soft and leisurely. Life in the countryside isn’t about picnic lunches, straw hats, and muslin dresses — it’s farming from sunup to sundown, and never knowing if it will be enough.

Online commentators point out that cottagecore is far from a “natural” aesthetic; it’s often showcased as a vision of a settled wilderness, a legacy of European agriculture and expansion.

“Despite a number of its followers taking an often progressive and subversive outlook on life, Cottagecore has been also criticized for its romanticism of a Eurocentric farming life, and in the context of North American and Australian settings, an inadvertent celebration of the aesthetics of colonialism, as well as the ways it often simplifies and underestimates the labour of farmers,” a fandom website explained.

People of all racial backgrounds have shaped the American landscape, but a history of violence and displacement caused many communities of color to leave behind the land that they worked and lived on. The dual “classic” American traditions of farming and frolicking in nature reflect that history of settler colonialism. They exist based on the displacement of Indigenous people, and labor from indentured servants and enslaved people. And despite the fact that cottagecore is such a dreamy form of escapism, it still reflects that very whitewashed reality.

TikTok videos like the one below highlight the importance of remembering how people of color, especially Black communities, helped shape American agriculture. There were about a million Black farmers in the United States at the beginning of 1920s, but that number declined as violence perpetrated by their white neighbors escalated. During the Great Migration, millions of African Americans left the rural south for cities and towns across the Northeast and Midwest to escape segregation, violence, and poverty. It’s perhaps not surprising that Black faces are notably absent from the sort of pastoral dream espoused by cottagecore.

But cottagecore is more than napping in a barn and fresh-from-the-cow milk; it’s also about enjoying a Disney-fied version of nature. And there, its whiteness is hardly new either. Advertisements for equipment for activities like hiking, skiing, and kayaking tend to exclusively portray white people. Those images selling expensive tents and oars and hiking boots reinforce the stereotype of outdoor activities as white and wealthy again and again — even while many of these activities, like kayaking, have indigenous origins.

Racist policies also played a role in keeping communities of color away from outdoor activities, namely in the formation of national parks. Renowned American naturalist John Muir, whose work helped establish the national park system, expressed racist beliefs about both Black Americans and Indigneous people. Gifford Pinchot, the inaugural head of the Forest Service that oversees national parks, was a eugenicist. The canon of celebrated American conservationists that shaped the country’s wilderness today are filled with descriptions of white men and their achievements, regardless of their attitudes towards marginalized communities.

The legacy of displacement, erasure, and segregation of Black and brown people in outdoor activities continues to push those very same demographics out of enjoying nature today. Charles Thomas, the executive director of Outward Bound Adventures, identifies as African-American, and he grew up camping through the organization. He wasn’t surprised when I explained the lack of diversity in cottagecore and agreed that people of color are often threatened when accessing green spaces.

As the pandemic has slowed down international travel, people of color looking to escape their homes in national parks have been accused of making regular visitors feel “unsafe.” Thomas remembers how on one outing to a campground, a group of campers urinated on his group’s tents. And just a few years ago, a group of mainly Black and brown young campers with OBA were on a trip to a hiking trail in California and were told to leave the area.

“They said, ‘What are you doing here? This is Trump country,’” Thomas recalled.

“It’s not easy to show up [at a hiking trail] when no one looks like you … we [people of color] still don’t have equal influence over outdoor programming,” he added. “How are they going to be in the videos about the outdoors if they’re not out there for real?”

The more Varis Zima, a Korean-American from the Bay Area, learned about cottagecore, the more they noticed how little non-white representation there was. “Don’t get me wrong, I love the aesthetic with all my heart, but I don’t see enough POC on here,” they said under their handle @crowpunkin, dressed up in a costume that had a hanbok-like tie at the front, which is often seen in traditional Korean outfits. “Nor does cottagecore have to be based exclusively on ‘Western’ style clothing.”

Zima’s video was what made me start thinking more critically about the genre. “I’ve noticed that a vast majority of cottagecore-tagged content was very white and Eurocentric in choices of fashion and houses,” Zima said in an email. “I thought if cottagecore is a safe place to escape from the pressures of hegemony, why do we automatically see [Eurocentric culture] as the default?”

“I think outdoor activities are so heavily white-coded for some reason … even my family automatically thinks of those things as ‘white people things’ and we never participated much in them from the start,” they said. “I think it would be nice if outdoor activity culture was more inclusive and respectful,” especially of Indigenous communities.

Zima heard from people who said they weren’t comfortable cosplaying or making videos about cottagecore and their love for nature until they saw Zima’s video encouraging more people of color to put their own spin on the trend. They especially wanted to see outfits, architecture, and accessories from different cultures incorporated into the aesthetic online.

Aniyag Fargas, a teen from North Carolina, began to post cottagecore content on her account recently. In one of her videos, she pointed out that she was a Black woman in the genre and immediately received comments from viewers asking what race had to do with cottagecore.

“When you see these aesthetics, you see white people,” she said in a video response. “But when people of color, especially Black people do it, it’s ‘You’re trying to act white’ … it’s so annoying — it helps seeing people of your race doing it.”

Reply to @lalaloopsiestoilets I’m not the best at explaining, but representation, that’s all #fyp #foryou

Fargas always liked being in nature, she said, and began to question why she didn’t see many Black people participating in outdoor activities when she went camping for the first time with some friends a few years ago. That trip encouraged her to consider different ways to show how much she liked being outdoors. Now, she makes videos of herself in cottagecore attire, usually in flowy dresses against flowers and trees. She also started a small business on the side that uses nature themes as its inspiration.

Fargas thinks creators of color will continue to make a space for themselves both in the virtual world of cottagecore and in the real world of outdoor activities. Over the past year, she has found more and more creators that look like her and that are pointing out the need for different cultures and ideas into the online aesthetic.

“For all my non-white women who wants to get into cottagecore … just do it. Make this aesthetic into your own and have fun with it,” she said.