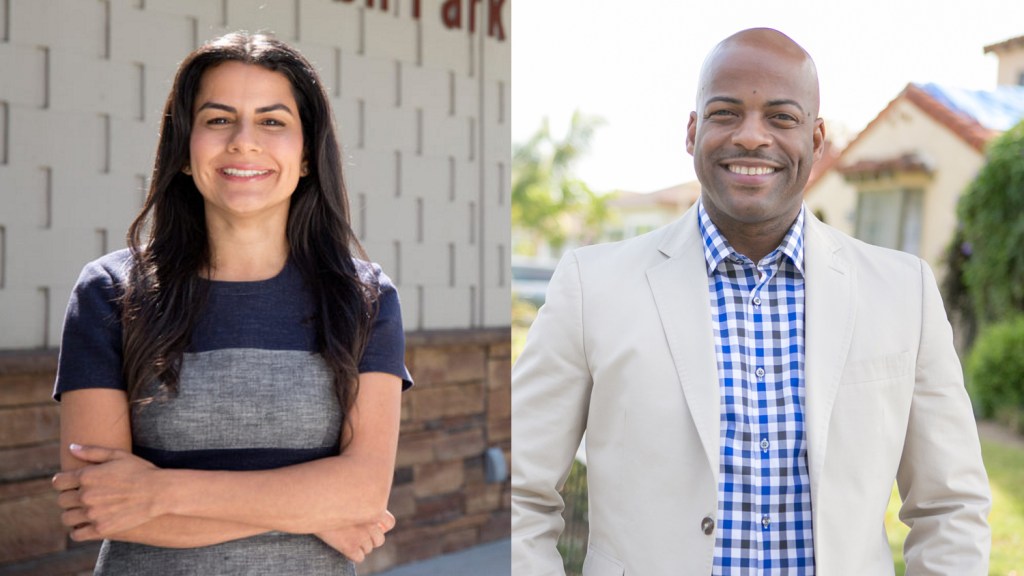 Two Democrats with markedly different records on climate and energy are vying to represent California’s 44th congressional district, and environmental issues could be decisive in the race.

Thanks to California’s 2012 switch to nonpartisan primaries, general election races can come down to two members of the same party, and that’s what has happened in this overwhelmingly Democratic district in Los Angeles, which is 68 percent Latino, 17 percent African-American, and largely lower-income. Oil refineries are big players in the district’s economy, but they take a heavy toll on the health of residents.

The upstart in the race, Nanette Barragán, wants to rein in pollution from refineries and other industrial sources, and she’s tying that effort to the broader push for clean energy and climate action. Barragán, a Latina, is a lawyer and former member of the Hermosa Beach City Council. While on the council, she was a leader of the successful campaign to prevent new oil drilling in the city and she helped to push through a ban on plastic bags and a goal to make the city carbon neutral by 2020.

Her opponent, Isadore Hall, an African-American state senator, is the more experienced politician, and he has a mixed record on environmental issues. When he was in the state Assembly from 2008 to 2014, he skipped votes on a fracking ban, a measure to protect water supplies from fracking, and bill to ban plastic bags, and he voted against a ban on styrofoam. Last year, in the Senate, he signed a letter to Gov. Jerry Brown asking for a delay in implementation of California’s cap-and-trade program for transportation fuels, and again skipped a vote on protecting drinking water from fracking-caused contamination. As of 2014, he was the second-largest recipient of oil company donations in the California legislature.

But, perhaps in recognition of the growing importance of climate change to California voters, Hall has repositioned himself in the last few years. He supported a law signed by Brown last year raising California’s renewable energy standard to 50 percent by 2030, which Hall’s spokeswoman called “the most significant and forward-thinking piece of environmental legislation in California’s history.” Hall has also backed a slew of progressive environmental laws, from strengthened regulation of oil and gas drilling operations to a capital investment program for mass transit and inter-city rail. Those votes, among others, helped him earn 90+ percent legislative ratings from both the Sierra Club and the California League of Conservation Voters in 2015. That’s an improvement over his lifetime voting score from CLCV, which is 80 percent.

Hall’s votes for climate bills also earned him public thanks from Tom Steyer’s NextGen Climate, which sent out a mailer praising Hall for supporting the legislation. (So far, NextGen has stayed out of this year’s race, although Hall’s campaign is quick to cite the mailer as evidence of his climate credentials.) Many elected leaders with strong green credentials are backing Hall, including Gov. Brown, Lt. Gov. Gavin Newsom, and two state legislators known as climate leaders, Sens. Fran Pavley and Kevin de León.

But the green groups getting involved in the race are all siding with Barragán. She has earned endorsements from the Sierra Club, the national League of Conservation Voters, the California League of Conservation Voters, and the Climate Hawks Vote PAC, a group that works to elect pro-climate candidates. R.L. Miller, cofounder of Climate Hawks Vote, is particularly passionate about Barragán. “This is the single most important California congressional race from a climate perspective,” she said earlier this year.

The Los Angeles Times also endorsed Barragán, praising her for, among other things, “commitment to the environment that this industrial district needs,” while criticizing Hall for having “consistently opposed crucial climate change policy” while he was in the Assembly.

Barragán told Grist that industrial pollution and its effects on local people are what got her interested in environmental issues. “In my home district, in Wilmington, California, you can do a toxic tour and you see kids walk around with inhalers around their necks, and nobody’s fighting for them,” she said. “There’s a big concentration of oil refineries, there’s the Port of Los Angeles right there, it’s surrounded by three freeways, and it’s very socially and economically disadvantaged. People are living below the poverty line and they live right next to these facilities. If you go to places near Wilmington, you have oil bubbling up from the surface, possible groundwater contamination issues. If you go to Watts and you have Jordan Downs [a public housing complex], you have a lot of contamination issues.”

“We talk about the environment as a public health crisis,” Barragán continued. “When you talk to parents about their kids’ asthma and cancer rates, then they listen. Do we say the words ‘climate change’ a lot? No, because you have to talk to people about what strikes a chord with them.” Still, in her campaign, she has been emphasizing the connections between cutting air pollution, switching to renewable energy, and fighting climate change.

Hall declined a request from Grist for an interview, though his campaign did send information about his record of voting for pro-environment bills.

The fact that low-income communities and communities of color are disproportionately harmed by fossil fuel dependence is well-established, as is the fact that Latino and African-American voters are very supportive of climate action. But typically, while members of Congress who represent those communities have pro-environment voting records, they often have other signature issues — understandable, given their constituents’ material needs and the constant assaults on their civil rights and voting rights. That’s meant that leading climate hawks in Congress, from former Rep. Henry Waxman of California to Sens. Ed Markey of Massachusetts and Brian Schatz of Hawaii, have mostly been white. But that’s started to change in recent years, as climate hawks of color such as Reps. Ted Lieu of California and Raúl Grijalva of Arizona have become more visible.

And now the voters of California’s 44th district might send one more climate hawk of color to Congress. Environmentalists, for the most part, hope it’s Barragán. But, though Hall hasn’t been a climate champion from the get-go like Barragán, he could end up casting pro-climate votes in Congress. He seems to realize that climate advocacy is now a winning issue for Democrats in liberal congressional districts.