Hillary Clinton got one piece of good news this week: An increasing number of  young voters can tell her policies apart from Donald Trump’s.

For Clinton, that’s no small feat.

In July, Tom Steyer’s group NextGen Climate released the first battleground poll of millennial voters this election cycle. The takeaway was a startling number: roughly four out of 10 voters age 34 and younger saw no difference between the two candidates on the issues most important to them.

Now a new follow-up poll by NextGen Climate/Project New America in 11 swing states has found some improvement in Clinton’s numbers in just the month since the last poll was done. More see a difference between the two candidates:

Clinton also gained five points since July among likely millennial voters who say they intend to vote for her: 48 percent now back Clinton compared to 23 percent for Trump in a four-way race.

Her gains among Sanders’ most die-hard voters are worth looking at. Around the time of the Democratic National Convention in July, one in five millennials were still devoted Sanders supporters, and most of them didn’t see a difference between Clinton and Trump. Now, the Sanders holdouts have shrunk from 21 to 16 percent, and slightly fewer Sanders supporters still claim there’s no difference between the two major-party candidates.

While Clinton’s numbers have improved, Trump’s have stayed about the same, despite his repeated attempts to reboot his campaign.

“Millennials’ views of Donald Trump haven’t changed — but their awareness of the differences between Trump and Hillary Clinton on the issues has,” Jamison Foser, a strategic advisor to NextGen Climate, said in a statement. “Clinton’s lead has grown and favorability has increased as young voters learn more about the candidates’ policy positions, suggesting that as bad as things are for Trump, they can still get worse.”

The polling firm Global Strategy Group asked voters which candidate represents their views on issues like equal pay and debt-free college. Clinton pulls ahead on these issues and also has stronger favorability on climate-related questions — like moving away from fossil fuels to clean energy and protecting families’ health with clean air and water. 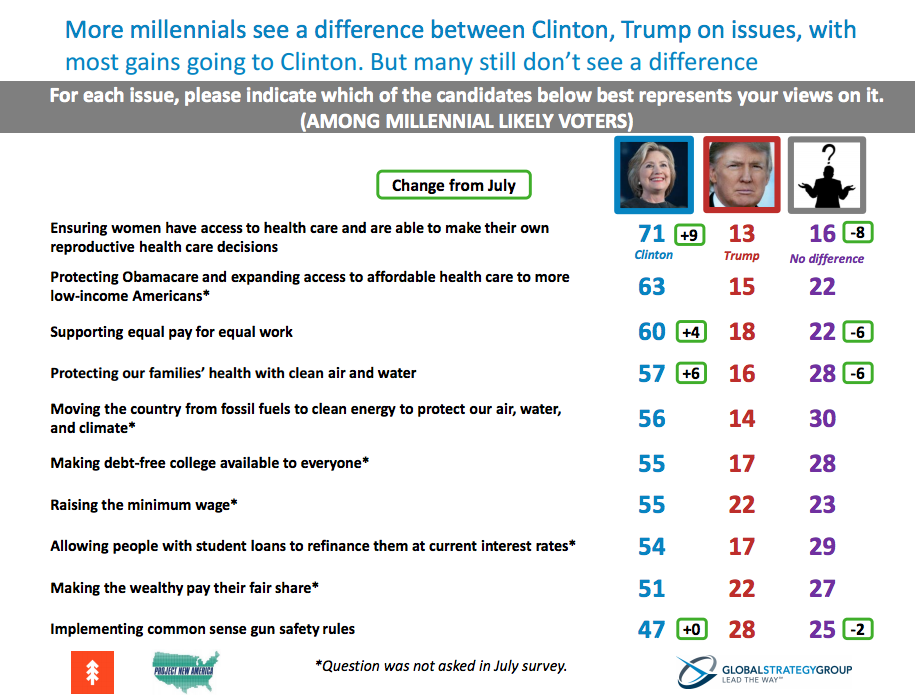 Still, 28 percent of likely voters see no difference between Clinton and Trump on protecting air and water and 30 percent don’t think there’s a difference on moving away from fossil fuels. That’s still a lot of voters who don’t see the point in choosing between the two.

Clinton at least has a few more millennial-whisperers working in her corner from now until Election Day. This weekend, Bernie Sanders and Elizabeth Warren will campaign in Ohio to convince this historically unreliable voter demographic that she’s their best bet.