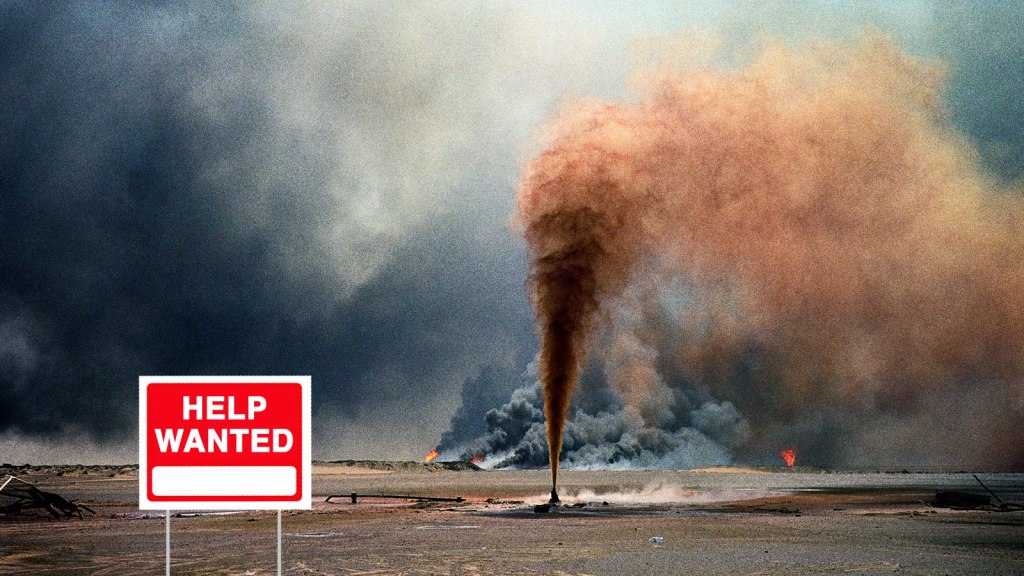 Even before the COVID-19 pandemic shook up the oil industry, America was full of defunct oil wells. Tens of thousands, if not hundreds of thousands, or perhaps millions of holes in the ground — no one knows how many there really are — abandoned by their former overseers when oil stopped gushing to the surface or when those overseers went broke. The holes leak methane, a powerful greenhouse gas that’s 86 times better at heating up the planet than CO2 in the short term, as well as other pollutants. In a world changed by the coronavirus, with bankruptcies among oil and gas producers rising, the problem is expected to get worse.

Earlier this week, a report from Resources for the Future, a nonprofit research institution, and Columbia University’s Center on Global Energy Policy asked whether there might be a joint solution to the economic crisis wrought by the pandemic and the ballooning problem of abandoned wells: a federally-funded jobs program that would put oil and gas workers back to work plugging up the holes. The program would be administered by the state-level regulatory bodies that currently oversee well-plugging.

It’s an attractive idea, and the authors are not the first to present it. Similar schemes have been simmering among state leaders, environmental groups, and liberal think tanks over the last few months; a version was proposed in an infrastructure bill that was passed by the House of Representatives in early July; and Canada recently dedicated $1.7 billion to such a program. But it’s not as simple as it sounds. The scale of the abandoned wells problem and the cost of doing something about it are wildly uncertain. The new report attempts to work within that uncertainty to show what a jobs program could reasonably accomplish, while also warning of the risks of having taxpayers pay to clean up the oil industry’s mess.

We know for certain there are at least 56,600 unplugged “orphaned” wells, those with no clear owner or responsible party, in the country. That’s the number that’s been reported to the Interstate Oil and Gas Compact Commission (IOGCC), an organization that represents oil and gas regulators, by its 31 member states. But many states also reported that they likely have hundreds of thousands more that were abandoned before any regulations were in place to account for them. Some date back to the 19th century.

Meanwhile, the Environmental Protection Agency (EPA) estimates there are more than 2 million unplugged abandoned wells, but they’re counting things a little differently. That number includes wells that are dormant and not yet sealed but have a clear owner. Today, oil and gas companies are responsible for plugging wells after they’re done using them under state and federal law. Governments typically collect a fee from the companies up front, a bond, to ensure there will be money on standby to cover the costs if the company goes bust. But states only collect a fraction of the necessary funds and have allowed companies to put off cleanup by “idling” their wells — putting them out of production, but not officially closing them up — indefinitely. In theory, the owner could start pumping them again or sell them off. In practice, they are holes in the ground, serving no purpose, and spewing methane.

The drop in oil demand due to the pandemic has exacerbated that pattern, with companies idling tens of thousands of wells in recent months. According to the financial think tank Carbon Tracker, the energy transition “may destroy any chance for the reactivation of these and hundreds of thousands more idle wells.”

While the problem seems to be at risk of spinning further out of control, the authors of the new report focus their proposed jobs program on tackling the known knowns — the 56,600 confirmed orphaned wells. States have reported plugging and remediation costs ranging from $4,000 to over $100,000 per well to the IOGCC. From that data, they estimated a total program cost of $1.4 billion to $2.7 billion — which would represent just a small slice of the several trillion dollar stimulus packages that have been coming out of Congress. They found that a program of that size could support about 13,500 jobs for one year (or fewer over several years). If instead lawmakers wanted to find and plug 500,000 wells, the report extrapolates a cost of $12 to $24 billion and a resulting 119,000 jobs.

If that sounds like a no-brainer, I regret to remind you that these cost estimates are wrought with doubt. The report notes that as demand for labor and equipment increases, costs could go up. Alternatively, they could come down as crews learn to plug wells more efficiently. Depending on which wells the program focuses on, the cost per well could be exponentially greater. Carbon Tracker found that the cost of plugging a newer shale well, which is typically thousands of feet deeper than older wells, could be anywhere from $300,000 to more than $1 million. Aside from costs, there’s concern that state regulatory offices don’t have the capacity to oversee a larger plugging program.

Perhaps worst of all, once taxpayers start spending billions to counteract the industry’s broken promises, why would an oil company expect to have to foot the bill ever again? The authors of the report recommend that any federal effort to plug abandoned wells focus on those older, truly orphaned wells to avoid this moral hazard problem, and potentially come with strings attached requiring states to figure out a way to make sure future plugging costs are fully covered by the industry.

But the merits of a smaller federal program would likely lie in the value of getting people back to work, with some positive side effects for the environment. The EPA estimates that unplugged wells emit about 280,000 metric tons of methane per year. Plugging 56,600 of the 2 million wells the EPA is accounting for would have immediate air quality benefits for nearby communities, but it would only eliminate about 7,400 metric tons of methane, or 3 percent of the problem. But since current estimates of the methane leaking from abandoned wells are also highly uncertain, it’s hard to say! If we’ve learned anything from this exercise, it’s that we need better data on all aspects of this problem.