On December 16, three 40 foot-long wind turbine blades were delivered via truck from a wind farm in Belfast to the Cork Institute of Technology in southern Ireland. For the next few months, civil engineers will subject the blades to a battery of tests as they design and build a pedestrian bridge that uses pieces of them to replace traditional steel girders. By April, the bridge will be complete, and the Cork County Council will pick it up and install it on a bicycle route connecting the towns of Youghal and Middletown.

If this experimental bridge is a success, it could be the first of many. Angela Nagle, a civil engineering Ph.D. student at the University College Cork who is investigating environmental, economic, and policy issues surrounding blade bridges, hopes to see dozens of them dotting the Irish countryside in the not-so-distant future. With 11,000 tons of blades expected to be decommissioned across Ireland by 2025, there should be no shortage of material to work with.

“What I’d love to do is turn it into a blade waste brokerage business,” Nagle said.

Nagle’s blades-to-bridges dream is part of an emerging effort to find creative ways to deal with blade waste, a fast-growing part of the overall waste stream that poses unique challenges. Because wind turbine blades are very large and sturdy, Nagle and her colleagues at the Re-Wind project are hoping they can be repurposed for electrical transmission towers, bridges, and more. Meanwhile, General Electric recently announced it has begun turning decommissioned wind turbine blades into cement, while scientists at the National Renewable Energy Laboratory are cooking up new materials that could make the blades of the future far more recyclable than today’s state of the art.

Taken together, these innovations — if they prove technically sound and economically viable — could help stave off a looming wind turbine blade waste crisis, something that Re-Wind team lead Larry Bank, a research faculty member at the Georgia Institute of Technology, describes as a “potential black eye” for the wind industry.

“If you are talking about a sustainable, renewable fuel source, it’s not appropriate to then pollute the environment with materials that are decommissioned,” Bank said.

[Solar panels are starting to die. What will we do with the megatons of toxic trash?]

Wind turbines are built to last about 20 years, and most of the turbines in existence have not reached the end of their lifespans yet. But blades often get taken out of service sooner as companies replace them with bigger ones that can produce more energy, a process known as “repowering.” And once old blades are no longer catching the wind, they have to go somewhere.

Unfortunately, in the U.S. and many other countries lacking blade waste regulations, somewhere often means a landfill, where wind turbine blades take up a huge — and growing — amount of space. According to the Electric Power Research Institute, blade sizes have “increased dramatically” in recent years, from an average diameter of 145 feet in 1997 to 367 feet in 2017. And the tough, fiber-reinforced plastics blades are made of don’t break down easily once they’re in the ground.

“They are very difficult to move around, and they are not biodegradable,” Bank said. “It’s like a big, hollow tube that takes up a tremendous amount of space.”

While industry groups will point out that the several million tons of blades projected to enter the U.S. waste stream in the coming decades are a small fraction of the total trash we produce each year, it still would be better for the environment and the climate if we could put these structures — which take a great deal of energy and resources to make — to another use.

Bank’s team is betting we can. Since 2016, Re-Wind, a collaboration among researchers in the U.S., the Republic of Ireland, and Northern Ireland that includes funding from all three governments, has been investigating the feasibility of repurposing blades for a variety of civil engineering projects. Within the next six months, the team expects to have its first two large-scale demonstrations out in the wild.

These include the pedestrian bridge in County Cork, as well as “Blade Pole,” a collaboration with an electric power company to repurpose wind blades as large, high-voltage electrical transmission towers. To test the idea, three decommissioned blades will be installed as power towers on a wind farm in Kansas next summer. While they won’t be connected to the electric grid in this initial trial run, Re-Wind engineers will be studying the durability of the structure to determine if the idea is sound.

“We’ve got all the theory and calculations, but of course, as engineers, we also want to make sure that this works before putting live wires on it,” Bank said.

The Re-Wind team has numerous other ideas it would like to test, including laying blades horizontally along stretches of coastlines to act as wake brakes and help prevent erosion, using them to build better noise barriers for highways, and separating the curved surfaces to use in skate parks, archways, or art installations. Old blades could even be installed underwater to serve as artificial reef scaffolds, perhaps in the same areas where offshore wind turbines are being built.

The group is particularly excited about the prospect of using old blades to construct affordable housing. “One of the first things we looked at was cutting up these blades into pieces that could be given for free or for very low cost to individuals in economically deprived neighborhoods that could be using them for construction,” Bank said, adding that the durability of turbine blades makes them an attractive building material in communities that are vulnerable to extreme weather.

Others, like General Electric, are using old turbine blades to cook up new materials. Last month, the renewable energy division of the conglomerate announced it had begun contracting recycling company Veolia North America to take blades from U.S. wind farms it is in the process of repowering, shred them up, and use them as a feedstock in cement kilns. 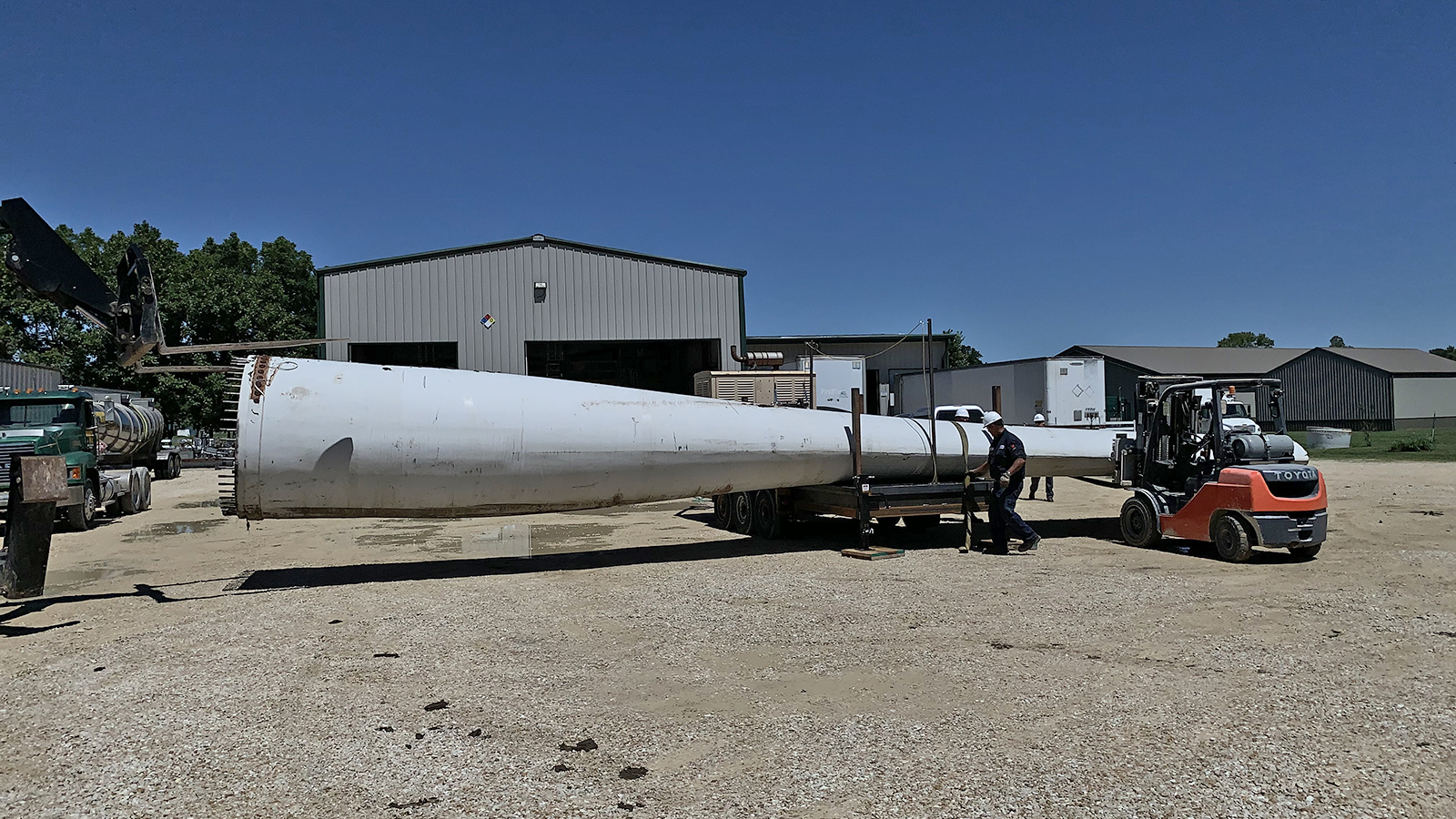 Using shredded blade waste to produce cement, a technique known as co-processing, was first deployed commercially in Europe about a decade ago. While a bit less glamorous than a skate park, proponents say this application could help solve another environmental challenge: the enormous climate impact of cement-making, which involves heating limestone to more than 2,700 degrees F in a furnace.

Typically, this is done by burning lots of coal.

GE estimates that by burning blades instead, the carbon emissions of cement production can be cut by 27 percent. According to a recent press release, GE plans to recycle “the majority of blades that are replaced during repowering efforts.” This fall, Veolia already processed more than 100.

GE declined to share its data demonstrating the climate benefits of its co-processing technique. But independent research led by Nagle has demonstrated that co-processing is more environmentally friendly than landfilling. However, because co-processing still produces emissions and essentially destroys high-quality construction materials, Nagle and Bank both stressed that repurposing is an even better choice when possible.

“Co-processing is the best thing that can be done with blade waste right now that’s viable,” Nagle said. But it is “definitely better to build bridges out of the blades.”

In the not-so-distant future, there might be another option: recovering the materials wind turbine blades are made of in order to manufacture new ones. This sort of material recycling also has a greater environmental impact than repurposing, but it could become an important waste management solution once large numbers of blades have deteriorated to the point that they can’t be repurposed.

However, today material recycling is difficult because most wind turbine blades are made using a “thermoset resin,” an ultra-sturdy plastic which is cured at high heat in a chemical process that can’t be reversed.

Berry and his team have spent the last five years investigating whether thermoset resins can be replaced with thermoplastics, a different type of polymer that can be melted down and reused. After constructing a 42-foot blade from thermoplastic resin and subjecting it to a battery of tests alongside a traditional thermoset blade, the results were encouraging: The two types of blades have very similar mechanical properties, according to a paper published in October in the journal Renewable Energy.

What’s more, because thermoplastic blades cure at room temperature, they are faster and, potentially, slightly cheaper to make.

While there are still research questions to explore, Berry said his team is now satisfied that thermoplastic resins could be used in blade manufacturing “because of the matching of the material properties” with thermoset resins. The next step, he says, will be for the wind industry to take what the laboratory has learned and apply it at scale.

And Berry expects that the wind industry will start doing just that in the next few years. While recyclability was “low on the list” of the wind industry’s priorities a decade ago, Berry says there has been a “sea change” since that time.

“Today, recyclability is something that is near the top of the list of concerns” for wind energy companies and blade manufacturers alike, Berry said. “All of these companies are saying, ‘We need to change what we’re doing, number one because it’s the right thing to do, number two because regulations might be coming down the road. Number three, because we’re a green industry and we want to remain a green industry.’”

FERC may finally help the public understand WTF it does