Try to remember the fanciest spread of desserts you’ve ever seen. Now picture what would happen if it sat outside in the summer heat for a couple of hours. Mousse would morph into ooze, tiered cakes would start to slip and slide, and delicate chocolate decorations would melt into unrecognizable blobs.

The truth is, you don’t have to imagine it — just watch The Great British Baking Show on Netflix, where creating elaborate baked goods in oppressive heat has become the main drama. The show, whose season finale appears on Friday for U.S. viewers, has always been filmed outdoors under an iconic white tent around England. But in 2020, a year from hell, the famously temperate British summer became too warm for the finicky process of baking. Heat is now the show’s central villain.

“It’s like Satan’s kitchen in here,” Laura Adlington, one of this year’s bakers, joked in an episode filmed in July. Following another sweat-inducing day in the tent, Paul Hollywood — the steely-eyed judge famous for his bread expertise — told his fellow co-hosts that he had to “peel his jeans off” at the end of the day. They winced and laughed uncomfortably.

The show conjures everything many Americans love about England — the rolling hills, the lilting accents, and the dry humor. The contestants are actually nice to each other for once, a relief after all the trash-talking you expect from American reality TV.

For millions of viewers, The Great British Bake Off (its U.K. title) has been a welcome retreat from reality. When the first season aired in 2010, its creators probably didn’t expect it would turn into a decade-long cultural phenomenon, let alone imagine the trouble posed by rising temperatures. The United Kingdom has been seeing frequent and unprecedented heat waves over the last decade. In Berkshire, where half of the seasons were filmed, the average maximum temperature in July has risen more than 1 degree C (nearly 2 degrees F) over the past several decades.

The producers attempted to give viewers a semblance of normalcy in a very strange year. No one wore masks on the show, and the pandemic remains out of sight; the cast and crew had to live on set and take regular COVID-19 tests so they could go on like normal. The nasal swabs were, of course, all off-camera.

The Great British Baking Show has encountered many temperature-related disasters in a decade-long run. Season 9 brought us Terry Hartill’s chocolate Eiffel Tower cake, which leaned, then toppled, in the heat. And no one could forget #BinGate from Season 5, one of the show’s biggest controversies. One baker had mistakenly taken another contestant’s baked Alaska out of the freezer, and in a fit of rage, Iain Watters, the baker who had been “sabotaged,” threw his melting creation in the bin and stalked out of the tent. Last year, for the first time — and in perhaps a subtle nod to global warming — contestants were given fans for their worktables.

The heat has become an increasingly familiar character. The camera pans over shot after shot of the searing sun. The judges explain an upcoming challenge, once again emphasizing that the heat will make it even more difficult. (Butter, the star ingredient of many baked goods, turns into liquid at 94 F [34 C], and starts to soften long before that.) To cool down during challenges, the bakers have started wearing wet rags around their necks that leave damp patches on their aprons. 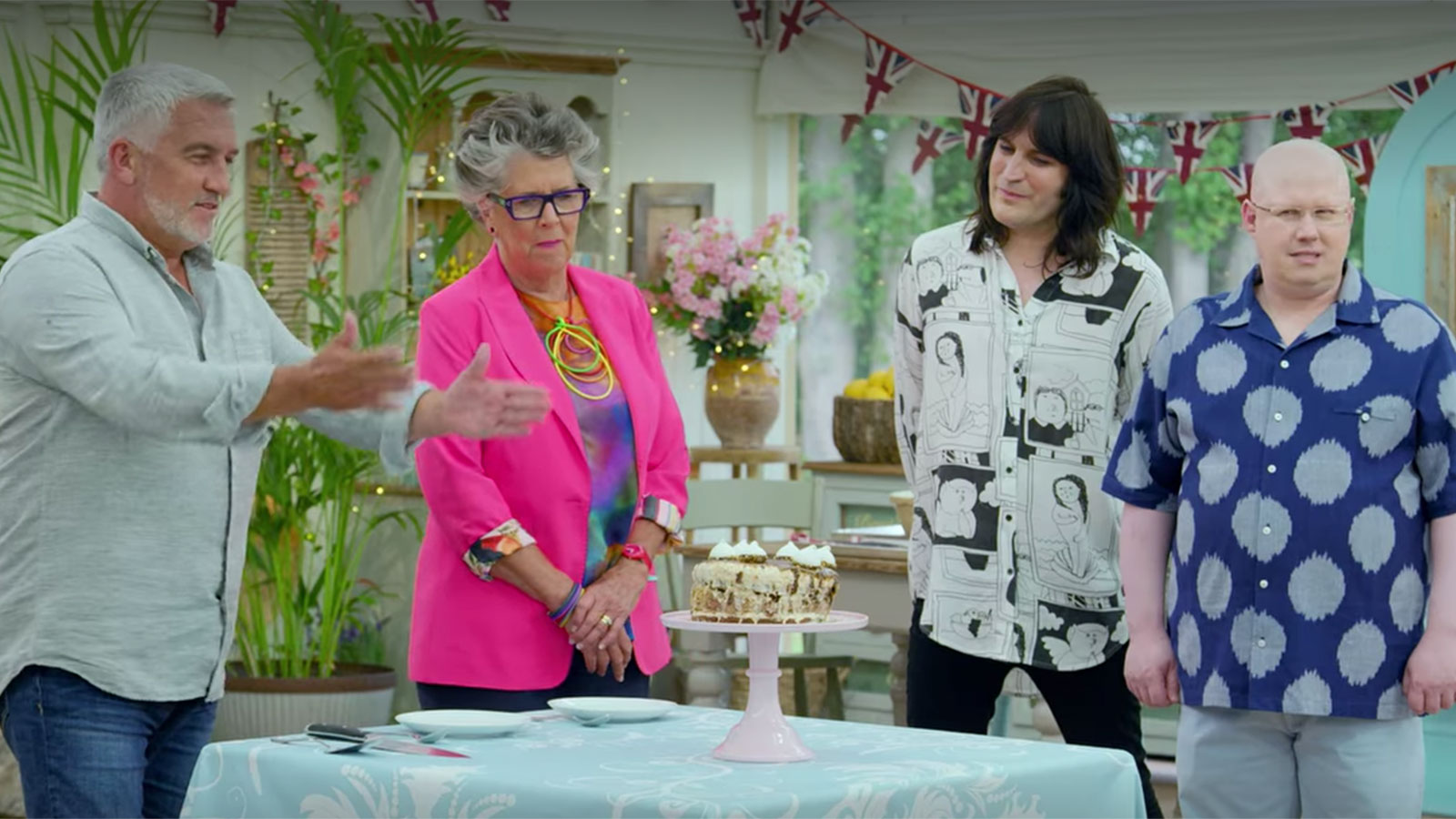 The most notable example of this was 1980s Week, an episode filmed this July that featured quiches, finger doughnuts, and ice cream cakes. (In the real 1980s — the decade when humanity almost solved climate change, but didn’t — the average global temperature was nearly 1 degree C [1.8 degrees F] cooler than it is today.) The doughnut challenge, filmed on the United Kingdom’s third hottest day on record, required contestants to deep-fry in near-100 degree F temperatures. Contestant Marc Elliott held up his candy thermometer at one point, and it registered 35.8 degrees C. “This is torture,” Adlington said. “Whose idea was this?”

The show often feels nostalgic for a different time and a different climate. The producers, Richard McKerrow and Anna Beattie, were inspired by traditional British baking competitions at rural village fêtes, elaborate outdoor festivals. The show is full of regionalisms, like Bakewell tarts, clotted cream, mince pies, and pastoral aesthetics. For one technical challenge this season, the funky, booze-loving judge Prue Leith selected a strange dessert the bakers had never heard of called Sussex pond pudding, a 17th-century creation where an entire lemon is encased in butter and sugar, wrapped in suet pastry, and steamed. “I mean, does anybody even eat this in 2020?” asked Hermine (no last name, just Hermine), one baker known for her love of French pâtisserie.

Some viewers have posited that the judges purposely set ice cream challenges in hot weather, though the judges mentioned in a recent episode that they don’t know the forecast when they make up the tests. Looking at Reddit, you’ll find different theories about why the show is filmed outside in such difficult conditions. Being at the mercy of the elements certainly creates drama, which is welcome on reality TV. There’s also the fact that the show is all about amateur bakers, and most people in the U.K. don’t have air conditioning. Across Europe, only 5 percent of households have A/C (or “air con,” as it’s known to Brits), though sales are on the rise.

During 1980s Week, Matt Lucas, the show’s new co-host, stood in front of the contestants to announce their next challenge. “Good afternoon, bakers,” Lucas said. “Welcome back to the hottest tent in the history of the world.” If The Great British Baking Show continues on like this for another decade, those words may prove prophetic. Nothing, save for the freezer, will rescue the bakers’ intricate chocolate accents and perilously warm ice cream concoctions from disaster.

What is the Indigenous landback movement — and can it help the climate?