California farmers: Drill, baby, drill (for water, that is) 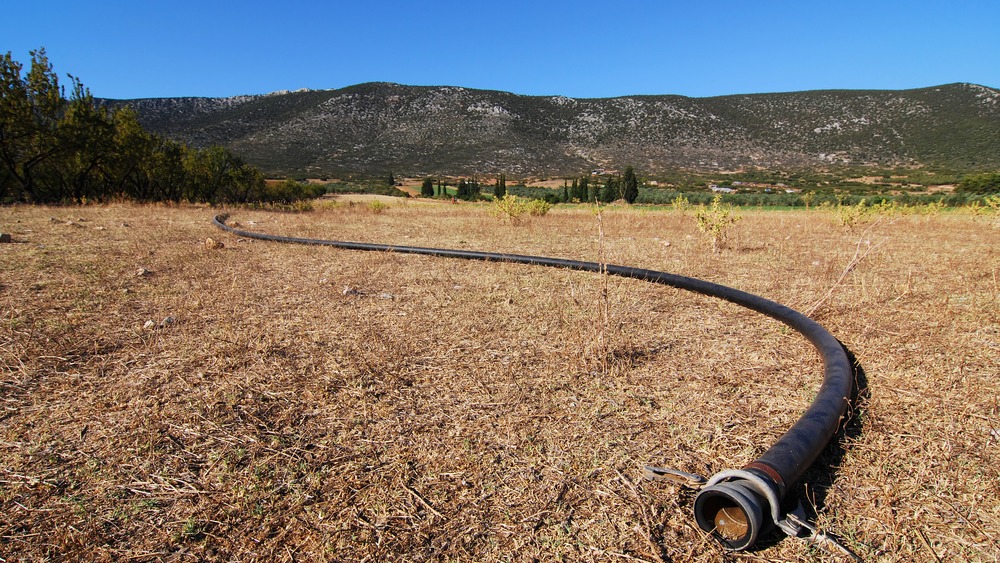 Shutterstock
There will be blood oranges

California farmers: Drill, baby, drill (for water, that is)

California is locked in an epochal drought — and yet produce aisles nationwide still brim with reasonably prices fruit and vegetables from the Golden State. How does California continue providing half of U.S.-grown vegetables under such parched conditions?

Peter Gleick, president of the Pacific Institute, one of the world’s leading think tanks on water issues, broke it down for me. He says that despite the drought, California farmers will likely idle only about a half million acres this year — less than 10 percent of normal plantings, which are about 8 million acres. And most of the fallowed land will involve “low-value” crops like cotton and alfalfa (used as a feed for the dairy and beef industries) — not the stuff you eat directly, like broccoli, lettuce, and almonds.

In the Central Valley — California’s most important growing region, which spans 450 miles along the center of the state — the drought is a massive inconvenience, but it hasn’t cut farms off from water. Under ideal conditions, the great bulk of irrigation water flows through an elaborate network of canals and aqueducts that divert water from rivers (largely fed by Sierra Nevada snowmelt) to farms.

But lately, because of the drought, those diversions have largely stopped. The main system for getting water to the regions farms, known as the Central Valley Project, “allotted farmers only 20 percent of their share last year — and none this year,” the San Jose Mercury News reports.

Known as “surface water,” because it’s drawn from aboveground sources like rivers and streams, this source of irrigation isn’t without controversy. Even in good precipitation years, California agriculture has gotten so ravenous for water that environmentalists charge that farms aren’t leaving enough to feed coastal ecosystems. The state’s once-prolific salmon run barely persists; the Sacramento-San Joaquin River Delta, a critical engine of biodiversity, stands at the edge of biological collapse.

But surface water at least represents the annual ebb and flow of water resources. To make up for it in down years, farmers turn to what is essentially a fossil resource: groundwater. This is the stuff that sits under land in aquifers, which store water that has leaked down from the surface for millennia.

There’s a financial metaphor that works here. To live off surface water is to live off your paycheck. When you get a raise, you can spend more. But when your paycheck drops, you have to cut back, economize. To rely on groundwater, though, is to live off of savings. Every draft you take is one that you won’t be able to replenish, at least not easily.

And in California, Gleick says, farmers drop wells to draw groundwater from under their land with little or no regulation — some counties have imposed quotas on withdrawals, but there’s no statewide policy. So the drought has sparked a veritable water-drilling frenzy in the Central Valley, especially in the southern part, called the San Joaquin Valley. This excellent San Jose Mercury News article show that in some ag-heavy counties in that region like Tulare and Fresno, the number of well permits granted annually doubled between 2011 and 2013.

The Mercury News piece shows how drilling begets drilling — a kind of hydrological arms race. When one farm drops a well and begins siphoning water, the water table drops, “forcing neighbors to drill ever deeper or risk going dry.” The piece also reiterates a point I made in my recent post on Wall Street’s push into buying up farmland: It’s not family-scale farms driving the well frenzy. Rather, it’s large companies dropping in monocrops of water-thirsty pistachio and almond groves to cash in on surging demand for nuts in Asia. The Mercury News points to a recent land deal by Trinitas Partners, a Silicon Valley-based private equity firm, to plow up 6,500 acres of “rugged eastern Stanislaus County land from grazing to almonds,” and a push by Paramount Farms, the globe’s largest almond and pistachio producer — owned by the bottled-water (Fiji) and pomegranate (POM Wonderful) magnates Stewart and Lynda Resnick — to convert 15,000 acres in Madera County from row crops to nuts.

Already, ecological damage is piling up. As I reported before, a 1,200-square-mile swath of the Central Valley — a landmass more than twice as large as Los Angeles — has been sinking by an average of 11 inches per year, a 2013 U.S. Geological Survey found. USGS hydrologist Michelle Sneed told me that and her team were “really shocked” when they realized the extent and scope of the subsidence, which they discovered by chance while they were working on a different project. And other areas of the Central Valley are likely sinking, too, she says. Such rapid sinking damages roads, railroad tracks, bridges, and pipelines, she adds. Then there the irrigation canals that, in good precipitation years, carry surface water to farms, decreasing the need for groundwater pumping. They’re the “most sensitive infrastructure to any elevation changes,” Sneed said, because they’re gravity-driven, engineered to carry water steadily downward, not traverse random ups and downs. And gnarled-up irrigation canals mean more pressure on farmers to revert to groundwater — causing yet more sinkage. Such damage is already happening on the ground — the Mercury News piece quotes a farmer complaining that sinking land is “damaging the irrigation pipes that deliver water to his farm.”

No one knows how long the region can withstand such massive water losses before its aquifers finally go dry. But they can’t go on forever. Gieick calls unmitigated pumping a “recipe for disaster.” Back in 2011, scientists from NASA and the University of California-Irvine, used satellite images to estimate the rate of withdrawal from the region’s water table. They were alarmed enough to warn of “potentially dire consequences for the economic and food security of the United States.” In February, the team released an update, finding that the withdrawal rate had accelerated dramatically since the previous study — hardly an encouraging sign.

So that’s how the Central Valley keeps cranking out food amid drought. The big growing region in the southern end of California, the Imperial Valley, is in a kind of permanent drought — that is to say, it’s a desert, Gleick of the Pacific Institute explained to me. It relies on irrigation water diverted from the once-mighty Colorado River, which snakes its way from the Rocky Mountains its namesake state through Utah, Nevada, California, Arizona, and finally to Mexico. Gleick says that the Imperial Valley, source of 80 percent of the winter vegetables consumed in the United States, got its full allotment of water from the Colorado this year — meaning that the drought had zero impact.

But the river doesn’t just make the California desert bloom to provide your winter salad. It also provides drinking water to 30 million people along its path, and also irrigates cropland in Arizona and Mexico. But that demand, along with a 14-year drought in the broader region, has reduced the river’s flow to a “murky brown trickle” in some places, the New York Times‘ Michael Wines reported in January. And climate change models suggest that the river’s flow will drop by as much as 45 percent by 2050. Because of a 1922 pact, California and its farms will get first dibs on this critical resource, often dubbed the “lifeblood of the Southwest,” as it declines. But even if that arrangement fills your salad bowl for the next few decades, the river’s troubles will trickle to the people and ecosystems that rely on it downstream.

None of which means you have to worry about where your next peach or kale bunch comes from, at least not anytime soon. Water doesn’t just flow downward; it also flows to powerful interests that have the political heft to command it, as California’s farming sector, increasingly moving under the thumb of large and well-heeled companies, certainly does.