It’s frightening to think about just how much edible food is wasted in the United States each year. Earlier this week, the Guardian reported that one-third of all foodstuffs — about 60 tons, worth $160 billion — is wasted by retailers and consumers every year.

(Unfortunately, those numbers concur with worldwide waste: On the global level, the U.N. Food and Agriculture Organization estimates that one-third of all food grown is lost or wasted, estimated at $3 trillion. To visualize it: That amount of food would cover all five New York boroughs, as well as Jersey City and Newark.)

But the unfathomable quantity of waste (according to the EPA, discarded food is the biggest single component of landfills and incinerators) isn’t made up of the lettuce that your family (and millions of others) forgot about, or the leftovers you never quite got to.

Food is wasted at all levels of production, well before it reaches your home.

To hedge risks of insects, blight, and weather — and to protect themselves against the fluctuation of supply and demand — growers often over-plant, which results in surplus crop and never-harvested fields.

And at harvest time, “vast quantities of fresh produce grown in the U.S. are left in the field to rot, fed to livestock, or hauled directly from the field to landfill, because of unrealistic and unyielding cosmetic standards,” according to the Guardian. “Ugly” vegetables are abandoned to save the expense and labor of harvesting them; blemished food that does make the cut might be left to rot in warehouses when grocers refuse to stock the shelves with imperfect produce because American shoppers refuse to buy it. It’s a messy, wasteful sequence that springs from the consumers’ desires. Ultimately, it does start with us.

Doug Rauch, former president of the Trader Joe’s Company, told the Atlantic that “grocery stores routinely trash produce for being the wrong shape or containing minor blemishes.” (Last year, the biggest supermarket in the U.K., Tesco, agreed to give away its unsold food after admitting to throwing away 30,000 tons of edible food.) Noticing this waste, Rauch founded The Daily Table, a grocery store in Dorchester, Mass. that sources food that other grocers don’t want and sells it for a discounted price.

Of course, there are circumstances that make all of this food waste possible — The Atlantic pegs the cheap price of food in the U.S. as compared to prices in the rest of the world as a primary reason. And yet, writer Adam Chandler hypothesizes that “the great American squandering of produce appears to be a cultural dynamic as well, enabled in large part by a national obsession with the aesthetic quality of food.” The problem is deeply entwined in our economy and our culture (could our endless Instagrams of perfect farmers market produce and our desire to always have the best of everything, especially when it comes to food, have a role here?). It’s hard to isolate and it’s bigger and more complicated than the apple peels I throw in the compost bin when I’m making pie. 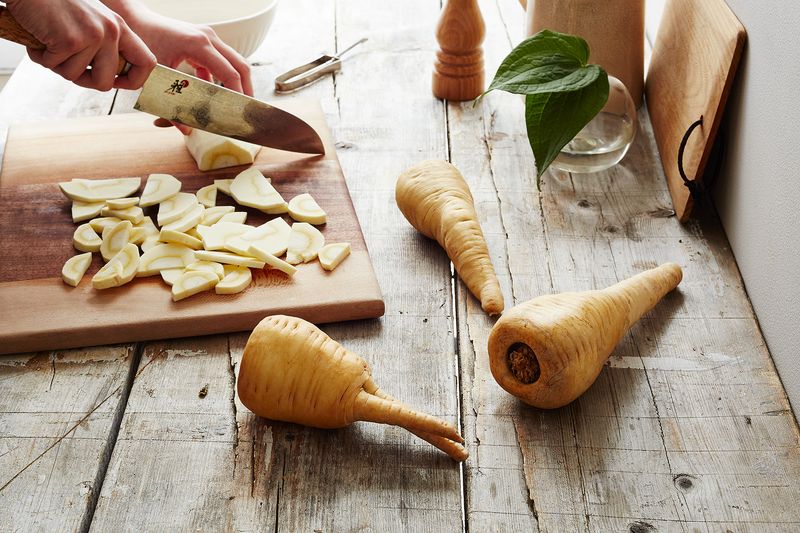 This is not to exempt me from saving my radish tops or making sure even not-so-great tomatoes find a good home in a savory cobbler. But it is to say that, even if these little things help, there is more to be done: We can support companies — like The Daily Table, San Francisco’s Imperfect Produce, or Baltimore-based Hungry Harvest — that recover food that would otherwise be wasted; we can go to farmers markets and buy the knobby peppers to let the growers know we still want them; and we can support chefs like Dan Barber, Tom Colicchio, Roy Choi, and Daniel Patterson, who are making the food waste conversation a popular news item.

So yes, when you’re cooking, don’t throw away your cauliflower stems. But when you’re shopping, buy the darker-hued heads — they’re perfectly fine.

To read more about where food waste happens: