The pesticide chlorpyrifos, used on farms and golf courses, is riskier than previously suspected, the Environmental Protection Agency says, and it’s proposing new restrictions on the stuff.

Farmworkers are most at risk, according to an EPA press release:

This assessment shows some risks to workers who mix, load and apply chlorpyrifos pesticide products. When used in large amounts, chlorpyrifos has the potential to pose risks in limited geographic areas when drinking water from small watersheds.

But chlorpyrifos is probably not a risk to you. That is, there are already controls for the chemical wafting into the air, or sticking to food, according to the EPA:

There were no additional risks from pesticide exposures in food or exposures to bystanders and workers from airborne chlorpyrifos. The latest USDA pesticide residue data show no concerns for chlorpyrifos in food, with the pesticide detected in less than 1% of samples.

The EPA set its limits for this chlorpyrifos residue in food at one part per million. In routine testing, officials have found the chemical in a small number of samples, but in far tinier amounts — at .002 parts per million. To protect children, the EPA sets its limits for pesticide residues 10 times lower than levels shown to be hazardous.

Chlorpyrifos was introduced in 1965. Some pesticides kill insects but are harmless to humans; chlorpyrifos is not among those. At high doses it can kill people, and it has. It can take up to 120 days to break down in soil. It can hurt birds and fish and … basically it’s the kind of pesticide we need to handle gingerly. 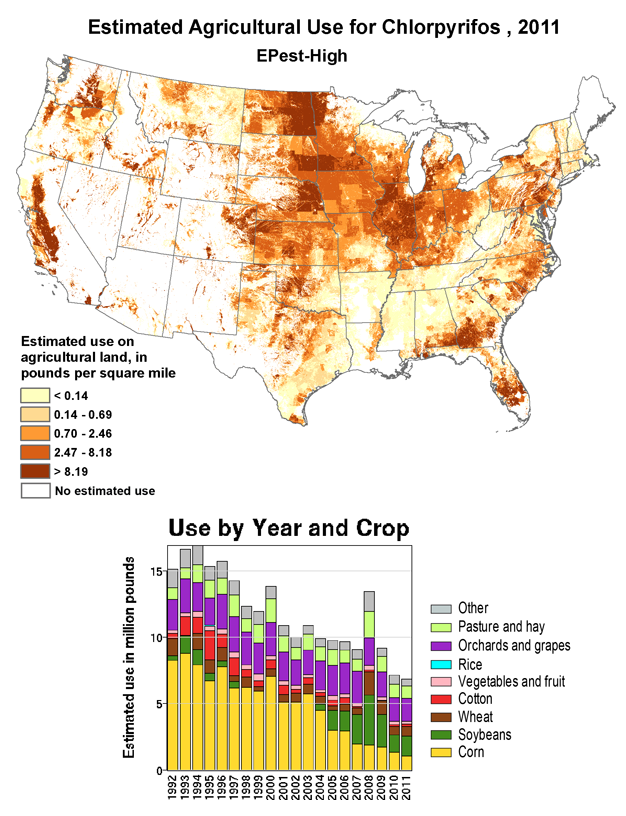 Overall use of chlorpyrifos is on the decline: The amount people are applying each year has dropped more than half since the early 1990s, according to the U.S. Geological Survey.

The EPA is still reviewing the pesticide and may recommend further restrictions in the future.