Everyone knows that obesity, type 2 diabetes, and the other diet-related diseases are shortening lives and draining public coffers, right? But nobody knows the formula to stop them. And so there are a lot of people watching the city of Berkeley to see if its new tax on sugar-sweetened beverages can make a dent.

Voters passed the tax just last November, so it’s far too soon to tell if it’s having any impact on health. But we can, even at this point, fact-check a couple of predictions that were making the rounds before the vote.

During the political campaign, the group opposing the tax suggested that Berkeley wouldn’t actually spend the money it raised on health programs, and that stores wouldn’t actually increase the price of soda. Let’s look at what has actually happened so far.

Is the money really going to health and nutrition programs? Yes.

Those opposing the tax suggested that the city was cynically using it as a way to grab more money. For instance: “Measure D is written so that the City Council can spend the tax revenue on anything they want.”

But, instead of funneling the tax money into Caribbean vacations for public employee unions, the money is, indeed, going to public health education. The city council appointed a commission to figure out what to do with the money, and it recently voted (unanimously) to give $250,000 to the school district for nutrition education.

That commission is mostly made up of community advocates who got involved during the campaign; only one member is a nutrition researcher: Pat Crawford, director of the Atkins Center for Weight and Health at UC Berkeley. That concerned me. For Berkeley to make a good test case, it would have to employ the best, evidence-based interventions. But Holly Scheider, another member of that commission, said that there were sound reasons behind the commission’s makeup. It’s important to have a scientist on board, like Crawford, she said, but it’s also important to have people who understand what will work in their communities.

“From the beginning we embraced communities of color, which are at the highest risk of developing obesity and diabetes, and understood the importance of bringing them into the leadership and decision-making process,” Scheider said.

Scheider said she expected that the rest of the money would go to programs zeroing in on the people most at risk of developing diet-related disease. But because 1-in-3 children are overweight, “we also wanted something broad that would catch all those kids. The school program does that.”

Are stores passing on the tax in the price of drinks? Some are; some aren’t, yet.

The tax will be most effective if — in addition to providing money for programs — it also raises prices and discourages people from buying the least healthy drinks. But Berkeley didn’t tax consumers directly; instead, it taxed beverage distributors. (There are several reasons for this — the most important one is that sales tax is capped at 9.5 percent in California, and Berkeley had already maxed that out.) The idea was that distributors would pass the tax on to the stores, which would then pass it on to the people buying drinks.

When Contra Costa Times columnist Tom Barnidge checked a couple of stores to see if they were charging more for sodas, it looked to him like the predictions of opponents had come true. But when I checked a few weeks later, it was clear that several stores had boosted prices. You can see it clearly in this photo: 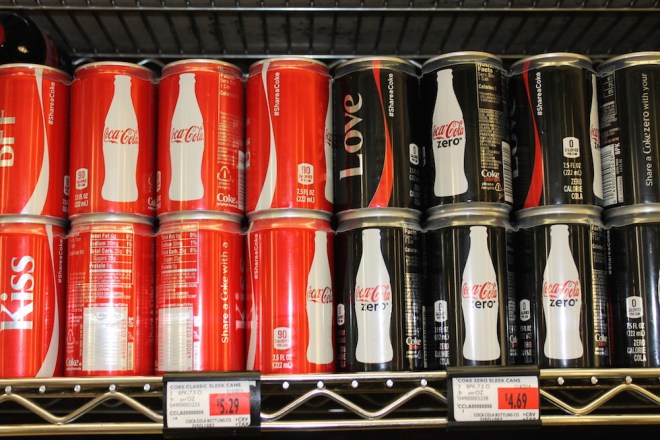 The sugar-sweetened Coke is 60 cents more than the diet Coke. That’s 7.5 ounces x 8 cans x 1 cent tax per ounce = 60 cents. Safeway and Andronicos (a local grocery chain) are passing on the tax in this way. Another store, The Dollar Tree, has simply stopped selling sodas. But other sellers, including drug stores, are still on the fence. I didn’t see any difference in prices at CVS. Barnidge talked to a store manager:

It appears that some retailers are simply eating the tax while trying to figure out what to do. Others, like Safeway, may have just needed some time to adjust their system.

The campaign rhetoric didn’t invoke the travails of beverage distributors, but since the tax passed they have been saying it’s giving them major headaches. I talked to one distributor who spoke on background (the company has a policy against talking on the record, so that it doesn’t get singled out for opprobrium). Distributors typically use an inventory-management program to track where everything is going — and the tax throws a monkey-wrench into the works. It requires a lot of manual adjustment when the stores in one city get a different price from everyone else.

The distributors pass the tax on to retailers, so it doesn’t cost them anything, but the extra regulation does cost them in labor — so much so that some of the smaller distributors may simply stop delivering sugary beverages to Berkeley. Anti-obesity advocates might cheer that development, but tying small businesses up in red tape is a rough way to solve a problem. And of course, it won’t halt the flow of soda, because the big companies have distributors in house. (I called a Coke distribution center in the Bay Area, but they referred me back to corporate headquarters, which didn’t respond to my query.)

Is one cent an ounce really enough to make people switch to the diet version (or something healthier)? Will people just buy soda across city lines and bring it back to Berkeley? And supposing the price increase, or the education, works, and people change their behavior: How much will it improve public health?

The whole thing is a big open-air experiment. UC Berkeley public health researchers are taking advantage of the way that experiment is unfolding in their backyard: A team of researchers is collecting data to see if the city is able to budge the intractable problem of dietary disease. But we’ll have to wait to see what they can learn.