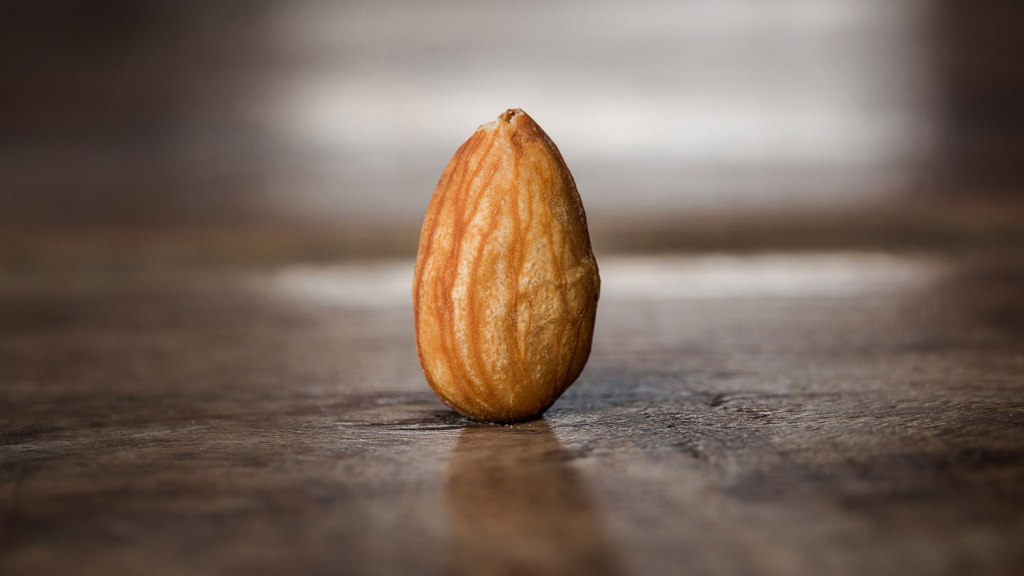 Almonds have become the poster-nut for human wastefulness in California’s drought. If you’ve been paying attention to the drought coverage, you’ve already seen the statistics repeated over and over: It takes a gallon of water to grow an almond, and almond orchards comprise 10 percent of our water consumption.

And I get it. I live in California, and it’s a little freaky right now. We’ve entered uncharted territory: Never in recorded history have we gotten this dry. There’s an innate urge to seek out a villain — you know, put up the bat signal, catch the bad guy, and live happily ever after.

The first problem with this reasoning, as Alissa Walker points out in this piece, is that it’s arbitrary. Almonds (“THE DEVIL’S NUT” as she has it) are nowhere near the most water-hungry crop — in fact many farmers have switched to almonds from cotton, which requires slightly more water. But the second, and to my mind more serious, problem with demonizing almonds is that it does nothing to fix our water crisis.

Pointing the blame at any single crop is just too reductive. When dealing with a complex system like California’s water cycle, you have to think holistically if you hope to make positive change. While the system is complex, there’s something very simple driving California’s water system off the rails: stupid laws.

The laws that govern water in the West are byzantine and hidebound. They make water nearly free for some people and expensive for others. And then there’s the fact that are no rules on groundwater — whoever grabs it, gets it. This has disconnected the price of water from reality. The best fix would be a comprehensive overhaul of the laws to make the price of water clear and responsive to scarcity.

If the price of water moved according to the laws of supply and demand, ecological limits would provoke change. When there was a drought, the price of water would go up and farmers would install efficient irrigation, rather than flooding their furrows. Or, when water grew scarce and costly, thirstier crops would become less profitable, and farmers would turn to more efficient foods. If, as Tom Philpott suggests, it makes more sense to grow fruits and vegetables in the water-rich Midwest, the price of water would naturally move farms from California to Iowa.

Actually, California has already started down the path of water-law reform, albeit ploddingly. The state finally passed a law to regulate groundwater last year, but it will take 20 years to get to the point where the amount of water going into the ground is equal to the amount we’re taking out. We’re moving (very slowly) in the right direction.

Almonds are just the most visible symptom of our insane system. Joaquin Palomino, a journalist who has done some of the best reporting on almonds, explained to me that during a drought it makes more sense for farmers to plant the nuts. That’s because they are a high-value crop. If you are growing cotton or corn, margins are slim and bankers will be hesitant to lend you the money you need to sink a newer, deeper well. But if you plant that same land with almond trees, all of a sudden you are sitting on a big investment with the potential for a big payoff, and the banker will see the cost of a new well as insignificant.

Under California’s upside-down water regime, drought and receding groundwater is actually driving farmers to plant more almonds. That’s a bad thing, but not because almonds are evil; it’s bad because it’s putting lots of farmers — and the rest of the state by extension — in a precarious position. Almond trees often take 15 years to break even, and if they go without water for one dry month, they die.

Almond farmers aren’t the problem; they’re just acting out of common sense, following market signals. It’s those market signals — warped complex water laws in some cases, and no rules at all in others — that we need to fix.

As I said at the top, it feels a little freaky to be living in California right now, but I actually welcome the drought. It’s not going to force us into Dune-style stillsuits, but it is going to force us to grapple with the stupidity of our system. As New York Times columnist Eduardo Porter wrote: “One thing to keep in mind is that the state still has plenty of water. It just doesn’t have enough for every possible use, no matter how inefficient and wasteful.”

Let’s fix the laws that give water away. That would do infinitely more than worrying about almonds.