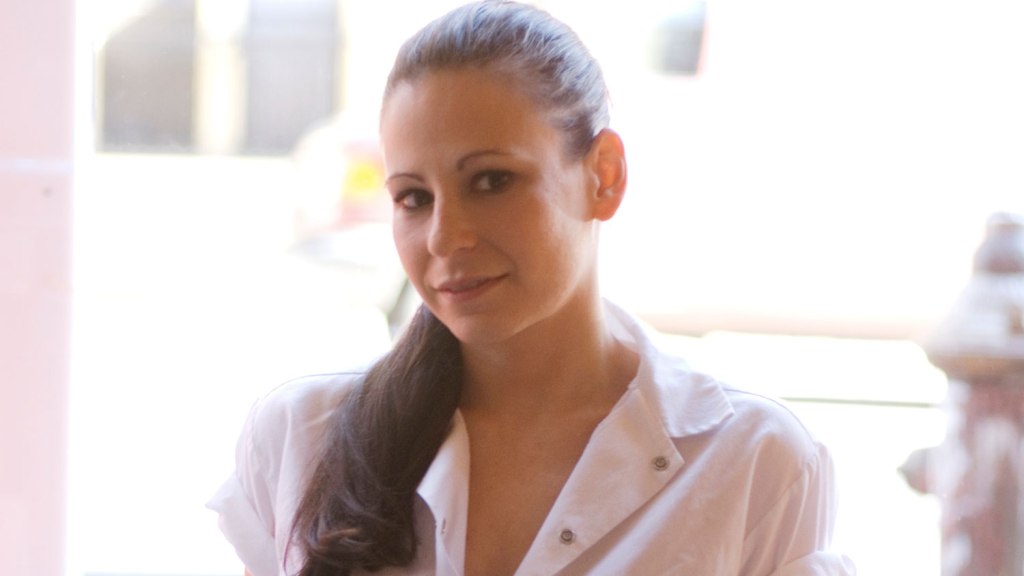 Amanda Cohen may be a vegetarian chef, but you would be sorely mistaken if you think the cuisine at her New York City restaurant, Dirt Candy, falls into the patchouli-laden, cooked-by-the-lunar-cycles, steamed-brown-rice variety of vegetarian fare.

To Cohen, herbivorous cooking isn’t a political slap in the face against meat-eating (she eats fish) or even a movement rooted in health consciousness (rest assured, there will be butter and cream aplenty). Her food simply celebrates vegetables, elevating them from an afterthought side dish into a high-end entrée. One of her greatest hits is a portobello mushroom mousse — her spin on foie gras, which won first place and $10,000 in PETA’s Fine Faux Gras Challenge. (You can peep the recipe here.) Cohen’s other accolades: She’s the first vegetarian chef in 17 years to earn two stars from The New York Times, the first vegetarian chef to compete on Iron Chef, and she operates one of the few Michelin-recommended vegetarian restaurants in the country.

Cohen’s an outspoken voice in the restaurant industry, too. She eliminated tipping at her restaurant’s new Lower East Side location, opting instead for a 20 percent administrative fee that gets distributed evenly amongst her entire staff. Cohen is also vocal about the discrepancies between female chefs and their male counterparts. Men are still more likely than women to hold head chef positions, and the median pay for female chefs is about 83 percent of what male head chefs make. All in all Cohen would like to help create a more equitable food system.

Grist spoke to Cohen about keeping women in the kitchen and why vegetables are the new bacon. Here’s what we learned from the rising star:

As chefs keep swapping tenderloins for turnips, vegetables are on their way to becoming the next big food trend — and we’re not just talking kale salads. “In the past with vegetarian restaurants, you only went there if you had to, not because you wanted to,” says Cohen. “[I]t’s only been until recently that chefs have really started caring about vegetables on the plate. For years, you went out and if you were a vegetarian and went to a more mainstream restaurant, you’d get a bunch of sides that in general weren’t really interesting. Vegetables are something you can have a lot of fun with. It really is like we’re in the Wild West. There are no rules — and if there are rules, we’re breaking them down.”

By ditching tipping and adding the 20 percent administrative fee on each check, Cohen is ensuring that the front of house (managers, servers) and back of house (sous chefs, dishwashers) are paid comparable wages. “I believe people should come to work and get paid at least a living wage,” Cohen says. “There are good nights and bad nights and sometimes you have to have bad weeks before you have a good week again. It’s my job to make sure that they can live decently.”

Male chefs spend way more time in the spotlight than their female counterparts.

Although women make up the bulk of the food service industry, men are more likely to become head chefs — and more likely to wind up on “Best Chef” lists. Says Cohen: “It’s sort of a never-ending circle. When we don’t get written about, investors don’t hear about us. When investors don’t hear about us, instead of investing in women chefs, they invest in the male chefs that they’re hearing about. Male chefs tend to get the opportunity to run restaurants that could potentially get two or three or four stars, or more Michelin stars. That’s going to get them more money, that’s going to put their name in the paper more. They’re going to get more investors. The cycle never ends because women are being left out of this discussion entirely. We’re sort of stuck.”

Women shouldn’t have to make a choice between being a chef and being a mother.

“There are a huge number of women who have passed through culinary schools, and what happens is that they get to a point in their careers where they really do have to make a choice,” says Cohen. “‘Do I stick with it, can I balance this with a kid, or do I leave and come back to it but maybe in a really different part of the industry?’” She thinks the restaurant industry needs to make some institutional changes. “This is an industry problem. Do we start offering — and I mean we should — maternity leave, health benefits? How do we start incorporating that so we’re not losing this talent pool?”

Cohen’s advice for at-home or amateur chefs: Play with textures. It’s OK to mess up. Throw out some of the old cooking methods. “At Dirt Candy, we make mistakes every single day and it takes us a month or two months for us to get a recipe right,” she says. “In terms of strictly cooking, throw out everything you know. For years, the recommended temperature for cooking vegetables was 25 minutes at 350 degrees. You’re not doing the vegetable any favors there. Let’s make it more exciting and turn the oven down and cook it for a couple of hours and really start to caramelize the sugars in it and break down the vegetable. Or, put it in the oven for 10 minutes at 450 degrees and get a really crispy outside and a juicy inside. Treat your vegetables with the same respect that you would treat a piece of meat.”