For five years, photographer Audra Mulkern has been documenting farmers, farms, and local markets. She could often be found wandering through rows of fresh vegetables and herbs at her local farmers’ market in Duvall, Wash., taking careful snapshots of the produce on her cellphone. She recalls moments when farmers would look at her, eyebrows raised, and inquire, “Are you taking pictures of my vegetables?”

After publishing the photos of local produce in her first book, Rooted in the Valley: The Art and Color at the Snoqualmie Farmers’ Markets, Mulkern began photographing women farmers in her local area, posting their photos and stories on her photography blog. A year ago, she launched the Female Farmer Project, designed to show the rise of women in farming.

And they are rising: While women make up just 14 percent of farmers in the U.S., they are the fastest growing demographic in American ag. Mulkern, 45, who spoke with me last week, wants to introduce us to them. 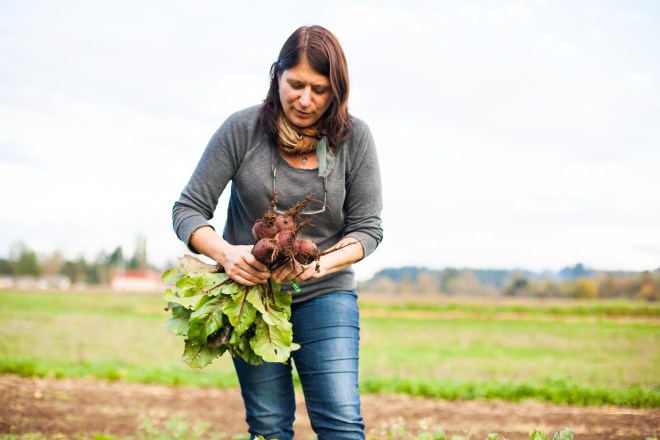 Q. So what is the Female Farmer Project? And what drives your interest in it?

A. I often say that it’s to document the rise of women in agriculture, But I think that it has a lot of layers. It’s intended to reframe peoples’ preconceived ideas of who grows their food, and to show the women who are turning farming into a tool to feed their communities.

It’s intriguing how women balance farming with their family. I think 54 or 56 percent of women who farm also have outside employment, plus a family. I don’t think people realize that, so I wanted to shine a light on what they’re doing. The women that inspire this project work behind the scenes to make sure that their vegetables get to disadvantaged schools — so many are addressing issues of poverty, and nobody knows!

So that’s my inner drive. I want people to see that when you go to the farmers market and the farmers are standing there behind a table of Swiss chard, that there is so much behind that table. I’m hoping that when they read these stories, they will stick their hands out to meet those farmers and get to know them.

Q. How did the project get started?

A. I call myself a farm groupie. I volunteer at half a dozen farms, all in Duvall. So many farmers at those markets are here in my valley, most of them. So they’re my neighbors and my friends. A few years ago, I started taking pictures at the farmers market, I documented an entire season, and after a while, I started asking farmers why they come to the market: Isn’t it too much work?

At the end of that season, I decided to do a little book that my neighbors could buy or use as a Christmas gift or put in coffee shops — just little short essays about why farmers come to market. What I didn’t expect or anticipate is that it would become hugely popular.

This was all sort of at the beginning of the farm-to-table movement. And I didn’t really know what I wanted to talk about in my next project, so I kept going to markets and visiting with the farmers. After a while, I started to realize that all of the farmer interns at the farms I visited one summer were female. When I asked if any males had even applied, and they said it was 100 percent women.

I started stewing on that, taking that anecdotal evidence, and in the process of investigating, I noticed that most of the farmers in my valley are women — in fact, the first farmer in the valley was a woman and she’s still here. I thought, there’s a story that needs to be told. 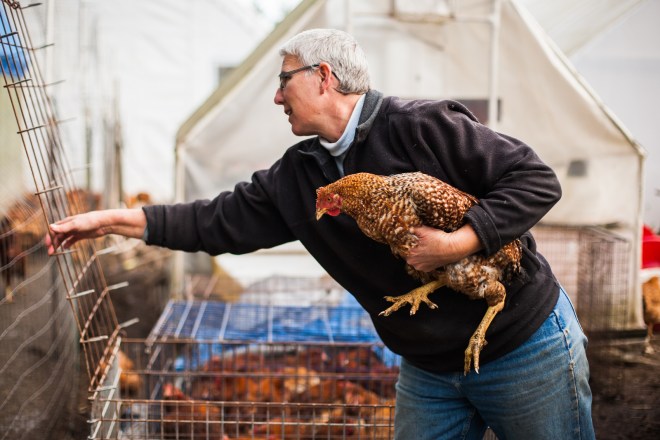 Q. You picked up photography relatively recently, but I sure wouldn’t have guessed it. The photographs are all so beautiful.

Q. Is it important to you that the photos are unedited?

A. It’s important to me that’s it’s not glamorous. Farming can’t be glamorized — people have to know the true cost of their food, the true price of what they eat.

Q. So, why tell these stories?

A. I’m in awe of the work that they put in. I feel like somebody needs to really tell these stories. For too long, they’ve been ignored by the media and the government census. Only 14 percent of farms are operated by women. It’s interesting that there’s so much discussion about food and the food movement, but farmers have been left out of the conversation, and women are nowhere near it.

Q. I noticed that quite a few women you interviewed chose farming as a second career. What do you think attracts women to the work?

A. One of the women I interviewed in New York was a former corporate litigation attorney. She was very highly trained and educated, and at some point she realized that it was not fulfilling her in a way she expected, so she decided to make a change. Now she’s a farm manager at a rooftop farm in Brooklyn.

There are former journalists, former attorneys, former software engineers — some of them literally dropped out of the corporate world. Others eased their way into it, built small farms through their own model. These women are highly educated, and are bringing those skills into the business of farming.

Q. There are so many statistics showing farmers are aging out, and not as many young people are entering the field. How do you stay optimistic?

A. The statistics tell a different story, but my anecdotal evidence gives me hope. Again, over and over, I see women who are coming from other careers. They’re developing cool ideas about how to diversify farms in the future. Women tend to do more polyculture farming methods, versus a monoculture, which you see on larger Midwest farms.

Another thing about these women is that many have, in turn, educated other women. On many of the farms that I visited, the women interns outnumber the men. One farmer here in Duvall has started 10 other farms by incubating them off of her farm. Whether it’s teaching them to raise chickens or the ways of flower farming, women who farm don’t just farm — they train other women. 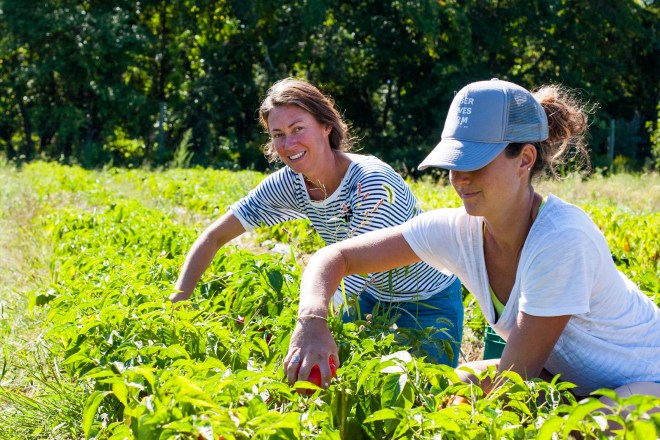 Q. Has this project changed the way you eat and see food?

A. I am very conscious about using everything, from roots to top. I’m trying to use the whole vegetable or the whole animal. It wasn’t until I started spending time at farms that the lightbulb came on about water consumption and how much we waste it. I’m learning ways to keep my footprint small.

Q. If you could, would you be a farmer?

A. I’m too lazy to be a farmer. But I’m an invested gardener!

Q. What do you admire most about these women?

A. In my whole generation, farming has been the missing piece: We didn’t learn to can, we didn’t inherit the farms, and our mothers took advantaged of the boxed, frozen dinners. But there’s been this renaissance of taking food back to the start, to the growing of it …

I haven’t met an unhappy farmer yet. They work extraordinary hours, they can’t go on vacation, but they’re happy. There’s something behind that. I find it curious that farming has become a way that women have empowered themselves, but they have also created a way to address food insecurity, food justice, and poverty issues.

These women are elevating the practice of farming, and using their ability to nurture, and turning that into a tool to farm and feed their communities. It is an extraordinary thing.