For at least the last century, we’ve seen fewer farmers using more labor-saving tools to produce more food. This should be no surprise — just about every field works this way. And yet I was surprised when I saw this video from Bloomberg on robots feeding, milking, and cleaning dairy cows. 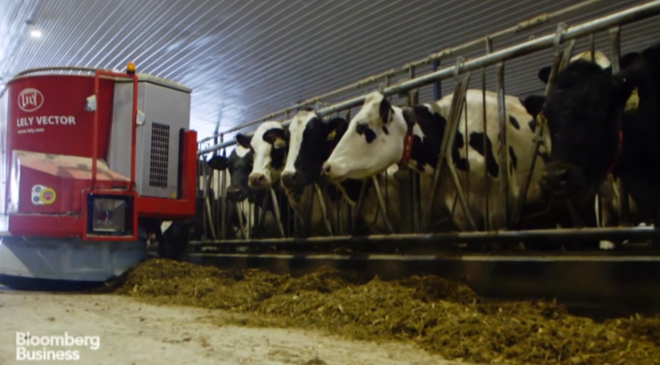 The Lely Vector can feed cows all day and all night.

It’s not too hard to imagine a future where every task on a farm is handled by robots. You’d need workers to maintain the robotics, and managers to make financial, agronomic, and strategy decisions, but that’s about it.

Lely says this is a good thing: Right now the majority of workers on dairy farms are low-income immigrant laborers. The work is hard, dirty, and sometimes dangerous. Doesn’t it make more sense to turn it over to machines?

Still, with every change something is lost as well as gained. As Lucas Sjostrom wrote in the trade journal Dairy Herd Management:

If we have machines to get the cows, milk the cows, monitor for heats, and cameras to watch the calving process without human intervention, we’re talking about a dairy industry with much less human-to-cow contact time. Based on most dairy producers I know, that is a sad day, whether it is due to automation or employee management that takes them away from the herd.

But in the end Sjostrom concludes that automation is good for the cows:

We say cows like prediction and routine; robots provide both. Humans are too unpredictable. Walk onto any robotic milking farm that’s been running for a few years and you’ll instantly notice how calm the animals are.

The Lely milking machine collects 120 data points about each cow every time she enters the machine. It can often identify sick animals before a farmer notices there’s anything wrong, according to Steve Fried, Lely’s North American sales manager.

But is this good for the farmers? I asked a couple of dairy farmers about robots, and they were enthusiastic, though both said they couldn’t afford them. The price varies, depending on a bunch of factors, but the system needed to run a milking robot is between $180,000 and $200,000, said Fried. On a big dairy operation with many laborers, he said, the machines end up being a better deal than paying workers after about five years. In the long run, wide adoption of such technology would mean fewer people working in agriculture. 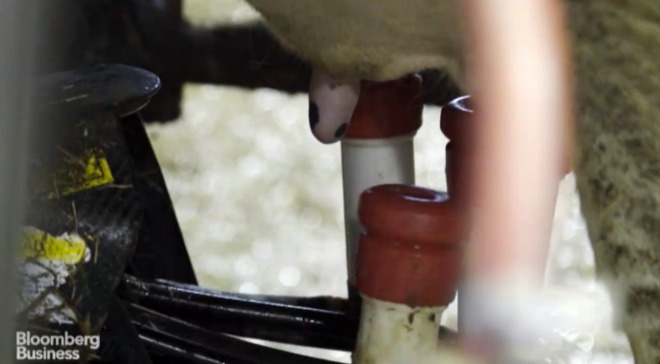 At least, there will be fewer low-income laborers working on commodity farms (that is, farms that produce milk as plain old milk). On the other hand, there will probably be more and more farmers offering something special — farms that charge a little more for creating both food and pastoral beauty, or farms that sell especially delicious food at a premium.

Fried told me that much of the interest in the Lely robots comes from the next generation of family farmers. “The kids don’t want to milk like their parents did. They want to have more of a normal lifestyle where they can be able to go to that soccer game in the evening rather than running home to milk the cows. It’s bringing young people back to the farm.”

The real trend here is that farmers are working less with their hands and more with their heads. This does mean fewer farmers. But it could also give the remaining farmers more time to think about how to improve the quality of their products and the stewardship of their land.