For years, the only produce that thrived indoors — and made money doing so — was cannabis. The leafy, THC-producing plant grew happily in fraternity basements and the back rooms of Colorado shops under harsh, inexpensive halogen bulbs. Under the same lamps, more heat-sensitive leafy greens, like lettuces and sprouts, withered. 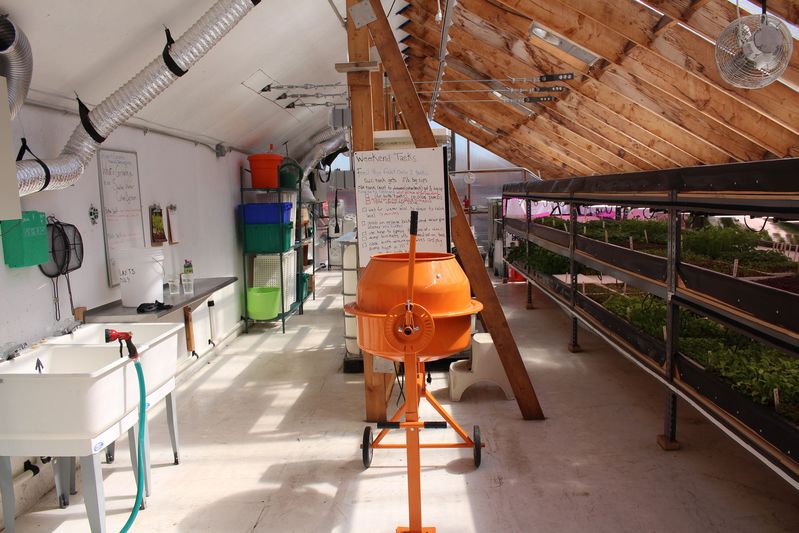 But they flourished under energy-efficient, cooler LED lights. The only problem was that the high cost of these lamps prohibited farmers from using them on a large enough scale. Instead, they turned to sun-soaked greenhouses like the season-extending structures common on California farms, holding “fields” of lettuce and tomato plants. But without the ability to stack the plants into vertical farms — which would block out sun for the lower levels — this solution limits the amount of produce farmers are able to grow.

This past year, due to innovations in technology, the cost of LEDs dropped by 85 percent — making the lights accessible and profitable to indoor farms for the first time. Jason Green, CEO and cofounder of Edenworks, a vertical indoor hydroponic farm in Brooklyn, N.Y., crunched the numbers: In a 9,000-square foot facility with roughly 20-foot high ceilings, they could produce 120,000 pounds of produce annually, or the equivalent of roughly 10 to 15 acres.

Edenworks is one of several indoor farms that have jumped on the favorable price of LEDs, but unlike most vertical indoor farms, which use carefully curated formulas to provide nutrients to their plants, their fertilizer of choice comes from an adjoining tank of tilapia. 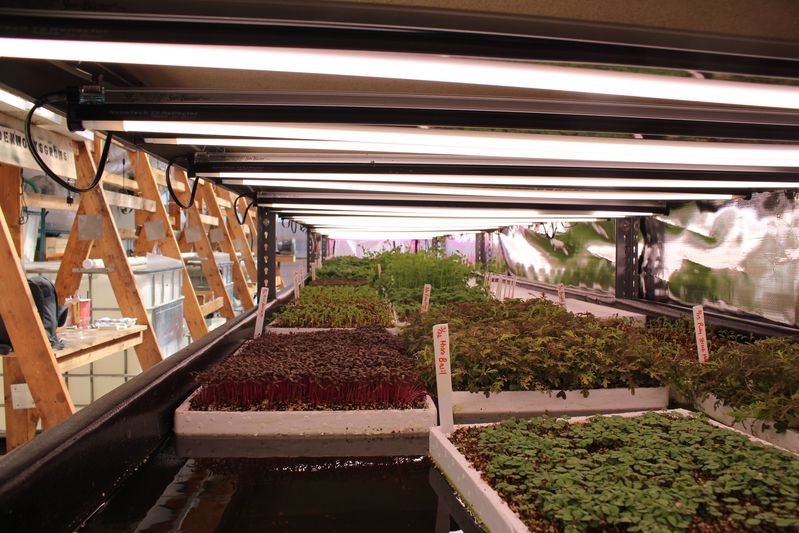 There are three primary types of soil-free indoor vertical farms: hydroponic, aeroponic, and aquaponic. While hydroponic (the most common of the three) and aeroponic both use human-made recipes of fertilizer solutions (often from both organic and synthetic chemicals), plants in an aquaponic system derive their nutrients from fish waste. Aeroponics differs from hydroponics in that the roots dangle free, out of water, and are rehydrated by mist.

Green likened hydroponic farmers’ human-made mixtures to Soylent: “Sure, all the basic components are there,” he said, “but is it as rich as real, whole foods? We would argue no.”According to Green, the greens produced by most hydroponic facilities lack the depth and flavor that aquaponic farms are able to produce from natural fertilizer.

Is one really better than the other?

Viraj Puri, cofounder and CEO of Gotham Greens, a hydroponics facility founded in Brooklyn, argued that using a formula actually yields the healthiest, best product possible. His own company uses a precise mixture of about 80 percent organic fertilizer to 20 percent synthetically-derived nutrients, which are necessary for water solubility. “By using fish waste, you don’t have that same level of control over the nutrition,” he said, “so you can’t drill down to the parts-per-million of nitrogen in the water. You see a much greater variability in the crop quality and taste.”

“The big benefit of hydroponics,” expert and indoor farming consultant David Goldstein told me, “is that I can take one water sample that goes to 1,000 plants and know exactly what those 1,000 plants are receiving and adjust accordingly.” But at the same time, he admitted, blanket statements about farming methods versus other farming methods are never completely accurate: “There are certain crops that work better in hydroponics, and others that work better in soil — even between plant stages, plants’ preferences change.”

When it comes down to it, Yemi Amu — who describes her facility, Oko Farms, as using a hybrid of hydroponics and aquaponics —  said, “Farming is farming. It isn’t soil versus hydroponics versus aquaponics — we need to expand our approach to growing food and embrace sustainable practices however they’re achieved.”

At Edenworks, the fish, kept in a large tank at the end of the greenhouse, are fed a pelletized mixture of non-GMO plants and fish meal. Their excrement then flows through a waste filtration system where it’s broken down. The raw excrement is funneled into a “200-gallon container of bubbling poop” where it’s constantly blasted with oxygen to maintain a healthy pile of compost, while the healthy bacteria and nutrients are sent toward the plants. 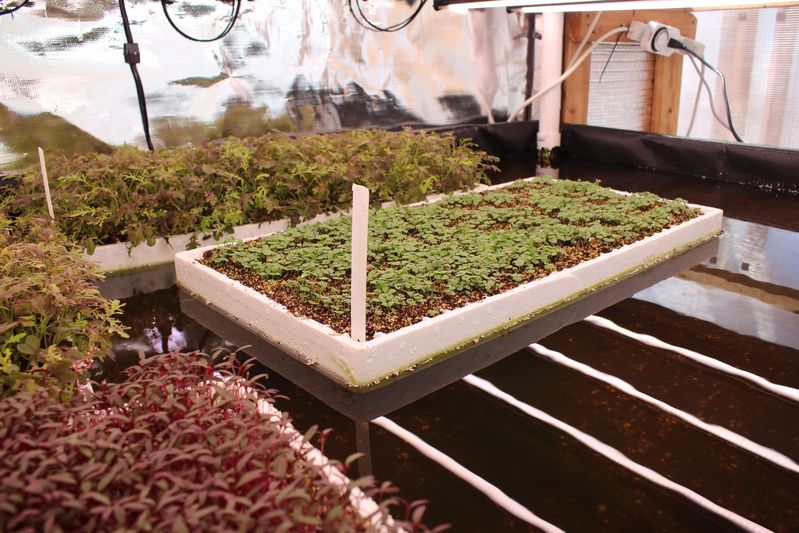 The plants are suspended in floating, styrofoam containers over the fertilizer- and nutrient-rich water.Food52

The plants themselves are suspended in floating, styrofoam containers under LED lights, in individual pods that contain milled coconut husks (coir) and a small amount of vermiculate, pearlite, and seaweed meal for added potassium and phosphate. But even these additives may someday become unnecessary — Green and his team plan to someday create a fish food pellet that would eliminate the need for them. 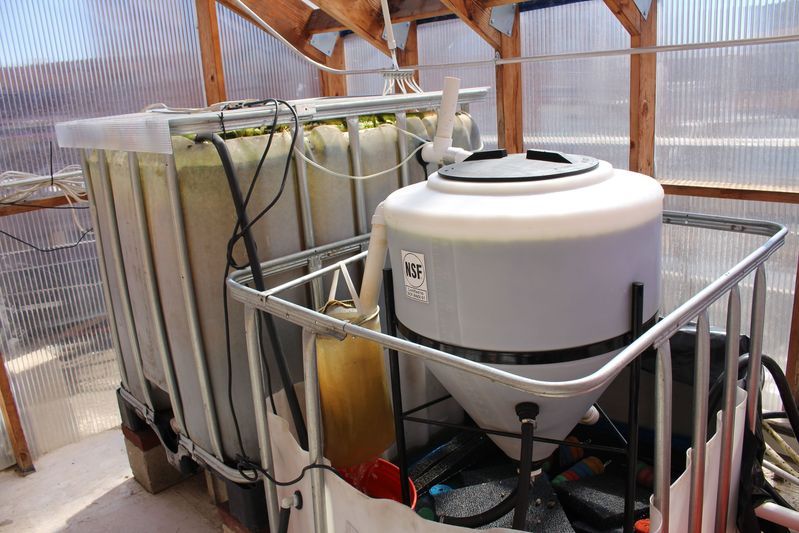 The tank of tilapia (left) and filtration system (right).Food52

If this sounds easy, it’s anything but. The micro-ecosystem here, and those created in other indoor farms, is still fragile. During the hour I was in the Edenworks greenhouse, a computer that monitors the entire system displayed a graph that continuously dipped, then climbed. Debi Zvi, Edenworks’ head of nutrition, explained that the carbon dioxide I produced was enough to throw the system into flux, which sent a signal to the automatically connected fans to kick in and add oxygen back into the system. Without precise data monitors, the entire system could fail. 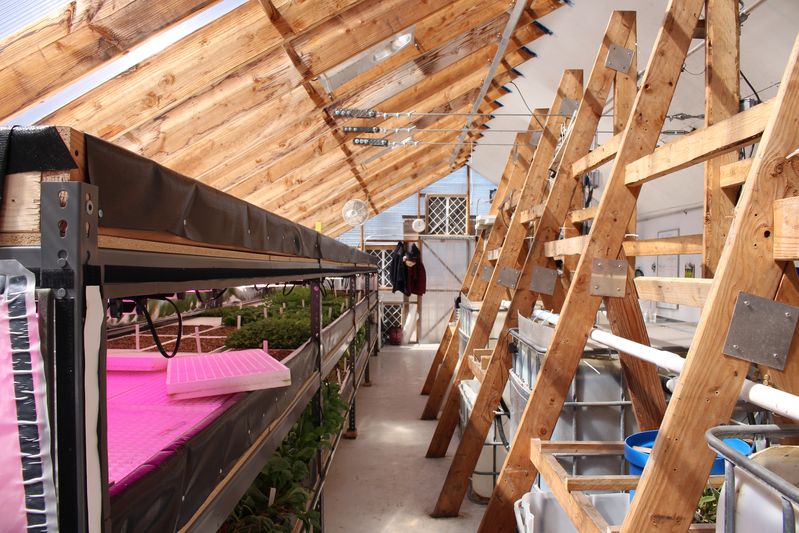 At the same time, many risks that haunt traditional farms are much less important in indoor farms. There are fewer issues from bugs (because indoor farming has shorter crop cycles, bugs like aphids don’t have time to settle in and lay eggs) and far fewer food safety concerns (in aquaponic farming, the fertilizer is coming from a cold-blooded animal rather than from a mammal, like cows, so there’s no risk of E. coli). There’s also a minimized risk of contamination from handling, since it’s possible to automize the seeding, harvesting, washing, and drying — fewer hands touch it.

Once the crops are harvested, they’re also able to make it to the consumer faster. While lettuces travel cross-country from California to New York in the winter, which can take as many as six days, indoor farms like Edenworks can get their products onto shelves within 24 hours of harvest. For those who prioritize eating locally — a market that’s growing twice as fast as organic foods — this can be considered an enormous advantage.