A new article in the journal Science zooms way out to the big picture of humanity’s tenure managing the planet. It does so by zooming in sharply on a neglected, hugely important, enabler of life on Earth: soil.

Soil is the foundation for everything we’ve built — all agriculture and civilization must grow from healthy soils. And we’re heading straight for some hard limits, beyond which soils will no longer support us. Or, as UC Berkeley soil scientist Ronald Amundson and his colleagues put it in this paper, “Soil is the living epidermis of the planet.”

Soil helps regulate the carbon and water cycles — it’s a reservoir for both cycles, buffering them from shocks and feeding us, all at the same time. But, Amundson et al. warn:

Profound changes are on the horizon for these interconnected functions — particularly sparked by changes to climate and food production — that will likely reverberate through society this century. Ultimately, the way in which we directly and indirectly manage our planet’s soil will be interwoven within our future success as a species.

We are already running into a hard limit when it comes to soil nutrients. Plants need nutrients like phosphorus, nitrogen, and potassium to grow. Microbes, certain plants, and human factories can pull nitrogen out of the air (there’s plenty of it in the atmosphere), but the other nutrients have to come either from mining or recycling.

When a farmer harvests a bunch of carrots (say) and takes them to the market, she’s trucking nutrients off the land. When you eat those carrots, you are using those nutrients to build muscles and blood cells, and eventually you flush them down the toilet. The only way to recycle those nutrients is to use human waste as fertilizer.

For a lot of reasons (contamination with prescription drugs, heavy metals, and pathogens in the sewage system) people dislike the idea of turning municipal sewage into fertilizer.

Those flushed nutrients never leave the system in the largest sense, of course: They end up in lakes and oceans and landfills. Phosphorus in the ocean can turn into an algal bloom, which turns into fish, which birds eat and poop out, which we mine for fertilizer. But that cycle takes place far too slowly to meet the needs of hungry humanity.

The only other option is to mine those nutrients, and we are running out:

And the authors point out that these elements are unevenly distributed. The biggest phosphorus mine in the U.S. will be depleted in 20 years, and geopolitical balance of power may get shaken up as nations and corporations begin competing for the remaining reserves in places like Morocco. Oil wars are one thing; at least you can replace oil with other forms of energy. But it’s physically impossible to replace a basic element like P or K. 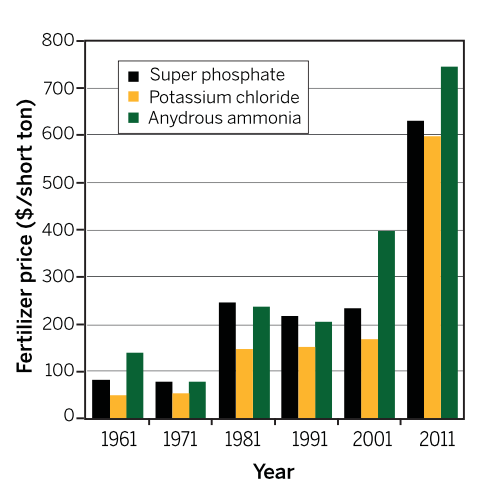 Thinking about soil, of course, also means thinking about climate change, because there are gigatons of carbon (or C) locked up in the earth. We’ve already released a lot of that; indeed, farming has had a greater impact than fossil fuel emissions:

Based on the global agricultural land area, cultivation has likely released between 50 and 70 Gt of C to the atmosphere over the course of human history, and the combined cultivation and biomass burning contributions to atmospheric CO2 exceeded that of fossil fuel emissions well into the 20th century. However, the agricultural imprint on atmospheric greenhouse gas concentrations appeared much earlier in the Holocene.

Soil can also help get us out of this predicament:

Under changed management or through land abandonment, global agricultural soils have the capacity to reapproach their original C storage and regain up to a half a decade of present fossil fuel emissions (over a multidecade period). Better stewardship of domesticated soils that leads to higher organic matter contents is a valuable practice from an ecological perspective and from an agronomic point of view. There is now a large body of research on the rates of C sequestration under differing management practices.

Those management techniques are spelled out in the citations (here are a few of the papers cited). We need to be building up the soil rather than eroding it. And, if we want to avoid fighting wars over phosphorus and potassium, we need to figure out ways of closing the loop so that we’re not simply flushing those elements down the drain.