Lindsey Brackin was in her nightgown, waiting for her husband to finish changing their 6-month-old daughter’s diaper in the other room, when three of the large windows in her bedroom suddenly shattered with a loud boom.

Thinking it was a tornado, Brackin’s first instinct was to hide in the bathroom. But her husband yelled that the nearby chemical plant had exploded and that they had to leave the house immediately. As she packed what she could, Brackin, 33, noticed blood dripping everywhere. A piece of glass had sliced her leg so deep that she had to go to the emergency room. All she could think about was that if the blast had happened a few minutes later, her baby would have been next to her and could have gotten hurt.

“It was the scariest thing I’ve ever heard in my life,” she said. “The thought of my baby getting cut makes me very furious.”

The petrochemical plant, located in Port Neches, Texas, owned by TPC Group, exploded at 1 a.m. on Wednesday, November 27, waking thousands of residents and injuring eight people. In the afternoon, a second explosion occurred. The explosions, which came weeks after the Trump administration rolled back a series of Obama-era chemical safety regulations targeted at just this sort of event, sent thousands of pounds of pollutants into the air, including hydrogen sulfide, carbon monoxide, benzene, and butadiene. The town, blanketed with smoke and debris from the blast, was placed under multiple evacuation orders in the week that followed.

To outside observers, there were signs that the plant was not looking out for the community’s safety. But many Port Neches residents are hesitant to blame TPC Group for the blast.

Port Neches is a predominantly white, affluent town about 90 miles east of Houston with a population of about 13,000. Residents call the area “energy city” for a reason: The oil and petrochemical industry is the backbone of its economy. Port Neches and the surrounding towns of Port Arthur, Nederland, and Groves are inundated with oil refineries and petrochemical plants owned by the likes of Valero, Chevron, and Total Petrochemicals. 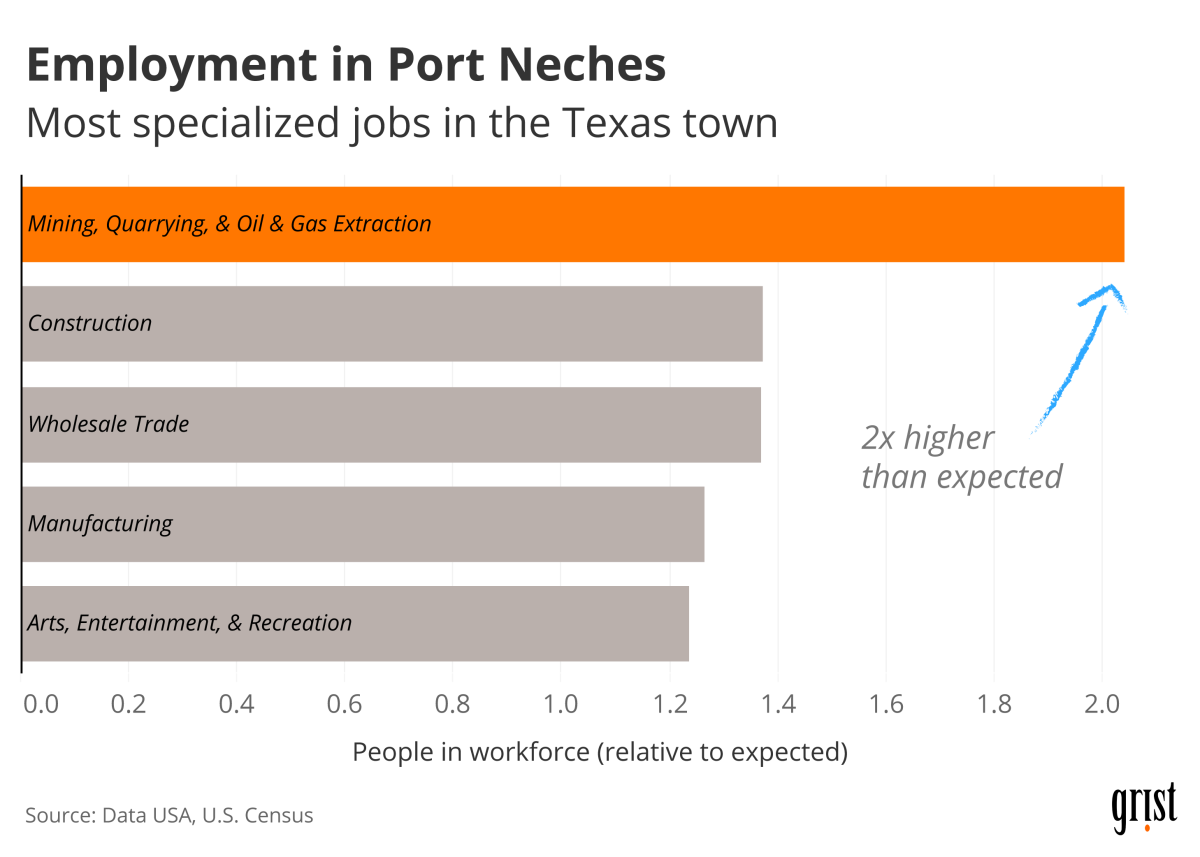 In the days after the explosion, many Port Neches residents used a public Facebook group not only to share information and updates but also to defend TPC. “Let’s all band together and quit kicking TPC while they are already down,” one resident posted. “Let’s show grace.”

When I posted in the group asking about residents’ recollections of the explosions, one member responded, “I just hope you report on how good this small town is and how we always kinda knew something could happen but never expected it. The refineries are literally in our backyards and everyone has someone in their family the refineries provide for.”

Another local commented, “I live a block from the explosion and I have a crap load of damage but … we all in this area provide for our families one way or another through these refineries.” They added, “This is still a free country, and you can move to California where there are wildfires!”

Some Port Neches residents, including Brackin, pushed back against the idea that moving is the only solution for people who don’t want to live in fear of explosions. “[T]he refineries should not be blowing up and should be following safety protocols to prevent this,” Brackin wrote.

“I don’t know why people are so excited to want to live in a place that’s poisoning them,” Brackin, who says she can’t afford to move out of her family home, told me later. “It’s ridiculous.”

The TPC Group plant that exploded manufactures butadiene, which, according to the company, is used to produce synthetic rubber for hoses and tires, and has a long history of state and federal environmental violations, according to The Texas Tribune. The facility has been fined for avoidable air pollution infractions by the Texas Commission on Environmental Quality and U.S. Environmental Protection Agency more than a half-dozen times in the past five years.

“I don’t think this is the case where the facility has been a wonderful neighbor and that this is some sort of anomaly,” said Elena Craft, the senior director for climate and health at the Environmental Defense Fund. “This is a case where you have a repeat offender, who has consistently and routinely compromised the personal health and well-being of the community that live around it.”

TPC Group did not respond to questions about how the environmental violations related to the accident — and whether or not the company could have reasonably prevented the explosions.

Craft said that because violations and safety incidents happen so regularly at petrochemical plants, especially in “oil-friendly” Texas, nearby residents have come to accept it as part of the risks of living and doing business in the area.

“In some cases, many of these communities don’t recognize that it does not have to be this way,” Craft said. “These disasters are preventable in large parts, the state could be doing more, and having a job shouldn’t cost you your life, livelihood, or your health.”

There’s a lot less acceptance in Port Arthur, a predominantly African American community about five miles south of the plant, which has faced pollution and health risks from chemical facilities for decades. 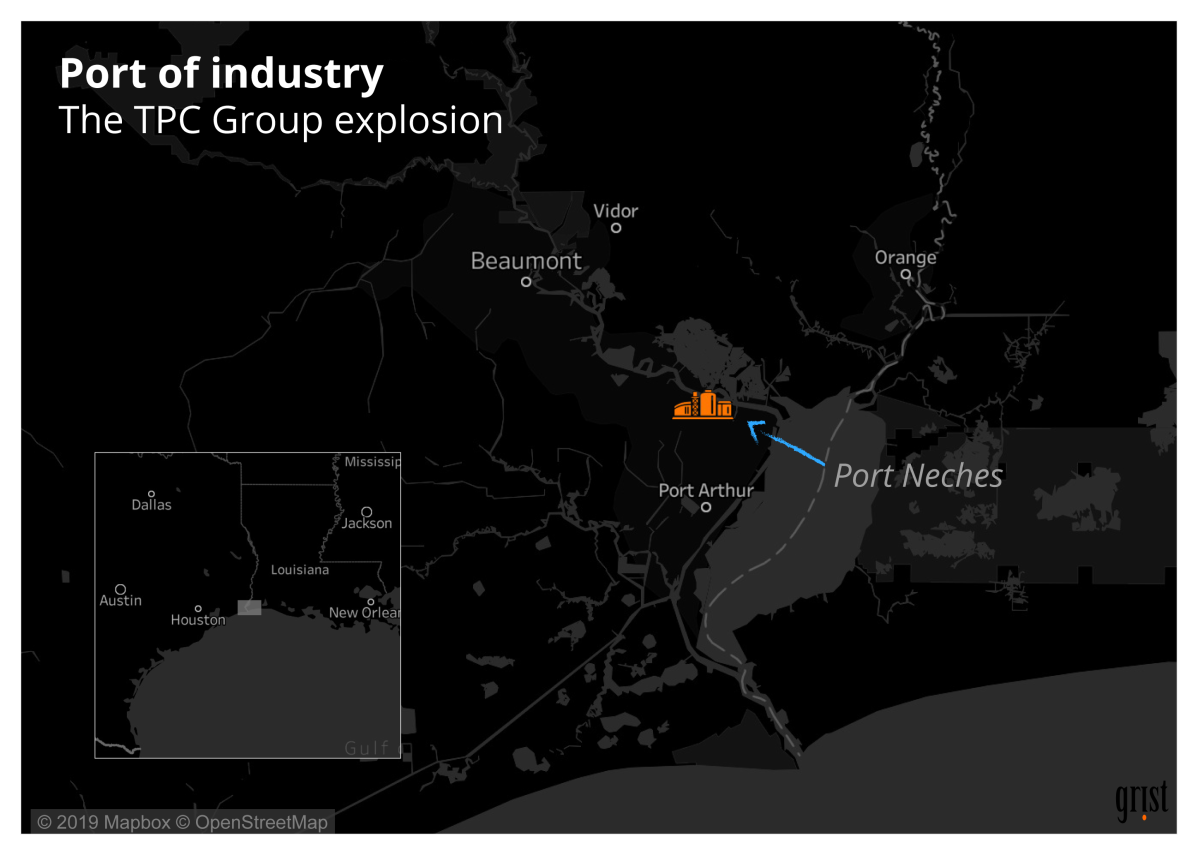 “Port Neches has their fair share of refineries, but the difference is that those refineries and chemical plants cater to and help that community without question,” said Hilton Kelley, a longtime environmental advocate and resident of Port Arthur. He explained that Port Neches has better schools, banking institutions, and employment opportunities than Port Arthur.

“At Port Arthur, we have to fight to get support, we have to beg them to help us, but the more affluent or the more Anglo communities get the maximum support from judges, mayors, and city officials,” he said.

Kelley told me he once walked around Port Neches, knocking on doors, and asking residents if they wanted to know more about air pollution and the environmental hazards associated with petrochemical plants. But he said very few people cared to listen to what he had to say.

It’s also been decades since Port Neches experienced an explosion of this magnitude. Kelley said that locals might start caring about the environmental and health hazards the industry poses, now that it’s once again happening in their backyards. “In my advocacy work, I always mention that most people don’t give a damn about air quality until it hits them right where they live,” he said.

So far one lawsuit has been announced against TPC in relation to the explosion: the widow of a 53-year-old Groves resident who died 30 minutes after the blast plans to file a wrongful death lawsuit against the company.

And several local and Houston-based law firms have filed temporary restraining orders against TPC Group, demanding that it preserve all evidence from being destroyed or lost as the Chemical Safety Board investigates the causes of the explosion.

Doris Humplik, 51 and a resident manager at a storage facility in Port Neches, used to be one of those people who didn’t think about the environmental and health hazards associated with the petrochemical plants and oil refineries in the area. But after the explosion, she said her views had changed.

“I am not one of those environmental people, or I haven’t been like that before,” Humplik said. “But this event has changed it. Normally, I wouldn’t think about the air or the black coloring in the door knobs, windows, or anything. I realize now that I’m in a situation that’s potentially going to give me cancer. There’s fear, and it’s made me aware of a lot of things.”